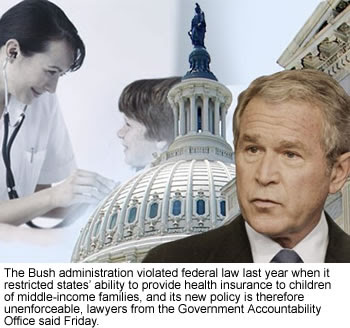 President Is Rebuffed on Program for Children
By Robert Pear / April 19, 2008

The ruling strengthens the hand of at least 22 states, including New York and New Jersey, that already provide such coverage or want to do so. And it significantly reduces the chance that the new policy can be put into effect before President Bush leaves office in nine months.

At issue is the future of the State Children’s Health Insurance Program, financed jointly by the federal government and the states. Congress last year twice passed bills to expand the popular program, and Mr. Bush vetoed both.

State officials of both parties say the policy, set forth in a letter to state health officials on Aug. 17, has stymied their efforts to cover more children at a time when the number of uninsured is rising and more families are experiencing economic hardship.

In a formal legal opinion Friday, the accountability office said the new policy “amounts to a marked departure” from a longstanding, settled interpretation of federal law. It is therefore a rule and, under a 1996 law, must be submitted to Congress for review before it can take effect, the opinion said.

But Jeff Nelligan, a spokesman for the federal Centers for Medicare and Medicaid Services, said, “G.A.O.’s opinion does not change our conclusion that the Aug. 17 letter is still in effect.”

The letter told states what steps they needed to take to be sure the children’s health program would not displace or “crowd out” private coverage under group health plans. The White House cited the policy as a justification for rejecting a proposal by New York State to cover 70,000 additional youngsters.

What happens next is not clear. New York, New Jersey and several other states have filed lawsuits challenging the Bush administration policy. In addition, Congress may consider legislation to suspend the directive.

Deborah S. Bachrach, a deputy commissioner in the New York State Health Department, said, “The opinion from the Government Accountability Office vindicates our position that the federal government did not have authority to issue the Aug. 17 directive.”

The 1996 law, the Congressional Review Act, was enacted to keep Congress informed about the rule-making activities of federal agencies. If Congress objects to a new rule, it can pass “a joint resolution of disapproval,” which the president can sign or veto.

Under the Aug. 17 directive, states cannot expand the Children’s Health Insurance Program to cover youngsters with family incomes over 250 percent of the federal poverty level ($53,000 for a family of four) unless they can prove that they already cover 95 percent of eligible children below twice the poverty level ($42,400).

Moreover, in such states, children who lose or drop private coverage must be uninsured for 12 months before they can enroll in the Children’s Health Insurance Program, and co-payments in the public program must be similar to those in private plans.

The legal opinion was requested by Senators John D. Rockefeller IV, Democrat of West Virginia, and Olympia J. Snowe, Republican of Maine. In view of it, they urged the administration to rescind the Aug. 17 directive.

The administration told states they must comply with the directive by August of this year or else they face “corrective action.” Compliance could mean cutting back programs.

The Justice Department contends that the letter is “merely a general statement of policy with nonbinding effect,” But Gary L. Kepplinger, general counsel of the accountability office, said administration officials had treated it as “a binding rule.”

This entry was posted in RagBlog and tagged Bush, U.S. Government. Bookmark the permalink.