Let the Oil Execs Answer to the Facts 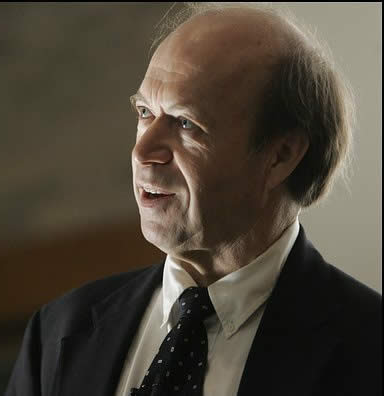 James Hansen, one of the world’s leading climate scientists, will today call for the chief executives of large fossil fuel companies to be put on trial for high crimes against humanity and nature, accusing them of actively spreading doubt about global warming in the same way that tobacco companies blurred the links between smoking and cancer.

Hansen will use the symbolically charged 20th anniversary of his groundbreaking speech (pdf) to the US Congress – in which he was among the first to sound the alarm over the reality of global warming – to argue that radical steps need to be taken immediately if the “perfect storm” of irreversible climate change is not to become inevitable.

Speaking before Congress again, he will accuse the chief executive officers of companies such as ExxonMobil and Peabody Energy of being fully aware of the disinformation about climate change they are spreading.

In an interview with the Guardian he said: “When you are in that kind of position, as the CEO of one the primary players who have been putting out misinformation even via organisations that affect what gets into school textbooks, then I think that’s a crime.”

He is also considering personally targeting members of Congress who have a poor track record on climate change in the coming November elections. He will campaign to have several of them unseated. Hansen’s speech to Congress on June 23 1988 is seen as a seminal moment in bringing the threat of global warming to the public’s attention. At a time when most scientists were still hesitant to speak out, he said the evidence of the greenhouse gas effect was 99% certain, adding “it is time to stop waffling”.

He will tell the House select committee on energy independence and global warming this afternoon that he is now 99% certain that the concentration of CO2 in the atmosphere has already risen beyond the safe level.

The current concentration is 385 parts per million and is rising by 2ppm a year. Hansen, who heads Nasa’s Goddard Institute for Space Studies in New York, says 2009 will be a crucial year, with a new US president and talks on how to follow the Kyoto agreement.

He wants to see a moratorium on new coal-fired power plants, coupled with the creation of a huge grid of low-loss electric power lines buried under ground and spread across America, in order to give wind and solar power a chance of competing. “The new US president would have to take the initiative analogous to Kennedy’s decision to go to the moon.”

His sharpest words are reserved for the special interests he blames for public confusion about the nature of the global warming threat. “The problem is not political will, it’s the alligator shoes – the lobbyists. It’s the fact that money talks in Washington, and that democracy is not working the way it’s intended to work.”

A group seeking to increase pressure on international leaders is launching a campaign today called 350.org. It is taking out full-page adverts in papers such as the New York Times and the Swedish Falukuriren calling for the target level of CO2 to be lowered to 350ppm. The advert has been backed by 150 signatories, including Hansen.