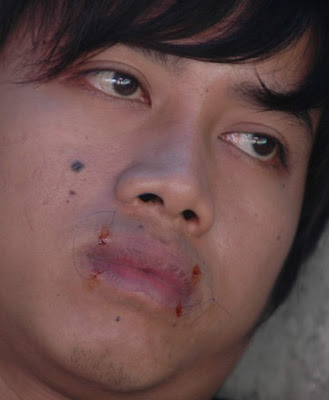 East Kalimentan is in Indonesia. The report below is exactly as dragono has written it.

Seven students of Universitas Mulawarman in Samarinda (capitol of East-Kalimantan), continues the protest upon the raising of fuel price by sealing their lips (sewing it, literally) and avoid to eat and drink for several days ahead..

Unfortunately, they avoided to tell the press, who has professionally permitted them to do that action.. And they also said that this action will be continued until one of them falls down..

They are Edi Susanto, Heri Setiawan, Gito Gamas, Eka Fauzi, Ronny, students of Faculty of Social and Political Science. Next to them there’s Ahmad Syafii from Independent Community and Yono, one of high school student.

Until now they’ve been holding the protest in front of the main gate of Universitas Mulawarman. In a small tent, they’ve been accompanied by several students that giving oration and spreading the fliers..

Moreover, the protesters said that their parents support and allow them to do this action.

This entry was posted in RagBlog and tagged Civil Disobedience, Energy, World Opinion. Bookmark the permalink.