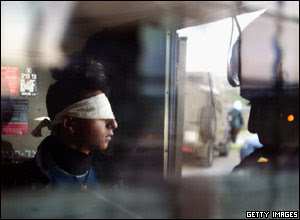 This is not the specific photo that Levy references.
Twilight Zone / Blindfolded
By Gideon Levy / October 4, 2008

Take a quick look at the photo before you. We took it last fall by chance. In the course of another interminable wait at the Hawara checkpoint, on our way to another story in Nablus, we saw this man being arrested. Bingo, the game of the checkpoint soldiers. We didn’t know his name, why he was arrested or when he’d be released, if ever. But we noticed his proud bearing – solitary, upright. His eyes were already covered by the IDF-issue flannel, the type meant for cleaning guns, and his wrists were about to be bound with plastic handcuffs. We seemed more upset by his sudden arrest than he was. After 41 years, the Palestinians are used to it, that on any ordinary day, on the way to or from work, everything might be abruptly turned upside down.

This was a routine year, another year of the occupation of which no end is in sight. From Rosh Hashana 5768 to Rosh Hashana 5769 our forces killed 584 Palestinians, 95 of them minors. Many fewer than in 2002, when 989 were killed; many more than in 2005, with 190 killed. Eighteen Israelis were also killed in the past year, many more than in the previous year, when just five were killed, and much less than in 2002, when 184 Israelis were killed. All in all, an average year for bloodshed.

All of this was observed by Israeli society with eyes covered. Even the nearly 60 Palestinians who were killed on one black summer day in Gaza barely earned a mention in the newspapers. With eyes covered, Israeli society continued to look at the routine of the occupation, the mothers in labor who lost their babies at checkpoints, the farmers victimized by lawless settlers, the night raids, the unemployment, the poverty and the hope that died long ago.

In the past year we’ve barely heard about life under siege in Gaza. For two years now, we, the handful of Israeli journalists who seek to fulfill their journalistic mission, have been prohibited by Israeli orders from entering Gaza. When I questioned Defense Minister Ehud Barak a few weeks ago he seemed unaware of the ban. He instructed an aide to look into it, but of course we never heard back. us. It’s not all that surprising that Israel’s defense minister hasn’t heard about Israeli journalists being prevented from covering Gaza under orders from his own defense establishment: Gaza doesn’t interest anyone in Israel.

And so another year has passed, and our eyes remain blindfolded. 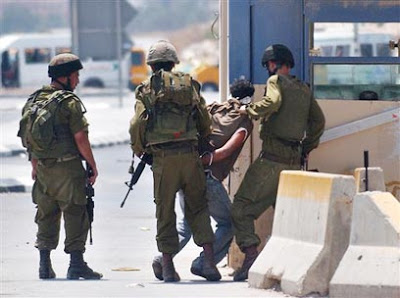 With the tiny flashlight still in our possession we tried here, during the past year, to shine a few pale beams onto the routine of life under the occupation. It’s thankless work whose harvest few want, but we persevered. A few gleanings from the shadowy backyard of the state, the only democracy in the Middle East.

In the middle of one night in early 5768 IDF soldiers charged into homes in the Ein Beit Ilma refugee camp in Nablus, hunting for a wanted man. They went from one dwelling to the next by wrecking the walls. Gaping holes in the living rooms of meager homes, kitchens destroyed, and one terrified little girl standing amid the rubble, washing dishes. A few weeks later it was the turn of an old couple in Nablus. For an entire night the Wazirs were alone, trembling with fear in their small house while gunfire and explosions sounded outside, until an order to leave the house was issued. Abdel Wazir, the uncle of the legendary Abu Jihad (Khalil al Wazir), walked outside and was immediately shot dead by soldiers. He was 71, the oldest shahid.

Then we told the story of Ma’ida al-Akel, who went to Jordan to visit her ailing mother and was barred from returning, possibly forever, to her husband and six children. The following week we described the Hashlamouns of Hebron. Nora and Sami were placed under administrative detention – no trial, no charges. The grandmother of their six children is doing her best to look after them.

The 63-member Qa’abneh family, Bedouin, were cut off from their source of livelihood by the separation fence near Bir Naballah. In the Tarqumiya area, 150 refugees from 1948 became refugees a second time when they were expelled from their houses this year, due to construction of the checkpoint. Mohammed Ashkar was shot in the head point-blank killed during riots at Ketziot Prison; at home, his brother Lo’ai, paralyzed in the legs from Shin Bet torture, waited for him. Another prisoner, Imad Khotri, tortured by “Major Effi” from the Shin Bet, was left paralyzed in the arms, in Kishon Prison. Unemployed gardener Firas Kaskas was killed on a nature hike with friends at a wadi near Ramallah, leaving behind three daughters – shot at very long range by soldiers.

The IDF, the Border Police and the Shin Bet weren’t alone: Last year was mainly the year of the settlers. In recent months their rampages have escalated terribly, while the IDF and police stand idly by – and in at least one instance, join in. They sowed fear and destruction in a reprisal action in the village of Al-Funduq: Five settlers from Havat Gilad beat up shepherd Hashem Ahmed, 51, so badly he needed hospitalization. On several occasions settlers from Asael have attacked members of the Abu Awad family, shepherds from the South Hebron hills, and destroyed all their meager possessions. In the wake of the article on this case a good-hearted, well-known Israeli who wished to remain anonymous made a very generous donation to the family and a doctor Physicians for Human Rights arranged for four of the family’s children, who have a serious skin condition, to be examined at his hospital. A neighboring family, the Abu Qabeitas, were attacked by settlers from Sussia and Beit Yattir. They set fire to homes, poisoned sheep and even fired mortars.

Killed in the line of duty: Palestinian police officer Mohammed Salah, who dared to stop a car of Israeli undercover agents at a police checkpoint in Bethlehem. They killed him right after he opened the door of their car to check it. And then there were the babies born under a bad sign: Kifah Sider was forced to give birth on the road in the freezing cold winter in Hebron, after being delayed at the Tel Rumeida checkpoint. Her baby is healthy, but the Abu Radas were less lucky: For 75 minutes Mu’ayyad begged in vain for his wife to be allowed through the Hawara checkpoint to get to the hospital in Nablus. She gave birth – to a stillborn – at the checkpoint.

Meanwhile, Fawziya al-Daraq arrived at the Tuk Karm checkpoint after a major heart attack. Her husband pleaded for them to be allowed through to the hospital in Tul Karm. They were turned away from the checkpoint, and Fawziya died.

Ghassan Burqan also wanted to get through a checkpoint, to reach his home in Hebron’s Tel Rumeida quarter. Ghassan was carrying a new washing machine on his head, a gift for his wife. The Border Police officers claimed he tried to attack them with the washer, and destroyed it, Fortunately, the military judge released him, and a loyal Israeli reader bought him a new washing machine.

Omar Alian’s family was forced to wait 12 hours after he died of cancer at his parents’ home before they were permitted to return his body to the other side of the checkpoint sealing off Jerusalem’s Sheikh Sa’ad neighborhood. On another occasion, Israeli soldiers fired at a new Mercedes-Benz taxi at the Gush Etzion junction, with a family, including a baby, inside. When they found out they’d endangered the life of an innocent family they confiscated the taxi for “investigation.” It was returned a few days later, ruined.

Soldiers stole thousands of shekels worth of jewelry from Mohammed Abu Arkub, a barber. In a late-night search a neighbor, tile-layer Sami Huatra, was shot twice for no reason, and left to bleed for a long time. Fadi Darabiya was kicked so hard in the groin by soldiers that he lost a testicle. Other soldiers shot a nearly blind youth, Ahmed Sabarna, from Beit Umar, when they suspected he was somehow throwing rocks at them.

“Captain Joe,” as one army officer is known, left behind threatening, Mafia-style fliers in Azun, in the name of the Israel Defense Forces. “Captain Joe will come into the village and shoot deadly gunfire at the residents, arrest the children and shut down the shops,” warned his missives. Another “captain,” from the Civil Administration, was responsible for the destruction of the spectacular terraces of the Beit Ula fields. Two years of hard work and a major contribution from the European Union down the drain in two hours.

This year soldiers also abducted two shepherds in the Jordan Rift Valley and held them prisoner all night, while other soldiers helped search for them. The father of the young videographer from Na’alin was also arrested by soldiers. Jamal Amira sat in prison for 26 days, for no reason. His only sin: the video shot by his daughter, Salam, who dared to document the shooting of a bound Palestinian by a soldier and brigade commander in Na’alin.

After all this and more, many were amazed that members of a delegation of human rights activists from South Africa who visited Nablus with us this year, including two Supreme Court of Appeals justices, said the Israeli occupation was much worse than apartheid. Wishing everyone another good year of occupation.