Ask a Tuvaluvian If Global Warming Is a Myth 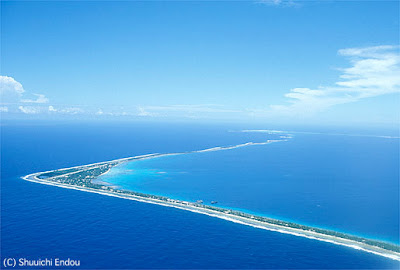 The Pacific island of Tuvalu is facing a near certain death as global warming raises the sea level.
Sinking Tuvualu wants our help as ocean levels rise
By Brad Crouch / October 4, 2008

THE first nation likely to be overwhelmed by climate change wants Australia to accept its entire population if sea levels continue to rise.

Tuvalu, in the South Pacific, is one of the world’s lowest-lying nations and faces inundation within a generation by rising tides linked to mankind’s impact on the climate.

In a week where Ross Garnaut delivered his climate change report, the Tuvalu issue poses a question for Australia: Do we take on other countries’ problems as well?

In a twist with far-reaching implications, Tuvalu Government officials and community elders are hoping in a worse-case scenario Australia will accept the entire population of about 10,000 and allow them to continue to function as a sovereign nation, in the hope of one day returning to their island home.

Tuvalu Prime Minister Apisai Ielemia visited Canberra in August in what Tuvalu officials described as a “secret visit” to float the migration plan. Australian officials have refused to comment on the meeting.

Such an unprecedented environmental evacuation could become the model for other low-lying nations such as Kiribati and the Maldives, which face being swept away by rising tides.

Data from groups including the Intergovernmental Panel on Climate Change and the CSIRO indicate mass evacuation may need to happen within decades.

A gauge installed in 1993 shows the sea level at Tuvalu has been rising by 5.7mm a year.

Most of Tuvalu is just 1m above the high-tide mark and water already bubbles up through the porous coral during high tides, flooding the land during king tides.

Projections show that over the next century sea levels will rise by up to 0.8m, making Tuvalu uninhabitable.

Several islands have been lost to the sea in the past decade and there has been widespread shoreline erosion and salt contamination of areas used to grow the staple root crop pulaka.

Research by the Tuvalu Meteorological Service shows the nation, which has just 26sqkm of land area, has lost several per cent of that in recent years.

Tuvalu Government spokesman on climate change Kilifi O’Brien said the Government was drawing up contingency plans for a mass evacuation.

But he said any such evacuation would revolve around maintaining Tuvalu as an entity.

“If we lose our land we risk losing our identity,” Mr O’Brien said.

“We know if the worst comes to the worst, we would have to relocate.

“The Government is considering how to do this, and Australia is certainly seen as an option.”

Foreign Affairs Minister Stephen Smith declined to be interviewed about whether Australia would take Tuvaluans as refugees or whether the Government would allow a sovereign nation to operate within Australia.

But in a statement his office said Australia would, where necessary, consult with others in the region “how best to respond to the needs of people displaced by the impact of climate change”.

The Niue Declaration on Climate Change, recently agreed by Pacific Islands Forum leaders, including Prime Minister Kevin Rudd, recognises the desire of the Pacific peoples to continue to live in their own countries and the importance of retaining the Pacific’s social and cultural identity.

The [Australian] Federal Government has committed $150 million over the next three years to climate adaptation needs in the Asia-Pacific.

And then there’s this, Tuvalu as the first nation that exists only virtually:

Tuvalu’s sinking, but its domain is on solid ground
By Kevin Manney / April 28, 2004

Of all the dot-com bubble fantasies gone awry, none could be more bizarre than the story of the tiny island nation of Tuvalu.

In the late-1990s, Tuvalu was supposed to get rich by selling access to its Internet domain, which happens to be .tv — funny, since the entire nation has not a single broadcast TV station.

If all went as planned, by now the 11,000 or so Tuvaluans would be living in McMansions, driving to the beach in Hummers and getting regular Botox treatments.

Instead, the money is more of a trickle, and Tuvalu has a much bigger problem: The entire Tuvalu land mass — nine slender South Pacific islands and atolls — is apparently doomed to sink beneath the ocean. Earlier this year, Tuvalu came the closest yet to vanishing.

Oddly enough, Tuvalu might then leave a legacy imagined only in science-fiction novels. It could become the first virtual nation — a country that exists only on the Internet. If Tuvalu’s land disappears, its population will disperse, yet Tuvalu under international law will remain a sovereign nation even though its only “real estate” will be the .tv Internet domain.

While all this is going on, neighboring South Pacific island nation Palau is started down a similar path. It recently signed over rights to its domain — .pw — to a Massachusetts tech company that promises a more reasonable financial outcome for the Palauans. Of course, it helps that Palau is not about to burble beneath the waves.

This South Pacific tale begins amid the 1990s madness for Web addresses, when some addresses were selling for millions of dollars. Speculators bought up every word in the dictionary — even the likes of hookworm.com and supercilious.com — certain they could sell each one of them for a bundle to some start-up.

Then people realized it was possible to register a Web address in another country and use its domain. That would open up whole new swaths of Web real estate. Every country has its own top-level domain — Afghanistan is .af; Ghana is .gh. Since the Net is boundary-less, Amazon.gh could theoretically be as accessible as Amazon.com.

Of all the world’s countries, none had a more exploitable domain assignment than Tuvalu. The letters TV are linked to entertainment in just about every language.

So entrepreneurs from the USA, Japan and Europe descended on Tuvalu, where the prime minister works in a two-bedroom house and most of the population subsists on the fish caught each day.

The first guy offered $5,000 but shortsightedly backed out when the parliament held out for $10,000. By the time it was over, Tuvalu had a 12-year contract to share revenue from .tv registrations to be marketed by a start-up company called DotTV, which was backed by $50 million from California high-tech incubator Idealab.

Tuvalu expected a windfall. DotTV predicted every entertainment company would want a .tv address. At the time, its executives cited examples such as sony.tv, nbc.tv and zee.tv — the last for India’s Zee TV network.

This being the era when people talked of initial public stock offerings before a company’s bathroom needed its first replacement roll of toilet paper, DotTV anticipated a big IPO. The company even said it would create a .tv portal.

Of course, in 2000 the dot-com bubble blew apart, and the value of Web addresses dove like a pelican after a fish. No .tv boom ever happened. Today, nbc.tv is a dead end, sony.tv is for sale, and zee.tv bounces to sheeraz.com, the Web site of Southeast Asian television entrepreneur Sheeraz Hasan.

According to Web monitor Hitwise, the most popular .tv site is Fox’s kids site, foxbox.tv. It gets a market share one-hundredth that of the top television-based Web site, espn.com. In the meantime, DotTV was sold to Internet company VeriSign, and recent news reports say Tuvalu’s Internet revenue is used primarily to pave roads.

That alone would be a heck of a dot-bust sob story, but then there’s the part about Tuvalu sinking.

The islands are, at best, 15 feet above sea level. Unusually high tides have started flooding the islands — not by creeping up the beaches, but by bubbling up through the ground, as if the islands were leaky boats. Prime Minister Saufatu Sopoaga has been jetting around the world in a panic, telling anyone who will listen that Tuvalu will be the first victim of global warming. As sea levels rise, tourists might soon be able to see Tuvalu only by snorkel.

Now, that brings up a question: What happens to a domain if a nation disappears?

VeriSign spokesman Tom Galvin tells me that a defunct country’s Internet domain lives on. For instance, you can still find addresses on .su — the domain for the Soviet Union.

Anyway, as Galvin points out, Tuvalu would not necessarily cease to exist. Apparently, the laws of the sea say that a country is a country, even if underwater. Sopoaga has said in speeches, “Our sovereignty would not be threatened. Our claim would be maintained on this spot.”

Which is how you get to the point where Tuvalu could have a government, a people — albeit a diaspora — but no territory. Yet Tuvalu would exist on the Internet as .tv. Sci-fi novels such as Neal Stephenson’s Snow Crash predict virtual nations. Tuvalu might someday be revered as a trendsetter.

Along the way, we can watch Palau’s adventure unfold. This year, it sold rights to .pw to a Woburn, Mass., company called PW Registry, which wants to market the domain for “personal Web” sites. “Individuals will eventually establish a permanent presence on the Internet, just like companies do,” says PW Registry founder Tom Barrett. And .pw would be the place for them, he says.

Palau could turn out to be a better story. The nation isn’t starting with mania-driven expectations. Its 20,000 citizens are also counting on a future in tourism. It is building its first golf course and later this year will launch its national airline, which will consist of a single Boeing 737.

The only thing I can’t figure out is why this hasn’t happened yet in the Bahamas.

Kevin Maney has covered technology for USA TODAY since 1985. His column appears Wednesdays. Click here for an index of Technology columns. E-mail him at: kmaney@usatoday.com.