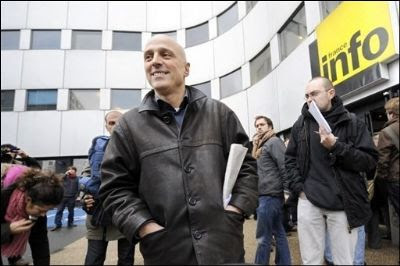 This over the top arrest by French cops and their strip search of a journalist for a “libel charge” has the Paris press up on arms.

News that a newspaper’s director was arrested at home, handcuffed and strip-searched led French journalists’ unions to call for protests on Monday.
December 1, 2008

PARIS – French journalists’ unions on Sunday called for protests after a director at the leftist newspaper Liberation was arrested at his home, humiliated in front of his sons, handcuffed and strip-searched.

Vittorio de Filippis, the newspaper’s director for development, said three police officers turned up at his house in the early hours on Friday to take him in for questioning over a libel suit lodged by the head of a Internet provider service in January 2007.

During the five hours that he was held at the police station in the Paris region, he was handcuffed, strip-searched twice and interrogated without a lawyer.

“This is unprecedented in France,” Filipis told AFP. “No director of a publication has ever been subjected to what I was forced to subject to.”

The journalist was cited in a complaint lodged by Xavier Niel, head of the Free Internet provider, for libel over a commentary posted on the newspaper’s website in response to an article on Niel’s legal problems.

Police sources told AFP that the judge ordered the arrest after Filippis refused to answer a previous subpoena.

“My eldest son, who is 14, witnessed this scene. His brother, 10, did not come out of his room but I later learned that he was awake,” Filippis recounted in Liberation.

“I barely had time to reassure my son that I was not a crook and that this had to do with the newspaper.”

At the station, Filippis said he was forced to undress and was subjected twice to body cavity searches.

Liberation’s lawyer Jean-Paul Levy said he was outraged by the police treatment in a case that is “not even punishable by jail time”.

Two unions, the SNJ-CGT and CFDT, called for a protest Monday to express outrage over the police methods used against Filippis and call for respect for journalists’ rights.

This entry was posted in RagBlog and tagged France, Journalists, Newspapers, Police Harassment. Bookmark the permalink.