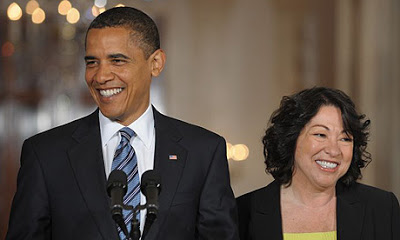 When news broke last month that a Boricua from the South Bronx, a woman, was being considered for a seat on the U.S. Supreme Court, I bet a Native American co-worker a box of pencils that she’d never get the seat.

Then yesterday, President Obama announced that 2nd Circuit Court of Appeals Judge Sonia Sotomayor had, in fact, received the nomination.

After I fainted, picked myself up off the floor, and brushed myself off, I began to ponder what had fed my inner cynic (which I generally keep under lock and key) so much defeatism that the very idea of a Boricua woman becoming a Supreme Court justice sounded to me like, well, the sci-fi version of a Horatio Alger novel (emphasis on the sci-fi). Why did it seem so wildly surreal — even extraterrestrial — to me that, through dint of hard work, talent, her family’s support, sacrifice (and a little luck), a woman like Sotomayor, no matter how qualified, could ever be nominated by a President to serve on something as sacrosanct as the Supreme Court?

Maybe it’s because I’m so used to hearing people in decision -making or -influencing positions dismiss the credentials of highly qualified Latinas just because they can (and because so few protest when they do), that I doubted there was any hope that, even if God were to descend to announce His support for a puertorriqueña Supreme Court Justice, she’d have any better than a 50/50 chance of getting considered on her own merit. That is, of course, presuming that she’s a moderate conservative, a centrist, a liberal, or (eek!) an actually existing leftist. We all know that, at least for the past decade or so, the political fast-track to celebrity for an ultra-conservative Latina with more ambition than intellect (or any other qualification) is a yellow brick road paved by the Heritage Foundation (am I the only blogger old enough to remember Linda Chaves?).

My inner cynic has been well fed for weeks now too in the blogosphere, which has been littered with sensationalist commentaries, slathered in both overt and thinly veiled bigotry, about Sonia Sotomayor: “She’s a bully!” “She’s not really that smart!” and other drivel that suggests it might be ok, in public evaluation of a potential Supreme Court Justice (who, mind you, currently holds a seat on a Circuit Court, i.e. belongs to the nation’s second-highest judicial echelon), to revert to the name-calling used on elementary school playgrounds. Did the criticism of any of the others on the widely publicized short list take on such a condescending and infantilizing tone? (If it did, I didn’t see it.)

My inner cynic got enough sustenance that it escaped its shackles and started running loose as a snarky post-atomic Gila monster. Now it is nibbling on the mainstream media, especially their inability to make sense of why this nomination is so historic. The coverage — which is so far all about reading Sotomayor’s nomination as a leftist coup, and which is equally disinterested in what President Obama himself described as her “sterling” qualifications — completely ignores, for example, what this nomination means in the historical context of U.S. colonialism in Puerto Rico, or the long history of violent and peaceful struggle against that colonial relationship, or the mass migration of Sotomayor’s parents’ generation to the states that was engineered by U.S. maldevelopment policies, or the history of the South Bronx as a Boricua ghetto, not to mention the enormous odds (plug in any quality of life stat) that her success story means she overcame.

Obviously, we don’t expect anything but shoddy faux journalism from the far right. But will Rachel Maddow or Keith Olbermann — the supposed rugged left of the lefty prime time media — care enough to do their homework and get it right?

Probably not, which is a shame. Or maybe that’s the Gila monster talking.

The sad thing is, my many years of striving in another sacrosanct American institution — academia — have often fueled my cynicism. I’m a Boricua scholar whose parents were born and raised in the South Bronx. They worked heroically, like Celina Sotomayor (Sonia’s mom), to give their children a better start in life than they had had. Yet too often I’ve found that, in my career, the proverbial glass ceiling looks more like a steel door viewed from a vipers’ pit (with walls paved in wet limestone).

But now, thanks to President Obama, I have to rethink all this; I need to come to terms with the fact that I’ve been force-fed a big dose of hope.

I have to admit, it tastes good. Obviously, I’m not re-caging the Gila until the confirmation hearing is over in the Senate, and I’ll be keeping close watch on the coverage until then. But — dare I say it aloud? — I really really hope I owe someone a box of pencils come fall semester.

Lisa Sánchez González is the author of Boricua Literature: A Literary History of the Puerto Rican Diaspora. Read her blog here: http://holamisu.blogspot.com/.