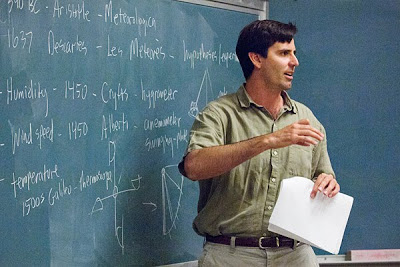 A new study — co-authored by Stanford researcher Mark Z. Jacobson and UC-Davis researcher Mark A. Delucchi — analyzing what is needed to convert the world’s energy supplies to clean and sustainable sources says that it can be done with today’s technology at costs roughly comparable to conventional energy.

If someone told you there was a way you could save 2.5 million to 3 million lives a year and simultaneously halt global warming, reduce air and water pollution and develop secure, reliable energy sources — nearly all with existing technology and at costs comparable with what we spend on energy today — why wouldn’t you do it?

According to a new study coauthored by Stanford researcher Mark Z. Jacobson, we could accomplish all that by converting the world to clean, renewable energy sources and forgoing fossil fuels.

“Based on our findings, there are no technological or economic barriers to converting the entire world to clean, renewable energy sources,” said Jacobson, a professor of civil and environmental engineering. “It is a question of whether we have the societal and political will.”

He and Mark Delucchi, of the University of California-Davis, have written a two-part paper in Energy Policy in which they assess the costs, technology, and material requirements of converting the planet, using a plan they developed.

The world they envision would run largely on electricity. Their plan calls for using wind, water and solar energy to generate power, with wind and solar power contributing 90 percent of the needed energy.

Geothermal and hydroelectric sources would each contribute about 4 percent in their plan (70 percent of the hydroelectric is already in place), with the remaining 2 percent from wave and tidal power.

Vehicles, ships and trains would be powered by electricity and hydrogen fuel cells. Aircraft would run on liquid hydrogen. Homes would be cooled and warmed with electric heaters — no more natural gas or coal — and water would be preheated by the sun.

Commercial processes would be powered by electricity and hydrogen. In all cases, the hydrogen would be produced from electricity. Thus, wind, water, and sun would power the world.

The researchers approached the conversion with the goal that by 2030, all new energy generation would come from wind, water, and solar, and by 2050, all preexisting energy production would be converted as well.

“There are no technological or economic barriers to converting the entire world to clean, renewable energy sources,” said Mark Jacobson, a professor of civil and environmental engineering.

One of the benefits of the plan is that it results in a 30 percent reduction in world energy demand since it involves converting combustion processes to electrical or hydrogen fuel cell processes. Electricity is much more efficient than combustion.

That reduction in the amount of power needed, along with the millions of lives saved by the reduction in air pollution from elimination of fossil fuels, would help keep the costs of the conversion down.

“When you actually account for all the costs to society — including medical costs – of the current fuel structure, the costs of our plan are relatively similar to what we have today,” Jacobson said.

One of the biggest hurdles with wind and solar energy is that both can be highly variable, which has raised doubts about whether either source is reliable enough to provide “base load” energy, the minimum amount of energy that must be available to customers at any given hour of the day.

Jacobson said that the variability can be overcome.

“The most important thing is to combine renewable energy sources into a bundle,” he said. “If you combine them as one commodity and use hydroelectric to fill in gaps, it is a lot easier to match demand.”

Wind and solar are complementary, Jacobson said, as wind often peaks at night and sunlight peaks during the day. Using hydroelectric power to fill in the gaps, as it does in our current infrastructure, allows demand to be precisely met by supply in most cases. Other renewable sources such as geothermal and tidal power can also be used to supplement the power from wind and solar sources.

“One of the most promising methods of insuring that supply matches demand is using long-distance transmission to connect widely dispersed sites,” said Delucchi. Even if conditions are poor for wind or solar energy generation in one area on a given day, a few hundred miles away the winds could be blowing steadily and the sun shining.

“With a system that is 100 percent wind, water and solar, you can’t use normal methods for matching supply and demand. You have to have what people call a supergrid, with long-distance transmission and really good management,” he said.

Another method of meeting demand could entail building a bigger renewable-energy infrastructure to match peak hourly demand and use the off-hours excess electricity to produce hydrogen for the industrial and transportation sectors.

Using pricing to control peak demands, a tool that is used today, would also help.

Jacobson and Delucchi assessed whether their plan might run into problems with the amounts of material needed to build all the turbines, solar collectors and other devices.

They found that even materials such as platinum and the rare earth metals, the most obvious potential supply bottlenecks, are available in sufficient amounts. And recycling could effectively extend the supply.

“For solar cells there are different materials, but there are so many choices that if one becomes short, you can switch,” Jacobson said. “Major materials for wind energy are concrete and steel and there is no shortage of those.”

Jacobson and Delucchi calculated the number of wind turbines needed to implement their plan, as well as the number of solar plants, rooftop photovoltaic cells, geothermal, hydroelectric, tidal. and wave-energy installations.

One of the criticisms of wind power is that wind farms require large amounts of land, due to the spacing required between the windmills to prevent interference of turbulence from one turbine on another.

“Most of the land between wind turbines is available for other uses, such as pasture or farming,” Jacobson said. “The actual footprint required by wind turbines to power half the world’s energy is less than the area of Manhattan.” If half the wind farms were located offshore, a single Manhattan would suffice.

Jacobson said that about 1 percent of the wind turbines required are already in place, and a lesser percentage for solar power.

“This really involves a large scale transformation,” he said. “It would require an effort comparable to the Apollo moon project or constructing the interstate highway system.”

“But it is possible, without even having to go to new technologies,” Jacobson said. “We really need to just decide collectively that this is the direction we want to head as a society.”

[Mark Z. Jacobson is the director of Stanford’s Atmosphere/Energy Program and a senior fellow at Stanford’s Woods Institute for the Environment and the Precourt Institute for Energy. This article was originally published by the Stanford University News on January 26, 2011.]