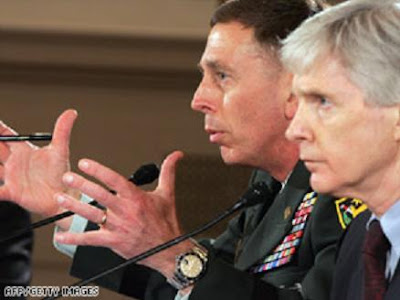 Washington — Maybe it was because I was sitting in the back of the Senate chamber with three war protesters — grim-faced, chanting women dressed in black hooded cloaks, white makeup and blood-red hands — that I felt as though I were watching a production of “Macbeth” rather than a hearing on Iraq.

“Fair is foul, and foul is fair,” the witches in the play said. “Hover through the fog and filthy air.”

Many words hovered Tuesday in the Senate — including some pointed ones by the woman and two men vying to be commander in chief. But the words seemed trapped in a labyrinth leading nowhere.

The Surge Twins were back, but the daylong testimony of David Petraeus and Ryan Crocker before two committees seemed more depressing this time. As the Bard writes in “Macbeth”: “From that spring whence comfort seemed to come, discomfort swells.”

They arrived on the heels of the Maliki debacle in Basra, which made it stunningly clear — after a cease-fire was brokered in Iran — that we’re spending $3 trillion as our own economy goes off a cliff so that Iran can have a dysfunctional little friend.

Not good news, given Ahmadinejad’s announcement that his scientists are putting 6,000 new uranium-enriching centrifuges in place.

I like General Petraeus’s air of restrained competence and Ambassador Crocker’s air of wry world-weariness. But now they seem swallowed up by the fresh violence and ancient tribal antagonisms that they were supposed to be overcoming.

The guardians of Iraq offer more of the same — a post-Surge Pause or “consolidation and evaluation,” as the general generically puts it — and no answers about how we can stop our ward from aligning with our enemy.

The way forward, General Petraeus said, should be “conditions-based.”

Even in a place as prosaic as the Senate, this news spurred existential angst.

Senator Evan Bayh summed up the Dada nature of our plan in Iraq: “We’ll know when we get there, and we don’t know when we’re going to get there.”

Condi is too busy floating trial balloons about being John McCain’s running mate to bother about the fact that she was instrumental in two historic blunders: 9/11 and Iraq.

It’s hard to follow the narrative of our misadventure in Iraq. We went in to help the Shiites that we betrayed in the first Gulf War shake off their Sunni tormentors. But then, predictably for everyone except the chuckleheaded W. and Cheney, the Shiites began tormenting the Sunnis. So we put 90,000 Sunni Sons of Iraq — some of the same ones who were exploding American soldiers — on our payroll so they’d stop shooting at Americans and helping Al Qaeda. Our troops have gone from policing a Sunni-Shiite civil war to policing a Shiite-Shiite power struggle, while Osama bin Laden plots in peace as Al Qaeda in Iraq distracts us and drains our military resources.

Even some senators got confused.

John McCain seemed to repeat his recent confusion over tribes, mistakenly referring to Al Qaeda again as a “sect of Shiites” before correcting himself and saying: “or Sunnis or anybody else.”

And Joe Biden theorized that “The Awakening,” made up of Sunnis, might decide to get into a civil war with Sunnis, presumably meaning Shiites.

But Senator Biden asked a trenchant, if attenuated, question of Mr. Crocker about Al Qaeda: “If you could take it out, you had a choice, the Lord Almighty came down and sat in the middle of the table there and said, ‘Mr. Ambassador, you can eliminate every Al Qaeda source in Afghanistan and Pakistan, or every Al Qaeda personnel in Iraq,’ which would you pick?”

Given the progress beating back Al Qaeda in Iraq, the ambassador replied, he would pick the hiding place of bin Laden.

“That would be a smart choice,” Mr. Biden noted.

Senator John Warner asked the essential question — the one that makes it clear that W. and Cheney hurt the national interest: Is the war making us safer here at home?

General Petraeus avoided answering. But he acknowledged that the “fragile” gains there are “reversible.” “The Champagne bottle,” he told Senator Bayh, “has been pushed to the back of the refrigerator.”

You know you’re in trouble when Barbara Boxer is the voice of reason.

“Why is it,” she asked, “after all we have given — 4,024 American lives, gone; more than half-a-billion dollars spent; all this for the Iraqi people, but it’s the Iranian president who is greeted with kisses and flowers?”

She warmed to: “He got a red-carpet treatment, and we are losing our sons and daughters every single day for the Iraqis to be free. It is irritating is my point.”

Ambassador Crocker dryly assured the senator from California that he believed that Dick Cheney had also gotten kissed on his visit to Iraq.

This entry was posted in RagBlog and tagged Congress, Iraq, Peace Movement. Bookmark the permalink.