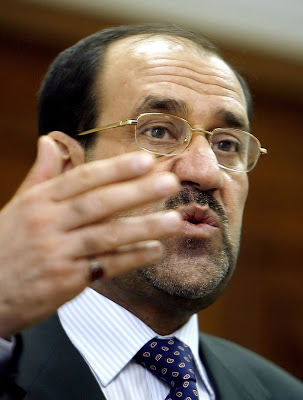 The long-running showdown over the proposed US-Iraq treaty, aimed at legitimizing the American occupation of Iraq, is coming to a head, and it doesn’t look good for the United States.

Prime Minister Nouri al-Maliki tossed a bombshell Monday. In a news conference about the still-secret US-Iraqi talks, which began in March, Maliki for the first time said that the chances of securing the pact are just about nil, and instead he said Iraq will seek a limited, ad hoc renewal of the US authority to remain in Iraq, rather than a broad-based accord.

More important, Maliki and his top security adviser, Mouwaffak al-Rubaie added that Iraq intends to link even a limited accord to a timetable for the withdrawal of US forces. Reports the Sydney Morning Herald:

Iraqi Prime Minister Nuri al-Maliki raised the prospect of setting a timetable for the withdrawal of US troops as part of negotiations over a new security agreement with Washington.

It was the first time the US-backed Shi’ite-led government has floated the idea of a timetable for the removal of American forces from Iraq. The Bush administration has always opposed such a move, saying it would benefit militant groups.

Rubaie strengthened his position today: “There should not be any permanent bases in Iraq unless these bases are under Iraqi control. … We would not accept any memorandum of understanding with (the US) side that has no obvious and specific dates for the foreign troops’ withdrawal from Iraq.”

Here’s the quote from Maliki:

Don’t think for a minute that Maliki, or his Shiite allies, want the US forces to leave. But they are under a lot of pressure. First of all, they are under pressure from Iran, whose regime remains the chief ally of the ruling alliance of Shiites, including Maliki’s Dawa party and the powerful Islamic Supreme Council of Iraq (ISCI), led by Abdel Aziz al-Hakim. Iran’s goal is to neutralize Iraq as a possible threat to Iran, and Iran’s leaders are pressuring Maliki and Hakim to loosen their reliance on the United States. Interestingly, Maliki reportedly told President Bush personally, in a video teleconference on Friday, that the United States cannot use Iraqi territory to attack Iran, and he added that “fomenting tension in the region and pushing for military action against Tehran could wreak havoc on the entire region, including Iraq.”

Maliki is also under pressure from a broad coalition of Iraqi nationalists, from angry, disenfranchised Sunnis to Muqtada al-Sadr’s movement.

But Maliki’s statement is a big deal. At a minimum, it presents an enormous problem for Bush and John McCain, who are arguing for an indefinite US stay in Iraq til “victory,” and who oppose a timetable. True, Maliki seems to be linking his timetable to Iraqi military success, which is not too different from the Bush-McCain formula. But inside Iraq, the pressure is building day by day for a US withdrawal, and Maliki is by no means in control of the process. The fact that both Iran and Sunni nationalists, who are on a collision course, agree that US forces need to leave Iraq, only means that pro- and anti-Iranian factions will settle their differences (either by peaceful diplomacy or by violence) once the United States is gone.

Another factor is that Maliki, who is visiting the United Arab Emirates, is working hard to gain the support of the Sunni-led Arab regimes for his shaky coalition. The UAE and Jordan have both announced that they will be sending ambassadors to Baghdad, and King Abdullah of Jordan will himself make a visit to Baghdad soon, the first by an Arab head of state since the US invasion.

Despite US bungling, it seems increasingly likely that Iran and Saudi Arabia are working behind the scenes to negotiate a Shiite-Sunni accord in Iraq, but both Tehran and Riyadh will want it conditioned on a US withdrawal.