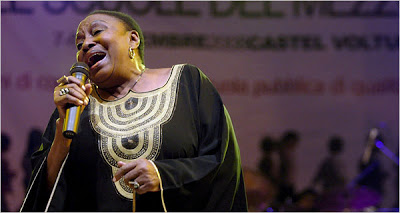 Miriam Makeba performed in a concert on Sunday night in southern Italy shortly before she died early Monday. Photo by Cesare Abbate / European Pressphoto Agency.
Jacob Zuma: ‘Miriam Makeba used her voice, not merely to entertain, but to give a voice to the millions of oppressed South Africans under the yoke of apartheid.’
By Alan Cowell / November 10, 2008

LONDON — Miriam Makeba, a South African singer whose voice stirred hopes of freedom among millions in her own country though her music was formally banned by the apartheid authorities she struggled against, died overnight after performing at a concert in Italy on Sunday. She was 76.

The cause of death was cardiac arrest, according to Vincenza Di Saia, a physician at the private Pineta Grande clinic in Castel Volturno near Naples in southern Italy, where she was brought by ambulance. The time of death was listed in hospital records as midnight, the doctor said.

Ms. Makeba collapsed as she was leaving the stage, the South African authorities said. She had been singing at a concert in support of Roberto Saviano, an author who has received death threats after writing about organized crime.

Widely known as “Mama Africa,” she had been a prominent exiled opponent of apartheid since the South African authorities revoked her passport in 1960 and refused to allow her to return after she traveled abroad. She was prevented from attending her mother’s funeral after touring in the United States.

Although Ms. Makeba had been weakened by osteoarthritis, her death stunned many in South Africa, where she stood as an enduring emblem of the travails of black people under the apartheid system of racial segregation that ended with the release from prison of Nelson Mandela in 1990 and the country’s first fully democratic elections in 1994.

In a statement on Monday, Mr. Mandela said the death “of our beloved Miriam has saddened us and our nation.”

He continued: “Her haunting melodies gave voice to the pain of exile and dislocation which she felt for 31 long years. At the same time, her music inspired a powerful sense of hope in all of us.”

“She was South Africa’s first lady of song and so richly deserved the title of Mama Afrika. She was a mother to our struggle and to the young nation of ours,” Mr. Mandela’s was one of many tributes from South African leaders.

“One of the greatest songstresses of our time has ceased to sing,” Foreign Minister Nkosazana Dlamini-Zuma said in a statement. “Throughout her life, Mama Makeba communicated a positive message to the world about the struggle of the people of South Africa and the certainty of victory over the dark forces of apartheid and colonialism through the art of song.”

For 31 years, Ms. Makeba lived in exile, variously in the United States, France, Guinea and Belgium. South Africa’s state broadcasters banned her music after she spoke out against apartheid at the United Nations. “I never understood why I couldn’t come home,” Ms. Makeba said upon her return at an emotional homecoming in Johannesburg in 1990 as the apartheid system began to crumble, according to The Associated Press. “I never committed any crime.”

Music was a central part of the struggle against apartheid. The South African authorities of the era exercised strict censorship of many forms of expression, while many foreign entertainers discouraged performances in South Africa in an attempt to isolate the white authorities and show their opposition to apartheid.

From exile she acted as a constant reminder of the events in her homeland as the white authorities struggled to contain or pre-empt unrest among the black majority.

Ms. Makeba wrote in 1987: “I kept my culture. I kept the music of my roots. Through my music I became this voice and image of Africa, and the people, without even realizing.”

She was married several times and her husbands included the American black activist Stokely Carmichael, with whom she lived in Guinea, and the jazz trumpeter Hugh Masekela, who also spent many years in exile.

In the United States she became a star, touring with Harry Belafonte in the 1960s and winning a Grammy award with him in 1965. Such was her following and fame that she sang in 1962 at the birthday party of President John F. Kennedy. She also performed with Paul Simon on his Graceland concert in Zimbabwe in 1987.

But she fell afoul of the U.S. music industry because of her marriage to Mr. Carmichael and her decision to live in Guinea.

In one of her last interviews, in May 2008 with the British music critic Robin Denselow, she said she found her concerts in the United States being cancelled. “It was not a ban from the government. It was a cancellation by people who felt I should not be with Stokely because he was a rebel to them. I didn’t care about that. He was somebody I loved, who loved me, and it was my life,” she said.

Ms. Makeba was born in Johannesburg on March 4, 1932, the daughter of a Swazi mother and a father from the Xhosa people who live mainly in the eastern Cape region of South Africa. She became known to South Africans in the Sophiatown district of Johannesburg in the 1950s.

According to Agence France-Presse, she was often short of money and could not afford to buy a coffin when her only daughter died in 1985. She buried her alone, barring a handful of journalists from covering the funeral.

She was particularly renowned for her performances of songs such as what was known as the Click Song — named for a clicking sound in her native tongue — or “Qongoqothwane,” and Pata Pata, meaning Touch Touch in Xhosa. Her style of singing was widely interpreted as a blend of black township rhythms, jazz and folk music.

In a tribute, Jacob Zuma, head of the ruling African National Congress, said the party “dips its banner in tribute to an African heroine, Miriam Zenzile Makeba, a freedom fighter and outstanding African cultural figure.”

“Miriam Makeba used her voice, not merely to entertain, but to give a voice to the millions of oppressed South Africans under the yoke of apartheid,” Mr. Zuma said.