Mancow on Waterboarding : ‘I Would Have Said Anything to Make it Stop’ 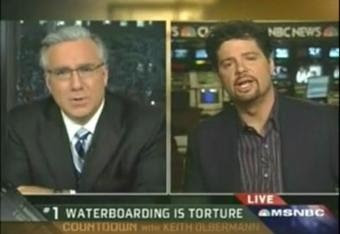 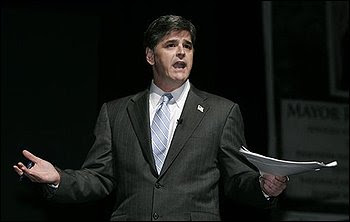 Mancow on Olbermann. Below, waterboard denier Sean Hannity. Photo by Douglas C. Pizac / AP.
Mancow: Hannity called me after I was waterboarded and said, ‘It’s still not Torture’

Last month, Fox News’s Sean Hannity claimed he would agree to be waterboarded “for charity…for the troops’s families.” Since then, multiple pundits have challenged Hannity to undergo the torture tactic, yet he has been unusually silent on the subject of waterboarding since.

Last week, right-wing radio host Erich “Mancow” Muller stepped up to the plate and had himself waterboarded to prove that it isn’t torture. Immediately afterwards, Mancow admitted that it was “absolutely torture” and was “way worse” than he expected.

Yesterday, MSNBC’s Keith Olbermann interviewed Mancow about his experience under the bucket. “I would have said anything to make it stop,” Mancow said, further confirming that torture does not produce reliable intelligence. “I don’t think drowning is harsh enough. … This is worse. This isn’t gulping for air. This is your brain is shut off.” Mancow said that despite the “horrific” event, Hannity called him afterwards to insist that waterboarding still isn’t torture:

MANCOW: First of all, Sean Hannity called me and said, “It’s still not torture.” I said, “Sean” — he is a friend of mine — “it is torture.” All right. But, look, you are giving 10,000 dollars to the Veterans of Valor.org. So I think you are stand-up guy for doing that.

Visit msnbc.com for Breaking News, World News, and News about the Economy

Time and again, those who have dared to undergo waterboarding have said it is torture. Mancow, who initially scoffed at the tactic, explained to Olbermann: “Look, I see the video…the sprinkling of the water, big deal. … I was laughing at it. I was willing to prove and ready to prove that this was a joke. And I was wrong.”

Mancow laughed at waterboarding until he tried it himself. Hannity’s fact-free claim that waterboarding is “not torture” might carry more weight if he displayed the courage of Mancow.

1 Response to Mancow on Waterboarding : ‘I Would Have Said Anything to Make it Stop’