Manzanillo, And Memories of the Merry Prankster 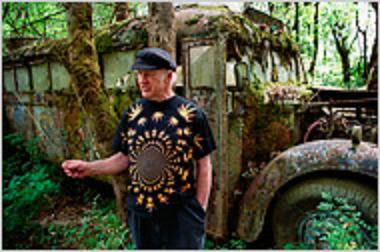 I am in the ocean, doing nothing, just bobbing.

I am facing a golden-sugar beach, a low pink hotel, a thatched palapa baking in the heat. To my left, a long crescent stretch of bay, a cradling arm around a basket of blue. To my right, a stone jetty. Beyond it, a port full of oceangoing tankers and the cliff-hugging city of Manzanillo. Behind me, the limitless Pacific. All around, pelicans loitering in the swells, which lift and gently drop me, my arms out, toes brushing velvet sand.

I said I was doing nothing, but I’m actually trying to summon somebody: Ken Kesey, novelist, psychedelic prophet, leader of the Merry Pranksters, hero of “The Electric Kool-Aid Acid Test.”

It was here, on this beach, that he took to the waves as I did, back in 1966. He was a hunted man then, on the run from the F.B.I. and Mexican federales, but even he, a man of great aplomb, found time for thoughtful bobbing.

“He’s working on his wave theory. This morning for breakfast he brewed and drank enough weed to put a horse in orbit. He’s been out there for three hours with his eyes closed … imagining that he’s a piece of kelp or a jellyfish.”

The observer is Mountain Girl, one of several Merry Pranksters who followed Kesey to Manzanillo. She watches from the beach while pondering his oracular musings.

Manzanillo now is not nearly as metaphysical as that account, from a trippy Kesey volume called “Over the Border,” would suggest. It’s a tourist town, a cruise destination, one gem in the resort strand of Mexico’s Pacific coast, cousin to Acapulco, Ixtapa, Puerto Vallarta. It’s a city of strip malls and cineplexes, dive shops and all-inclusive resorts where the help wears uniforms.

But Manzanillo then was jungle outpost, a nowhere port town on a two-lane road from Guadalajara. It was a place where a gringo — even a famous novelist gringo accompanied by family and friends, an abundant supply of drugs and an International Harvester school bus covered in Day-Glo paint and blaring music from a sophisticated loudspeaker system — could reasonably expect to hide out for a while.

You probably know most of the back story. Kesey is a promising writer at Stanford, publishes “One Flew Over the Cuckoo’s Nest,” his first novel, in 1962, and a huge deal is made of it. A circle forms in Palo Alto, bound by Kesey’s charisma and brightened by psychoactive chemicals and Day-Glo paint. It moves to the woods of La Honda, Calif., and roams the country in an old school bus. Kesey and the Merry Pranksters stage a journey into life, art, rock-and-roll and experimental drug use that attracts hangers-on, Hell’s Angels, Tom Wolfe and, inevitably, cops.

Kesey is busted for marijuana possession once, twice. Now he faces real time: a bad trip he does not want to take. He parks a truck on a coastal bluff, writes a fake suicide note — Ocean, Ocean, I’ll beat you in the end — then slips into Mexico in a car trunk.

He hides in Puerto Vallarta, then Mazatlán, has B-movie escapes from undercover agents, and ends up in dead-end Manzanillo.

There the circle reconnects. Kesey is joined by his wife, Faye, their young children and a squad of Pranksters, including Mountain Girl, a k a Carolyn Adams; Ken Babbs; Mike Hagen; Gretchen Fetchin the Slime Queen; and the Beat legend Neal Cassady, with his parrot, Rubiaco.

Kesey and family and Mountain Girl take a little rented house on the beach. The others hang their hammocks across the road, in an abandoned pet-food factory they called La Casa Purina.

The sun pours off the mountains. The Pranksters soak in it, melting in heat so thick they call it Manzanillo mucus. They swim, they fish, they do laundry, they get stoned. They wait for family and lawyers to wire money. Mountain Girl gives birth to Sunshine, her daughter with Kesey, in the charity ward at the Hospital Civil.

The idyll lasted only into the fall. Kesey went home, did his five months in jail, and got right back to being an author and counterculture icon. His was a well-lived, well-loved, well-documented life, and it ended in rural Oregon in 2001.

I flew into Mexico at the end of August, a late arrival to the Kesey fan club, looking to unearth whatever traces remained of the Manzanillo episode.

I brought my 20-year-old stepson, Zak, who came well qualified because of his skill with a camera and fondness for the Grateful Dead, the Pranksters’ house band. I brought my battered undergraduate copy of “The Electric Kool-Aid Acid Test” and “Mexico on 5 Dollars a Day,” the 1963-64 edition, which reported that Manzanillo’s “prettiest senorita” could be found, along with aspirin and diarrhea treatments, behind the counter of the Farmacia America on Avenida Mexico. I also brought a Hermes 3000 portable typewriter, at which I planned to sit and write in the heat and moonlight, with cold, sweaty beers.

I’m sorry, reader. I did not become a wave and did not find many physical traces of the Kesey interlude, though I came close, much closer than I thought I would.

You can, too, if you go as the Pranksters did, poor and open-minded, and look in the right places. Spend as little money as possible and stick to the far, far southern end of Manzanillo Bay, away from the high-end resorts and close to the jetty and pelicans.

Before I left New York, I had lucked upon Bart Varelmann, who had owned the little Hotel La Posada, one of Manzanillo’s only hotels back then. It’s still there, steps from the beach and that jetty, which borders a channel leading into Mexico’s biggest Pacific port.

Mr. Varelmann told me that the Pranksters had spent the summer next to his hotel, parking their bus beside a huge rock. Mr. Varelmann is now retired to Florida. He said he couldn’t remember Kesey very well, but he remembered the Pranksters and their kids, and the bus.

“The interior of Ken’s bus was a grab-bag cornucopia of strange pills, exotic herbs, magic mushrooms, peyote buttons, LSD, uppers, downers, poppers and of course marijuana,” Mr. Varelmann writes in his self-published memoir, “Innkeeper.” “On a windless day one could get stoned just strolling past the bus. A battery-powered tape machine enhanced the scene with a dreamy, pre-rock music by the likes of Mile Davis, Stan Kenton and the Modern Jazz Quartet.

We hung a lot at Ken’s magical bus that summer.”

There’s a problem with Mr. Varelmann’s tantalizing story. He insists that it all happened in 1963, which is impossible. Still, factoring in the memory-glazing effects of time and heavy drug use, it was the best lead I had, so I booked a room at La Posada for a week.

The first night, Zak and I walked through downtown Manzanillo, still bustling near midnight. Sidewalk food stands glowed under bare bulbs; it was a carnival of grease, of chorizo and chilies, roasted corn ears and ice pops. Looking up in the narrow streets, I saw thousands of swallows nestled for the night on telephone lines, evenly spaced, like zipper teeth. We had a late dinner, bistek tacos and pulpo gallego, octopus in olive oil and garlic, soft like butter.

The next morning, Zak sleeping, I slipped onto the beach to await the sunrise. The windy tumult of the day before was gone; it was still but not dark. Klieg lights from hotels cast a prison-camp glare, and development all along the bay cast a pallid wash of light into the sky. The most distant lights shimmered in the heat. The stifling, hushed air, the sand and thumping waves all seemed to be waiting for the sun to rise to ignite the conflagration of another stifling Manzanillo day.

MY other source of Kesey memories was Robert Stone, the novelist, who had been there.

Although he listened kindly when I called, he could not answer all my questions about addresses and landmarks. He confessed that it had been 40 years ago, and he too had been stoned a lot of the time. The buildings were already ruins in ’66, he said. “We weren’t much into infrastructure.”

Read all of it here.
Slideshow, narrated by author, with Kesey photos and audio.

2 Responses to Manzanillo, And Memories of the Merry Prankster