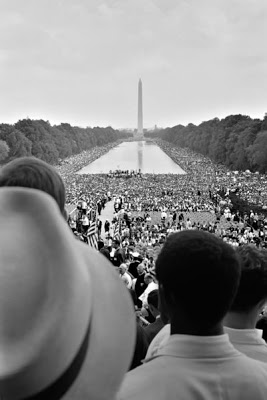 What a difference money makes. On Saturday, the 28th of August, 2010, Glenn Beck rallied on the steps of the Lincoln Memorial with all the majesty of Fox News behind him.

Day after day Fox News had trumpeted the event, organizing for it, and if Beck hadn’t gotten a crowd it would have been no fault of those who own Fox News and fund Glenn Beck. (Fox News is one very good reason for an estate tax that would guarantee that no one could buy and own networks, newspapers, and control the media, the way Rupert Murdoch has done.)

I’ve never met Glenn Beck, I don’t expect to. He is — pretty much in common with all the commentators, whether their views are left or right — paid to air his views. I suspect that for the right price Beck would happily change those views.

(I do agree with Beck’s attacks on Woodrow Wilson, who brought segregation back to the White House, got us involved in the bloody First World War, and who jailed the Socialist Party’s leader, Eugene V. Debs, for the crime of speaking out against that war. Irony of ironies, Wilson refused to even consider a pardon for Debs — that remained for the Republican President, Warren G. Harding, who met with Debs in the White House and pardoned him.)

Let me, as someone who has had the good luck to be a guest at history’s table, turn back more than half a century to Wednesday, August 28th, 1963, and the March on Washington for Jobs and Freedom. I was then, at 33, a young radical working for the War Resisters League, which had given Bayard Rustin leave so that he could work in the Civil Rights movement as a special aide to Martin Luther King Jr., and as the primary organizer of the August 28th events. 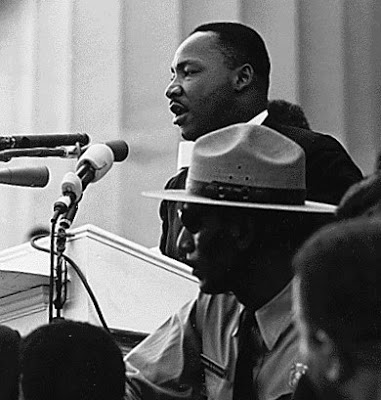 Dr. Martin Luther King, Jr., gives his “I Have a Dream” speech during the March on Washington, August 28, 1963. Photo from Wikimedia Commons.
The media gave the event good coverage after it happened — Life Magazine (who can remember the days when Life Magazine, a weekly, was a major cultural force?) put Bayard Rustin and A. Philip Randolph on its cover. But there was no advance coverage, no daily drumbeat on the networks. No commentator who could act as the organizer for it.

Nor did it take place on Saturday — Bayard knew it had to take place in the middle of the week, when people would need to take time off from their jobs. The event was far more than a weekend outing in the nation’s capitol — it was the largest demonstration of its kind in our history.

Much of the background feeling can be seen in the film about Bayard, Brother Outsider, which gives one a sense of how the demonstration was organized with the support of trade unions, church groups, and the civil rights movement in the South.

There was profound fear in Washington DC. John F. Kennedy had tried to get the march called off. The police were put on special alert. The shops of the city were largely closed, the streets empty, as “White Washington” braced for the flood of Blacks and the inevitable rioting.

Bayard had enlisted the support of the Guardians, the Black police officers in New York City, who came down in force to provide security.

I don’t remember how I got there — I assume I was one of the many thousands of New Yorkers who took buses down. But I shall never forget our march toward the Lincoln Memorial, as thousands and thousands of citizens, most of them black, but many of us white, chanted “Freedom, Freedom, Freedom” with a cadence all its own. Blacks from the South who had never been in a mass demonstration with whites before. All pouring into the area around the Lincoln Memorial.

I had been to Washington many times before (and have been many times since). I had been to the “Prayer Pilgrimages” Bayard had organized, which were a kind of prelude to the great march. I was used to the endless list of speakers at these events, a speaker from each of the sponsoring groups.

Usually, after getting to a march, and making sure I’d be one of those counted by the counters, I’d take a break for a hamburger or a drink. This time I was grateful that I stayed and heard King’s “I Have a Dream” speech, breaking out over the vast assemblage. To compare the majesty of that rolling speech, with the cadence of the Black church and the infinite suffering of Black America, with the commercial hysteria of Glenn Beck is, almost, to make one ashamed of being white.

There was a scene that unfolded before King spoke, as the crowd moved into place. George Lincoln Rockwell, the American Nazi leader (who was later assassinated by one of his followers) had set up a small stand from which to speak, and began to spew hatred of “niggers, kikes, queers, and commies.”

I admired Rockwell for his courage, but he was clearly intending to spark a riot. I watched with fascination as young Black men moved in, formed a ring around Rockwell and his supporters, and locking arms, faced outward, toward any of the marchers who might be tempted to make a physical assault on Rockwell. Rockwell and his cohorts found themselves isolated — and protected — by a ring of young Black men. 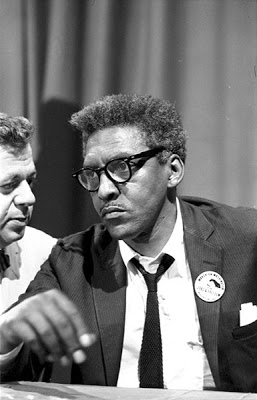 Organizer Bayard Rustin at news briefing, August 27, 1963, before March on Washington. Photo by Warren K. Leffler / U.S. News & World Report / Wikimedia Commons.
There was no violence in Washington that day. It was a proud moment for the Civil Rights movement, though terrible things were to come — on September 16th, racists bombed a black church in Birmingham, murdering four children. And in November of that year JFK was murdered.

August 28th was a moment of affirmation for the best in America, black and white, young and old. It did not end the struggle for civil rights for Black America — but it was a crucial point in that struggle.

I wonder if those who follow Glenn Beck so avidly will, 10 years from now, look back to this day, this media-organized event on a Saturday when no one had to take off from work, an event funded by the multimillioniares who stand in the shadows behind Beck, and feel they were part of history, in the way those of us who were there in Washington D.C. in 1963 knew we were on the side of the best America had to offer.

[David McReynolds is retired, the former chair of War Resisters International, and the Socialist Party presidential candidate in 1980 and 2000. He lives on the Lower East Side of New York with two cats. He can be reached at dmcreynolds@nyc.rr.com.]