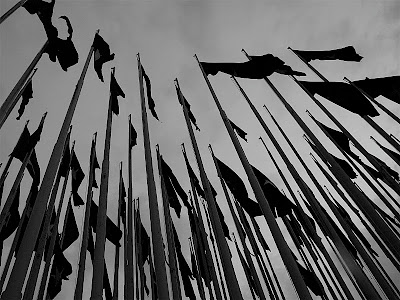 Cuba marked the thirty-fourth anniversary of the bombing of Cubana Flight 455 on Wednesday with a call for the U.S. to extradite the key suspect. Seventy-three people were killed in the October 6, 1976 attack, which was the first and only mid-air bombing of a civilian airliner in the Western Hemisphere. Speaking before relatives of the victims, Cuban President Raúl Castro called on the Obama administration to extradite the anti-Castro Cuban exile and CIA operative Luis Posada Carriles.
[….]
Castro also called for the release of the Cuban Five, who are serving lengthy sentences in the U.S. for trying to monitor violent right-wing Cuban exile groups responsible for attacks inside Cuba.

For the victims and my friends, you all know who you are.

September 11th is a date that marks so many things for the history of this hemisphere that it’s almost scary. In 1973, President Salvador Allende was ousted and murdered during a coup d´état that left Chile under a fascist military regime that lasted for 17 years.

In 1980 a Cuban diplomat was assassinated in the streets of Manhattan on his way to lunch in Queens. In 2001, two towers fell hauntingly in what is now known as the worst terrorist attack in the history of the Americas and the reason why 911 has become more than a phone code.

All of these make 9/11 a date to remember, but there is an antecedent to this date that marks, unfortunately, a lesser known but horrifying occurrence.

October 6th marks the 34th anniversary of the first terrorist attack against a civilian aircraft in the Western Hemisphere: Cubana Flight 455. On that day, in 1976, a flight took off from Bridgetown, Barbados, on route to Jamaica and towards its final destination, Havana. Less than nine minutes after takeoff, two on-board explosions blew the aircraft out of the skies and into the deep warm waters off the island’s coast.

All 73 passengers were killed. The Cuban Olympic fencing team was on board, all of them proudly boasting their gold medals from the meet in Venezuela that previous week. The ages of the athletes ranged from 17 to 23. There was a Cuban crew that left behind wives, husbands, children, and parents to mourn their senseless death.

The horror inspired then President Fidel Castro to give one of his most dramatic and moving speeches which ended with a pronouncement that rings on today: “When an energetic and virile people weep, humanity trembles!”

The culprits of the attack were quickly found and sentenced to prison terms. Two of the men served less than the 20-year sentences they received. One was absolved and later pardoned by President Bush Sr., and the last, possibly the most infamous and dangerous and cruel of them all, is basking today in the lovely Florida sunshine awaiting some sort of trial for illegal entry into the United States: a bogus charge imposed on him when he was caught after escaping from Latin America where he is still wanted.

The name of this fellow may not mean much to most readers, but for many in Cuba and in the rest of Latin America the name Luis Posada Carriles rings out the same as Osama Bin Laden in New York City.

This was not the first act of terror against the Cuban nation after its social revolution of 1959. This was merely the most notorious on an international scale. It is because of this that Cuba has had to spend countless hours and dollars to protect its countrymen. It is because of this that five men are unjustly imprisoned in the United States today, because they tried to stop more of such acts. 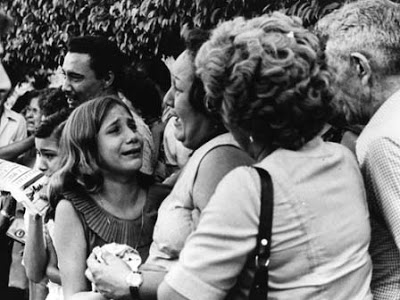 Grieving relatives of those killed on Cubana flight 455. Image from Barista.
Terrorism is a heinous crime wherever it happens. There is no excuse for the untimely deaths of the innocent, and being “at war” with a government — as Orlando Bosch, the pardoned culprit, has used so many times as justification — is the lamest of excuses.

Whether it happens in the Middle East, from suicide bombs or state-sponsored terrorist attacks against civilians; whether it is ETA in Spain, or the IRA in Ireland, or on the streets of Puerto Rico, or in places of business in Miami; whether it is a shameful act on an early morning in Manhattan or the first one over the crystal blue waters of the Caribbean Sea: terrorism has no excuse and is an act of cowardice.

Seventy-three died 34 years ago this October 6th. How many more before we can make things different? 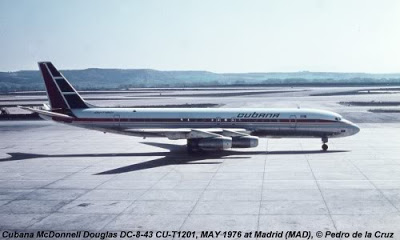