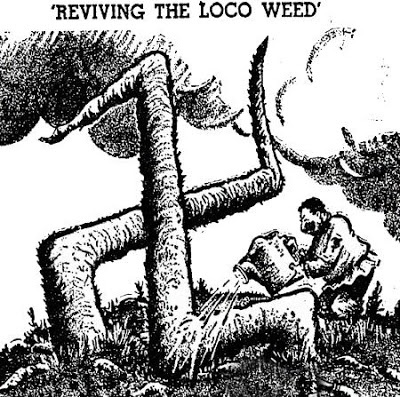 Sinister Drug War Propagandists will stoop to any low level as evident in this World War 2 Era Political Cartoon from the Buffalo Courier-Express equating Marijuana with Nazism. From Daily Kos.

Mariann Wizard posted the following as a comment appended to an article published last week on The Rag Blog, about the number of people now in our criminal justice system having reached a record total of over 7.2 million.

I believe this to be a critically important issue facing our society today, and Mariann speaks to it with intelligence and feeling.

On Prohibition and Propaganda
By Mariann Wizard / The Rag Blog / June 17, 2008

I have worked to end the drug war for over 40 years and it is not politicians who will turn it around.

Every politician I have ever talked with PERSONALLY about the issue has told me that they PRIVATELY agree with me, but that THEIR CONSTITUENTS would have their heads on a pike if they were to support any reduction in drug war expenditures or penalties.

In Alaska in 2004, we saw local elected officials who were known to smoke pot — virtually everyone in AK has at least TRIED it by now, since their Supreme Court consistently rules in favor of AK’s more libertarian Constitution — coming out in public with the “Drug Czar” to denounce Proposition 2, which would have legalized, taxed and regulated cannabis commerce. THEY were bullied into this flat-out public hypocrisy and lying by threats to cut federal funding to Alaska, which is fed, more than any other state, at the federal teat.

Alcohol Prohibition, to which today’s drug prohibitions are often compared, has some fundamental similarities, and some even deeper, imho, fundamental differences. Chief among the latter is the length of duration. Alcohol Prohibition survived in these United States for less than a dozen years; Cannabis prohibition began (in El Paso, Texas)in 1914, going federal in 1937. THAT IS SEVENTY-ONE YEARS OF LIES, DECEIT, HYPOCRISY, FALSE TESTIMONY, FALSE “SCIENTIFIC EVIDENCE,” GRAFT, CORRUPTION, GREED, and every other SOCIAL POISON imaginable, and people have become simply inured to it. Those of us who know the government lies about pot knows it lies about everything else as well. Those who don’t get it by now, ain’t ever gonna get it.

Even taking Mary Jane out of the equation and simply looking at the “hard” drugs, mostly characterized by their white or brown powder one-chemical formulation, and certainly not excepting the very many prescription drugs whose legal use can awaken illegal cravings in those susceptible, this is not a “problem” which should have any significance whatsoever to the criminal justice system. We don’t lock up tobacco addicts. We don’t lock up alcoholics, unless they drink and drive or commit some actual crime, and even then, we almost always offer the choice of rehab and restitution to first offenders.

If you wonder why marijuana is illegal, read Jack Herer’s seminal “The Emperor Wears No Clothes”, available at any Planet K store in Austin and through lots of web sources, I’m sure. HINT: It has to do with “marijuana’s” alter ego, HEMP, the most valuable and versatile agricultural crop known to humanity over thousands of years, and today marginalized and virtually eliminated due to a MASSIVE (and successful!) RESTRAINT-OF-TRADE CONSPIRACY led by such all-Americsn stalwarts as William Randolph HEARST, DuPONT, Southern COTTON FARMERS, the brand-new PHARMACEUTICAL industry, and ALCOHOL & TOBACCO interests.

A LOT OF MY FRIENDS AND POLITICAL ASSOCIATES APPARENTLY THINK I “JUST LIKE TO GET HIGH” — WHICH I DO!!! — AND THAT THEREFORE THE REST OF THIS IS SOME MEANINGLESS FANTASY PIPEDREAM. Just goes to show how vulnerable THEY are to a 71-year WAR of PROPAGANDA.

We have allowed ourselves to be cheated of one of the greatest gifts of the universe, however you conceive of that, through terror and trivialization. And one in every 100 Americans (MANY OF THEM OUR TRUE BROTHERS & SISTERS) went to jail or prison in 2006.

PS — When they get out, they tend to think they can’t vote anymore. They don’t register to vote, and therefore aren’t on the jury rolls.