We Need a Second American Revolution 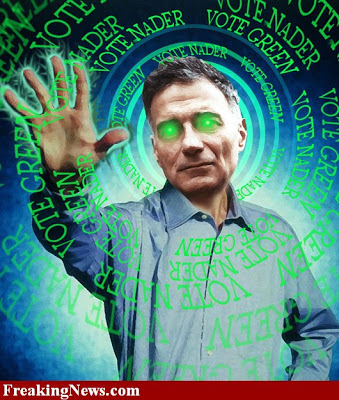 This is only in part a response to the comments made on yesterday’s post about a recent Nader speech. The bigger picture for me is that we do desperately need election reform in the US to change this jaundiced process. Joel Hirschhorn has some of the best ideas going in that respect, as he outlines in his book Delusional Democracy. If we are to have meaningful change for the better, we need to keep the discussion moving forward.

In so many ways Ralph Nader deserves to be president of the U.S. more than any Republican or Democratic candidate. For anyone that understands the need to overturn the two-party plutocracy and the corporate money that supports both major parties, Nader is the only credible candidate. He is also the most honest one and the only one that has the best interests of ordinary Americans as his highest priority. Yet most of the millions of independents and progressives that are disillusioned with the two major parties will probably not vote for him in November. Here is the case why the two most prevalent reasons they will use are without merit.

First, there is the classic view that Nader cannot win and therefore that voting for him is just a wasted vote. On this point the wisdom of I.F. Stone has kept me committed to always voting for Nader:

The only kinds of fights worth fighting are those you are going to lose, because somebody has to fight them and lose and lose and lose until someday, somebody who believes as you do wins. In order for somebody to win an important, major fight 100 years hence, a lot of other people have got to be willing — for the sheer fun and joy of it — to go right ahead and fight, knowing you’re going to lose. You mustn’t feel like a martyr. You’ve got to enjoy it.

In other words, when voting for an independent like Nader it is psychologically necessary to consciously accept the fact that the fight is not about electing Nader president. We need a long view of history and revolution. No, a vote for Nader is a most effective way to participate in the corrupt political system by expressing utter disdain for the two-party plutocracy. A vote for Nader is all about overthrowing the power structure that is killing the middle class and fostering rising economic inequality. The misplaced zeal for candidates like Ron Paul, Hillary Clinton, and Barack Obama is based on a short-term embrace of a particular candidate, rather than devotion to the battle to destroy the two-party plutocracy. When Nader runs and loses we the people are not losing, we are stubbornly still fighting for what must ultimately be victorious — restoration of American democracy by overturning the two-party plutocracy.

Specific policy positions are largely distractions from what should be seen as the central battle to restore American democracy. But even when it comes to specific policy positions it is amazing that so many change-driven Americans will not fully understand how Nader’s positions on major issues are so much better than those of Obama, Clinton, and McCain. On the health care issue alone, only Nader supports what every American should embrace: a single payer insurance system. This is the only position that can remove the obscene profit-loving power of the insurance and pharmaceutical industries. That every Democratic and Republican candidate refuses to embrace the single payer system is proof positive of their commitment to keep corporate money and power happy, because that sustains the two-party status quo.

Second, there is a persistent view among voters unenthusiastic about the two-party system that Nader is a spoiler and that voting for him imposes guilt for electing a terrible president. Should you have any negative thoughts about Nader because of the 2000 election, the facts refute blaming him for the Bush victory, including more than 200,000 registered Democrats in Florida who voted for Bush (compared to 97,000 votes for Nader, only 25 percent of which would have voted for Gore) and over half of the registered Democrats that did not vote at all because Gore ran a terrible campaign.

It is simply illogical and moronic to blame Nader and the people who voted for him. This year, Democrats will undoubtedly work hard to create a guilt atmosphere so that people who might be inclined to vote for Nader are made to fear that doing so could elect McCain president.

The people who should bear primary responsibility for electing McCain president are those who vote for him. And possibly those who truly believe that Obama should be president but do not vote at all. But millions of Americans that see Obama mostly as the lesser evil candidate should vote for Nader. They must trust their instincts and knowledge that Obama is simply another two-party plutocracy candidate that used slick rhetoric to con the public. Making Obama president is not winning the battle against the two-party and corporatist tyranny.

If Obama had any shred of true democracy-decency he would be advocating for allowing third party and independent candidates to participate in the televised presidential debates. But nothing about Obama and his positions has anything to do with restoring American democracy. If he truly wanted to get corporate and other special interest money out of politics he would also support a constitutional amendment that replaced all private money in campaigns with total public financing. If he truly wanted to deliver universal health care he would be supporting a single payer system. And on and on.

I see Nader as the only candidate who has key characteristics of our Founders, because he is the only one willing to explicitly fight domestic tyranny and the only one that understands we need a Second American Revolution.

Indeed, this is what he recently said: “We need a Jeffersonian revolution. If it doesn’t happen, our democracy will continue to weaken and things will get worse. Right now, we have a two-party electoral dictatorship with each party looking for the highest corporate bidder.” Amen.

Work for Nader, contribute to his campaign and vote for him. And enjoy the fight.

This entry was posted in RagBlog and tagged Presidential Campaign, Propaganda. Bookmark the permalink.

1 Response to We Need a Second American Revolution