Mariann Wizard Vasquez :
Out There: My first dispatch from Belize

I’m starting to get a glimmer of the ‘colonial fatalism’ that decrees, ‘That’s just how things are.’ 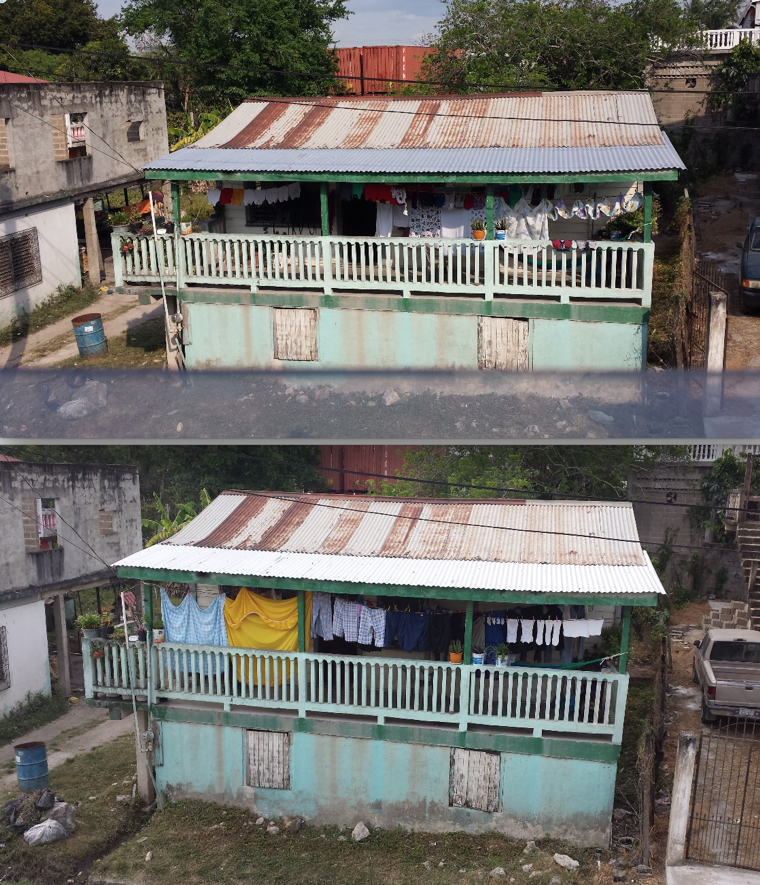 SAN IGNACIO TOWN, Cayo, Belize, C.A. — It’s the smallest things that begin to impress upon my First World consciousness just what it is to live in the Third World. Take, for example, the lowly clothespin.

In Belize, where sunshine is one of the most abundant (and least exploited) resources, everyone hangs their clothes and household linens out to dry. Porches, verandas, patios, and yards of rich and poor alike ripple with sheets and towels, the mister’s briefs and the missus’ dainties, school uniforms and superhero T-shirts, constantly-changing prayer flags of devout cleanliness. Except during the rainy season, the system works fine.

The system depends, quite literally, upon
lines and the pulleys.

The system depends, quite literally, upon lines and the pulleys, bolts, hooks, and/or other hardware that secures said lines to houses, trees, fences, and whatever else is handy and high enough off the ground to hang wet stuff. The system also requires, for each piece of laundry, one or more clothespins or pegs.

Clothespins of two types are locally available: plastic and wooden. Both are made in China and sold at the ubiquitous “Chinese stores” that are the great majority of Belize’s neighborhood convenience, grocery, and housewares retailers. However, don’t let the word “Chinese” confuse you; the shops are operated by Taiwanese/Formosan (Republic of China, ROC) immigrants, industrious, clannish, and usually referred to as either “Chiney,” “China Boy,” or “China Girl” by locals of other descent. While they sell many items made in the People’s Republic of China (“China,” PRC), for whatever reason, if you think the imported Chinese goods at Wal-Mart are shoddy and/or weirdly inadequate, you ain’t seen nothin’ yet.

(I once bought a cool-looking, Chinese-made paper towel rack at Wal-Mart that illustrates the “weirdly inadequate” category well. When unwrapped, it was revealed that complete disassembly with a Phillips screwdriver was required to put in a new roll of towels. The Wal-Mart Customer Service lady and I had a good laugh over it! There are no CS people in Belize. People called that are really sales representatives.)

Here, it’s the plastic dishdrainers. To me, the operative part of that noun is “drain“; that is, a receptacle that allows wet dishes to DRAIN excess water, preferably down the DRAIN, via a cut-out DRAINAGE channel, if you get my “‘drift.” Even in my U.S. childhood of the last century I cannot recall a time when such items were not basic kitchen equipment. Rubbermaid comes to mind; more recently, Sterilite, and there must be many more brands, produce functional dishdrainers.

Here, available dishdrainers do not have a drainage channel and hence do not drain.

Here, available dishdrainers do not have a drainage channel and hence do not drain; water stands in the tray of the abject object and promptly begins to fester, requiring regular dousing with bleach and vigorous scrubbing to be unrepulsive. (Don’t feel too superior, Yankee, IKEA sells a similar one that also doesn’t drain.)

But back to clothespins. My husband is in charge of our laundry, a responsibility he takes quite seriously. When we set up a clothesline at our “honeymoon cottage” last fall, he chose plastic pegs; we bought 90. 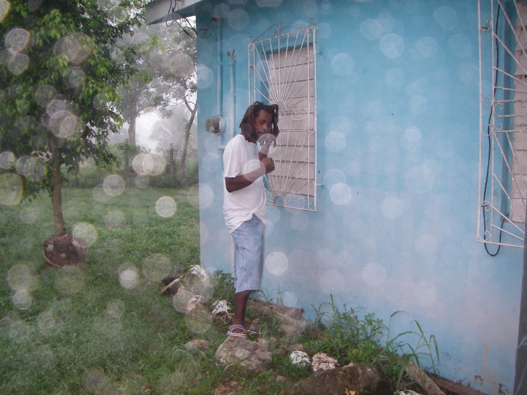 The honeymoon cottage, with its heart-shaped grilles, on Venus Street.

Six months later maybe 30 are left. The damnable things break if you look at them crossways; shatter if they drop onto the cement deck; fall apart if god-forbid our six-year-old nephew who lives with us part-time crashes his Ninja Turtle toy into one. (His room doubles as indoor washline, since our deck is about 20 ft. sq. and we currently have no yard.)

Last week, in view of Husband’s impending hernia surgery, I bought a pack of wooden clothespins as a jokey “get well quick” gift.

Today, two days after surgery, he washed three loads and hung two. As a concession to convalescence, he consented for the first time to use the right-hand side of our washing machine, a gizmo rather like a salad spinner that takes the place of wringing each piece of washing by hand.

After he finished and had gone back to bed, I saw the wooden pegs unopened on the kitchen counter and decided to use them to hang the third and smallest load.

Of a pack of 24, four went straight into the trash (where I have to pick ’em out now to take a picture). Here they are; well, actually I threw the first and worst over the deck railing; I’ve added a broken plastic one in its place: 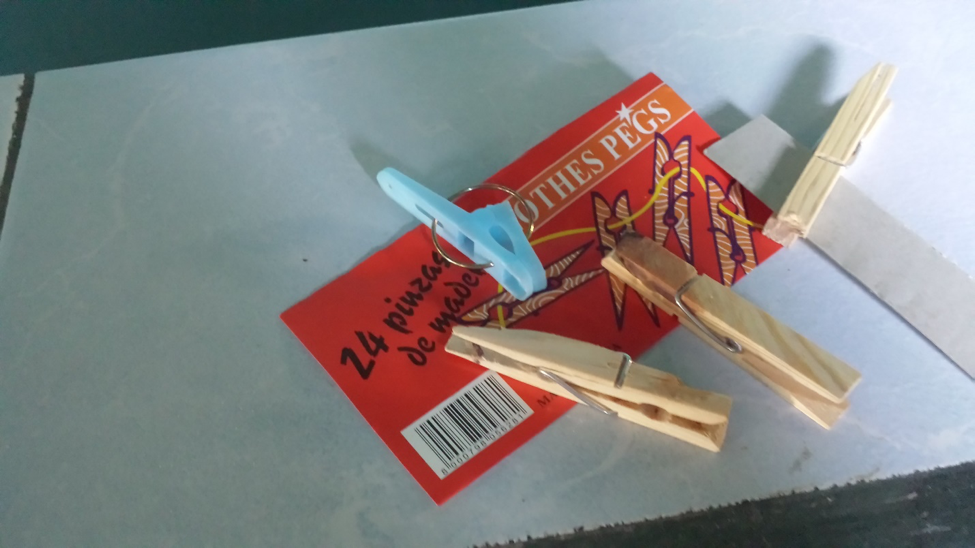 No-goodnik clothespins of both sorts.

Two more wooden pegs and another plastic one broke as I was hanging that little bit of washing. So the point for today may be that defective products being sluffed off on poorer nations is a common practice and commonly known, but not maybe really understood until you must choose between bad options to do something you’ve taken for granted all your life.

Don’t think I didn’t think about this before, during, and now after my husband’s surgery. Medical supplies and techniques, too, are often less-than-fresh by the time they reach these shores, by whatever means. A friend in Austin and her husband told me about his laser hernia repair; my honey has a groin-full of what look like sailmaker’s stitches over surgical mesh implants.

Keep in mind that Belize is extremely
Westernized and States-centric.

Keep in mind that Belize is extremely Westernized and States-centric in many ways; there are probably more native-born Belizeans living in the U.S. than in Belize, at least part-time. A constant traffic of goods and technologies flows southward, many no doubt purchased at Wal-Mart. Yet I find myself wondering why this wood-producing nation imports wooden products of any kind. And why the expensive private hospital we used couldn’t provide a “lee bar” of soap for him to use before being released. And that if I’d only fallen for some guy living in a refrigerator box atop a trash heap in Ethiopia, I wouldn’t give a rat’s ass about clothespins or surgical techniques.

I’m starting to get a glimmer, maybe, of the “colonial fatalism” that decrees, “That’s just how things are,” because they always have been, and it would take more than a lifetime, maybe, to change them.

However, Husband’s surgeon has an excellent reputation and had at least part of his medical training in Cuba. If there’s anywhere people know how to make the best of the leavings of modernity, well, that’s it.

One thing I didn’t do before Rastaman’s surgery was read all about it on WebMD or any other Internet site, although I am finally, intermittently, online. Potential complications? Risks? U.S. standard of care? Mexican and/or Guatemalan surgeons? Cost comparisons?? All totally irrelevant to us in the here and now. You do what you have to do, and you pray it comes out fine.

You do what you have to do, and you
pray it comes out fine.

There’s another side of that, of course, a side that appeals to me, a side that says, “Wach mi!” — a Criolle expression akin to Texans’ “Hey, lookee whut I can do!” (An old joke says the latter is a common tombstone inscription, but I’ve never actually seen it.)

Anyway, what change have any of us seen that might be permanent? Racism, sexism, warmongering and exploitation continue, as do egalitarianism, peace-making, and humanism. When has impermanence ever stopped us? You do what moves you to act and pray it comes out fine.

So now I’m doing my little bit to bring consumer equality to Belize, though not yet with clothespins, having just become aware of the extent of that mess! Nope, I’m peddling Tiger Balm® at a friend’s book and gift shop. We figure there ought to be a market among the many adventure tourists who sometimes get banged up climbing around nearby Mayan ruins or canoeing local rivers.

When I came to Belize I thought I’d be able to find the popular muscle salve, versions of which are now made not only in the PRC but ROC and several other Asian nations, at the Chinese stores, right? They sell many common over-the-counter medicaments from the US and other countries. Alka-Seltzer®. NyQuil®. But not Tiger Balm. Wherever I asked for it I was met with unusually gruff  “no-we-no-haves.”

I finally demanded of a young woman shopkeeper, “You know what I’m talking about, don’t you?”

“Yes,” she replied rather sheepishly. “We all use it. But we no sell it.”

The relationship between Belize and the ROC is long, complicated, and still quite murky to me. However, currently facing aggressive border claims from neighboring Guatemala, when Belize asked several friendly nations for help in acquiring helicopters for border surveillance and interdiction, only Taiwan responded by giving a fully functional troopship and the training and supplies for it. (Another helicopter seems to have been donated by anonymous importers of something; abandoned on a secluded airstrip, according to news reports, it’s been drafted.)

Meantime there are manifestations in the heavens, fiery angels, trumpets, a change that’s gonna come, as it always has until now… 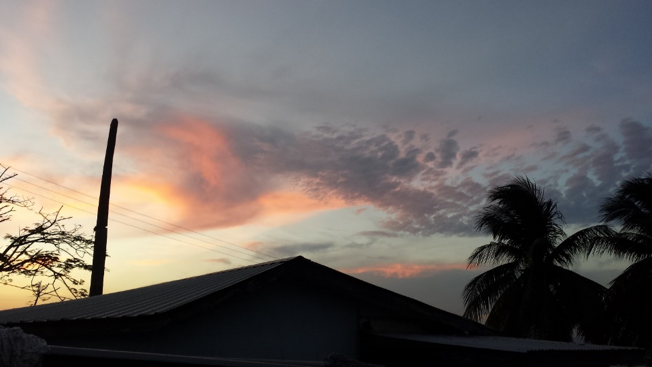 *[The former Mariann Garner-Wizard, one of the originators of The Rag‘s print version and an early contributor to/supporter of The Rag Blog, Mariann Wizard Vasquez has “abandoned Babylon for the considerable charms of a dreadlock Rastaman” and is in the process of going Native, while stubbornly maintaining her Wizardly ways. Look for more observations from “Out There” as the “Late Boomer’s” latest transformation unfolds. All of Mariann’s websites are way out of date but still chock-full of cool stuff: www.WordsWorth.biz, www.AWizardsLife.com, www.CannabisResoource.com.]

15 Responses to Mariann Wizard Vasquez :
Out There: My first dispatch from Belize