As civil wars go, this one is especially unforgiving and brutal, made worse by bitter historic ethnic, religious, and tribal rivalries and proxy wars. 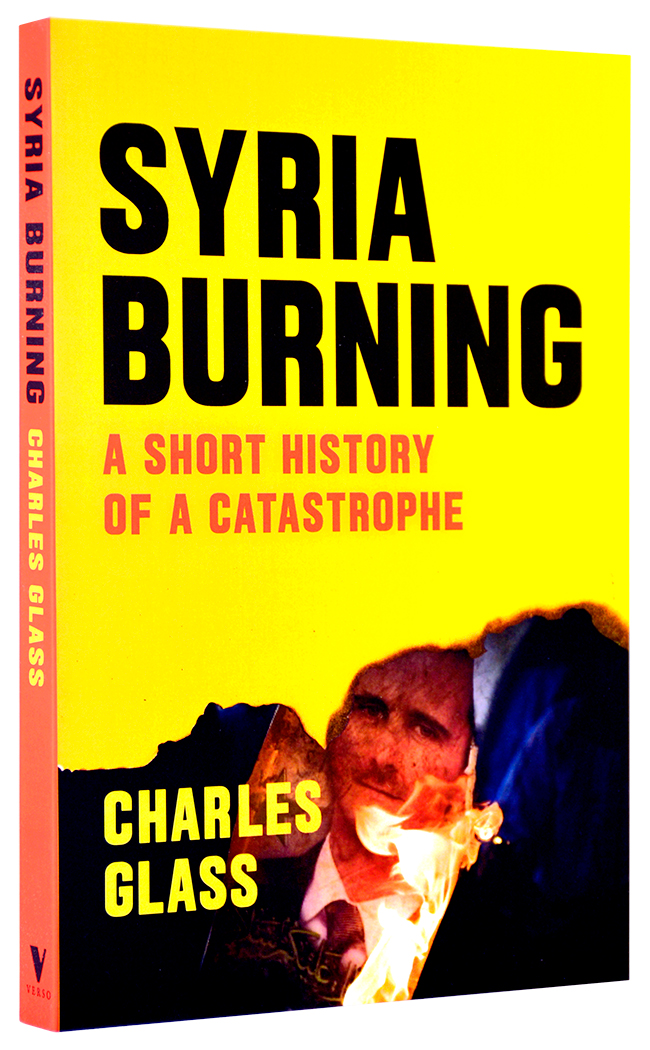 When Declan Walsh, the New York Times‘ Cairo bureau chief, visited war-weary Damascus and besieged Aleppo in May 2016, he concluded and thus verified the findings of the more experienced Charles Glass, who since the eighties has wandered Syria before and during its agonizing civil war.

“Few of the people I spoke to have any appetite for a fight” now that the U.S., Russia, Iran, and Saudi Arabia have become involved, wrote Walsh. “I didn’t ask if they wanted to fight, but if I had, I imagine their response would have been: Fight whom? And for what?”

The Syrian civil war has led to a regular stream of misjudgments, resulting in widespread confusion and ignorance. Charles Glass’s slim, truthful, and updated version of Syria Burning, originally published in 2015, is a perfect antidote to the lack of clarity by this seasoned reporter even if his analysis and reportage is also tinged with frustration.

Glass has been back and forth to that
tortured place for years.

Glass, whose maternal Lebanese Christian grandmother was born in an area now part of Syria, has been back and forth to that tortured place for years, most recently in 2015. In 1987, while researching a book when he was ABC News’s chief Middle East correspondent, he was held prisoner for 62 days in Lebanon by Shi’a radicals. Years after, he wrote in the New York Review of Books, “neither side has the power to defeat the other” and the “savagery from all sides… has become an apocalyptic struggle for dominance and survival” where all sides commit unimaginable atrocities.

As civil wars go, this one is especially unforgiving and brutal, made worse by bitter historic ethnic, religious, and tribal rivalries and the proxy wars fought by foreign powers that are there to defend its interests. The Russians and Iranians, no democrats they, want to maintain their regional influence and believe therefore that Assad’s government must not be defeated. The Qataris and their Wahhabian Saudi allies are eager to do away with Assad’s “infidel” Alawites and fend off the hated Iranians.

Meanwhile, Turkey joined the anti-Assad rebels because of their fear of the growth of Kurd power. And the goal of ISIS and al-Qaeda’s al-Nusra, says Glass, “is to make Syria something it never was: an extension of [Wahhabian] Saudi Arabia, that strictest of all Muslim faiths.”

The U.S. encouraged the downfall of Assad
from the very start.

The U.S. encouraged the downfall of Assad from the very start, helping to trigger the civil war. Glass rightly belittles its claims that it was involved because of its belief in humanity and democracy. Rather, he argues, “The U.S. opposed Assad, as did the Saudis and Qataris, because he would not relinquish the alliance with Iran that gave him a strategic asset against Israel.”

But as the Obama administration draws to an end, it finally and reluctantly accepts that a diplomatic arrangement is the only way to save what is left of Syria and its devastated people. Regime change, so loved by our combative neoconservatives, has been a miserable failure. Assad, defender of his Alawite sect, will not easily be removed by force, as so many desk warriors once predicted.

Still, should there ever be a diplomatic breakthrough any outcome will be a Pyrrhic one, with outsiders shaping the ultimate outcome. Glass was on the mark when he wrote in the book’s original edition, “When the rebellion’s foreign patrons discuss Syrian’s fate, their own interests will inevitably prevail… over the desires of a ‘native government.'”

The new edition has a helpful chronology tracking events from 2011-2015.

The new edition of Syria Burning has a helpful chronology tracking events from 2011-2015. And in a chapter fittingly titled, “With Friends Like These,” Glass offers a brief but necessary look at the country’s past, damaged by colonial rulers, including the infamous Sykes-Picot secret treaty, home-grown dictators, Israel’s conquest of the Golan Heights, and its latest disintegration beginning in 2011, when the citizens of Dera organized a peaceful demonstration against the local government’s torture of teenagers for daring to paint anti-government graffiti on walls and Assad’s forces responded violently.

The unexpected appearance of anti-Assad groups led a parade of Americans, “humanitarian interventionists, neoconservative ideologues and obtuse liberals,” to see this as just another fight for freedom rather than a deeply entangled political-religious and proxy war. After 9/11, the U.S., after all, had rendered “terrorism suspects to [Assad’s] Syria for torture.”

“Does anyone have the Syrian’s well-being in mind?” Glass asks. Vast numbers of Syrian refugees are wandering aimlessly, or squatting on Greek islands and in Jordanian tent cities. The sight of children with no place that will have them is almost unbearable. Citing UNICEF’s director in 2015, Glass writes that “Within Syria, four million children are directly affected.”

Doctors too, as Dr. Annie Sparrow, a New York-based public health doctor who has visited Syria wrote, “Now more than 16,000 doctors have fled, and many of those left are in hiding.” Then, too, as U.S.-Russian relations deteriorate so does the possibility of a negotiated settlement. In the meantime, foreign powers continue pouring weapons into Syria. “This is where superpower, Turkish and Arab policies have led,” concludes Glass.”Where will they take Syria next?”