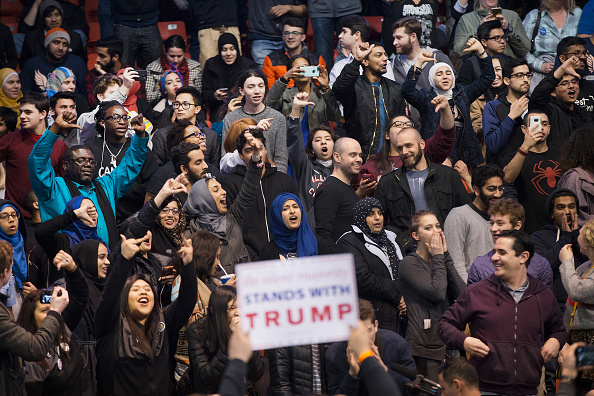 Writers from David Moberg and Clancy Segal on the Left, to moderate Ron Grossman of the Chicago Tribune, to right-wing ideologue Charles Krauthammer strangely agree on one thing: that the anti-Trump demonstrations and “violence” will turn off American voters and move them into The Donald’s camp.

To buoy their arguments, they draw on what they believe are analogous situations: the election of Richard Nixon over Hubert Humphrey after the demonstrations of 1968 and, in the case of Grossman and Segal, events in Germany’s Weimar republic during the 1930s which they say led to (or at least hastened) the rise of Adolph Hitler.

We should set the record straight on this question — not only for history’s sake but as a guide to action now and in the future.

After stating his credentials as a person who has participated in demonstrations, Grossman writes,

But the time has come to halt the demonstrations. They became counterproductive once the confrontation between Trump’s followers and opponents at the UIC Pavilion turned violent. It doesn’t matter who started it. Trump profited from it. He will continue to do so whenever images of punching and cursing partisans lead the evening news.

Yet there was virtually no violence at the rally — not even a punch until Trump called off the rally and his angry, frustrated supporters left the Pavilion. And even then there were only three arrests. Given that there were thousands of people there, it is a testament to the discipline and the peaceful intentions of all that there was no more than the kind of scuffle that occurs outside most bars in any city on a Saturday night.

I do not believe that it was violence or fear of violence that made Trump shut down the rally.

Let’s be clear: I do not, nor should anyone else, believe that it was violence or fear of violence that made Trump shut down the rally. Rather, Trump canceled because he didn’t like the odds. He loves the violence and threat of violence that he has used time and again in rallies when there are 10,000 Trumpists and a handful of demonstrators. Then his cries of “get him out” or offers to pay the bail of anyone who coldcocks the demonstrators are recorded by the media as victorious powerful cries as they are echoed and cheered by the mostly (though not all) white men who shove the lone demonstrators offering not the least bit of resistance to their blows. Dr. King would have been proud of their calm under fire.

That Trump could not control the scene at the Chicago rally; that his racist, misogynist comments were sure to be met with catcalls and boos rather than adulation; was what he feared — not the violence. That the TV cameras might have picked up white people not pummeling blacks but rather the rainbow white, black, female, male, Asian, Hispanic, Christian, Muslim crowd — Chicago and America in miniature, standing together against his divisive politics would have undermined his narrative.

I think back to the summer of 1965 when we were stoned and had cherry bombs thrown at our feet.

I think back to the summer of 1965 when we, whites and blacks together in solidarity marching peacefully with Dr. King through Marquette Park on Chicago’s southwest side, were stoned and had cherry bombs thrown at our feet. Should we have stopped the marches? Should we have believed that our very presence was the reason for racism? When we were violently attacked, were we then to blame for our injuries?

Many Trump opponents, from petition signers trying to deny Trump use of the venue to protesters at the rally, wanted to stop Trump from speaking. That’s always tempting when someone is saying things as stupid and insulting as Trump does on a regular basis.

It’s the wrong response. Progressives should try to use such an event to communicate a counter-message to the large audience available, stretching far beyond Trump fans. That message is, first of all, that Trump — as a leader and through implementation of his ideas — would be bad for you and bad for the country. Second, there are better choices for leaders and better ways of identifying the real problems of the country and their solutions (taxing rich people like Trump more and more humanely adopt a steady flow of immigrants, just to start).

Moberg is wrong. It isn’t that the demonstrators meant to stop Trump from speaking — although, like the Republican party leadership as well as anyone who cares about the impact of hate speech on the democratic experiment, I wish he would stop. But they did mean to challenge his message with a message of their own.

That message had two parts: one, that the people maligned by Trump — women, blacks, Hispanics, Muslims, immigrants — would not slink quietly into the night and agree to be slandered by him without standing up for themselves. And, equally important, that there are thousands of white people who do not identify with Trump’s message but rather identify with the diversity of religion, race, and ethnicity that has made the nation strong.

The thousands of peaceful demonstrators said that racist rhetoric has no place in Chicago.

The thousands of peaceful demonstrators inside and outside the Pavilion said that racist rhetoric has no place in Chicago, a city built by the groups Trump maligns. It’s a message, ironically, that Mayor Rahm Emanuel got. A few nights later at a Holocaust Museum Dinner, he said,

In the ’30s, when there was a rise and discussion of the use of anti-Semitism and isolation of Jews, the world was silent. The world did not speak up, because if it was OK to happen to the Jews, because it wasn’t us. It was fine, and the allowance of that rhetoric of hatred permitted an environment and a context, at each step the erosion of people’s rights, their civil rights and our human dignity.

And then we have Krauthammer:

The political thuggery that shut down a Donald Trump rally in Chicago last week may just be a harbinger. It would be nice, therefore, if we could think straight about cause and effect. The immediate conventional wisdom was to blame the disturbance on the “toxic climate” created by Trump. Nonsense. This was an act of deliberate sabotage created by a totalitarian left that specializes in the intimidation and silencing of political opponents. … The Chicago shutdown was a planned attack on free speech and free assembly. Hence the exultant chant of the protesters upon the announcement of the rally’s cancellation: “We stopped Trump.” It had all of the spontaneity of a beer-hall putsch.

The point of free assembly and free speech
is to challenge.

The point of free assembly and free speech is to challenge. No left-wing conspiracy was needed to galvanize students and groups of activists throughout Chicago. It was the natural response of those vilified to stand up for themselves, and of students who live in a diverse society to protest the use of their campus by a bigot.

I heard these same arguments in 2002, when it became clear that Bush intended to take us to war. People were fearful and argued that perhaps we shouldn’t stir the pot. I believed and believe now if we didn’t boldly take public space to express dissent, that public space will disappear. So we proceeded to organize the October 2, 2002, rally, at which a young politician named Barack Obama spoke, that would, in some part, determine the outcome of a future election.

And the analogies. It’s apparently time to dredge up 1968 again, the demonstration that never dies. And it’s the same old crap — an acceptance by leftists, liberals, and the Right that the disruptions, the loss of the elections that year were the fault of the demonstrators in the streets of Chicago and elsewhere. Grossman writes that Richard Nixon won the election by “playing on [the] fears” of “a city under siege by long-haired, weirdly costumed hippies and anarchists” that were seen on the streets of Chicago that year.

I was an organizer of those demonstrations, and they did not sink Humphrey and elect Nixon.

I was an organizer of those demonstrations, and they did not sink Humphrey and elect Nixon. The Democratic Party’s intransigence, its unwillingness and inability to hear and incorporate the sentiments of the young, the blacks, the women, the anti-war sentiments and the ugly brutality of the state — all of those things suppressed the vote and brought on the Nixon victory.

After being shunned by our elders, attacked by the Party and the police force of its leader, did anyone really think we were gong to go out and vote for Humphrey? The nation hated the war and after the deaths of King and Kennedy and the bloodying of the young in Chicago, seeing the party as the defender of democracy and civil rights was a stretch.

What’s really ironic is that Grossman and Krauthammer really stretch and harken back to Weimar Germany in the 1930s — implying in Ron’s case that it was the action of the resistance that assured the rise of Nazism. History tells us otherwise. Most modern scholars would dispute that — some saying, in fact that it was the lack of Jewish protest (both in Germany and in America) that allowed Hitler to rise and the State Department to turn a blind eye.

2 Responses to Marilyn Katz :
Chicago activists should be commended, not scolded, for shutting down Donald Trump’s rally