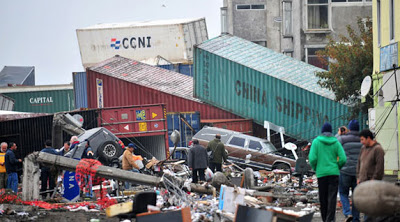 President-elect Sebastián Piñera, a billionaire businessman and right-wing figure who had close ties to the Pinochet dictatorship and the US …

“has strongly endorsed the use of troops and called for the restoration of order. ‘We must prevent vandalism and looting,’ he declared.”

We ask, “How about preventing hunger and thirst?” This militarist response to the tragedy quickly elicits thoughts of the US response to Katrina and Haiti. But it’s not surprising seeing that Piñera and Bachelet are both on Washington’s leash and ideological throwbacks to Pinochet.

The Chilean government of President Michelle Bachelet has declared martial law in parts of central Chile in the aftermath of Saturday’s devastating earthquake. Ten thousand soldiers have taken control of Maule and Bío Bío, the two regions most directly affected.

President Bachelet declared a state of siege on the pretext that it was necessary to maintain order and distribute aid. Government officials blamed so-called looters for interfering with the rescue and aid effort. This is the first state of siege declared in Chile since the fall of the bloody Pinochet military dictatorship in 1989.

So far, the death toll from the massive 8.8-magnitude earthquake and a subsequent tsunami stands at 723 and is expected to rise. Many who are now missing are believed to have drowned at sea, while others are still buried under the rubble. Some 1.5 million homes were destroyed, many of them wiped out by the tsunami.

The number of wounded and disappeared has not been established, but it is believed to be in the tens of thousands. In Concepción, Chile’s second largest city, 48 people are believed to be trapped alive under a collapsed 15-story building.

Attempts by residents to get access to food have been most concentrated in the poor neighborhoods of southern Santiago, Chile’s capital, and Concepción. Concepción’s mayor, Jacqueline Van Rysselberghe, was first to demand the use of government troops, after using Concepción police to fire tear gas at residents. “Marines and soldiers must be on the street, because there is chaos,” declared Van Rysselberghe.

Van Rysselberghe herself admitted that the quake victims are facing hunger. “If we do not solve the food problem, we will face an explosive situation,” she said. Her words were echoed by her counterpart at Bío Bío, Jaime Tohár: “We had a dramatic day. The earthquake caused enormous damage. We fully expect that the number of dead will increase. Many are still buried under the rubble.”

Furthermore, the twin blows, the earthquake followed by a tsunami, served to expose the state of Chilean infrastructure. The most essential services — electricity, water, fuel, and transportation — failed.

Because of the tsunami, some of the worst hit towns — including Constitucion, Lloca, Dichato, and others — lie on the coast. Many of these towns remain largely isolated three days later. The Los Angeles Times quoted Constitucion municipal comptroller Cesar Arrellano saying, “It seems everyone has forgotten about us. Maybe that’s because we’re out of contact.”

The Argentine daily Página 12 quoted a Concepción resident who was taking food from a store as saying, “This is for my children. I have no way of feeding them.” Another woman leaving a supermarket added, “We must eat.”

Defense Minister Francisco Vidal has publicly declared that the military will only have a “dissuasive” role. However, reports from Concepción describe how some troops lay in ambush waiting for people to remove merchandise, only to chase them away with tear gas and water cannons in scenes reminiscent of the Pinochet dictatorship. In the city of Talcahuano, near Concepción, troops repressed citizens trying to open a shipping container that they believed was loaded with bananas, sugar and oil.

So far, the police and army have arrested over 105 people. Two people have been shot and killed, one of them by the military in Concepción. Another was gunned down in the city of Chiguayante while walking after curfew; it is not known who killed him.

Government authorities now say that the Navy was slow in warning about the tsunami danger to Juan Fernandez Island, 813 kilometers (about 500 miles) off the coast of Valparaiso. The tsunami flooded half the island and killed at least six, while dozens are still missing. In the cities of Concepción, Talcauano, Curicó, San Javier, Linares, and Talca, as well as in smaller coastal towns, hundreds of families made homeless by the twin disasters are sleeping outside.

President-elect Sebastián Piñera, a billionaire businessman and right-wing figure who had close ties to the Pinochet dictatorship and the U.S., will take office on March 11. He has strongly endorsed the use of troops and called for the restoration of order. “We must prevent vandalism and looting,” he declared. Both Piñera and Bachelet have shown profound indifference to the plight of hundreds of thousands of Chilean families.

Piñera’s election last February came after two decades of Concertación governments, a partnership between the Socialist and Christian Democratic parties. Successive Concertación regimes perpetuated the disaster of Pinochet’s free-market policies. With nearly 20 percent of Chilean households below the poverty line, Chile has one of the most unequal distributions of income in South America, exceeded only by Brazil and Colombia.

Piñera is now using the crisis to renew his call for a “public-private partnership to rebuild Chile.” In fact, Piñera has made no secret that this “partnership” is nothing else than the subordination of Chilean society and government institutions to the profit needs of the corporations and banks.

This entry was posted in RagBlog and tagged Earthquake, South America. Bookmark the permalink.