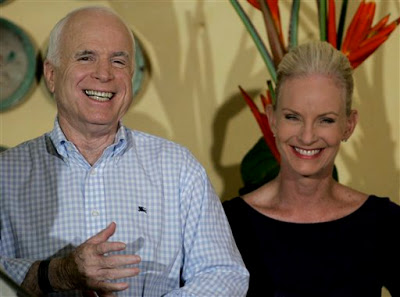 CARTAGENA, Colombia — John McCain denied a Republican colleague’s claim that he roughed up an associate of Nicaraguan President Daniel Ortega on a diplomatic mission in 1987, saying the allegation was “simply not true.”

Sen. Thad Cochran, R-Miss., told a Mississippi newspaper that he saw McCain, during a trip to Nicaragua led by former Sen. Bob Dole, R-Kan., grab an Ortega associate by his shirt collar and lift him out of his chair.

The Republican presidential contender, who is known for his hot temper, was questioned about the alleged incident at a news conference Wednesday here. He noted that at the time, he had been asked to co-chair a Central American working group in the Senate with Democrat Chris Dodd, D-Conn., and had made several trips to the region in that role.

“I had many, many meetings with the Sandinistas,” McCain said. “I must say, I did not admire the Sandinistas much. But there was never anything of that nature. It just didn’t happen.”

His comments did not square with Cochran’s detailed recollection of the alleged incident.

“McCain was down at the end of the table and we were talking to the head of the guerrilla group here at this end of the table and I don’t know what attracted my attention,” Cochran said in an interview with The Sun Herald in Biloxi, Miss. “But I saw some kind of quick movement at the bottom of the table and I looked down there and John had reached over and grabbed this guy by the shirt collar and had snatched him up like he was throwing him up out of the chair to tell him what he thought about him or whatever …

“I don’t know what he was telling him but I thought, ‘Good grief, everybody around here has got guns and we were there on a diplomatic mission.’ I don’t know what had happened to provoke John, but he obviously got mad at the guy … and he just reached over there and snatched … him.”

“I think Sen. Cochran went in to as much detail Monday as is necessary to make the point that, though Sen. McCain has had problems with his temper, he has overcome them.”

“Decades have passed since then and he wanted to make the point that over the years he has seen Sen. McCain mature into an individual who is not only spirited and tenacious but also thoughtful and levelheaded,” McPhillips added. “He believes Sen. McCain has developed into the best possible candidate for president.”

Cochran, who has complained about McCain’s temper before, said only a handful of senators took part in the trip, including former Sen. Steve Symms of Idaho. He said he didn’t know who the man McCain grabbed was except that he was an associate of Ortega.

The newspaper posted the audio of its interview on its Web site.

Lorne Craner, 49, a former foreign policy aide to McCain who took part in the trip to Nicaragua, told The Associated Press that he doesn’t recall the incident Cochran described.

“Honestly, if my boss had grabbed a foreign government official like that and lifted him up I would certainly remember that,” said Craner, who is president of the International Republican Institute, which McCain chairs.

Craner said he also doesn’t recall whether the senators met with Ortega during the trip but believes they met with the Sandinista government’s foreign minister or interior minister. He said the trip was one of several to Nicaragua made by McCain and other members of Congress around that time.

McCain has battled for years with Cochran, a senior member of the Senate Appropriations Committee, over pet projects or “earmarks” inserted by committee members into spending bills.

McCain sought to smooth things over with Cochran this year after the Mississippi senator said the idea of McCain as the GOP presidential nominee sent a chill down his spine.

Ortega, who once allied himself with Fidel Castro and the Soviet Union, headed the leftist Sandinista government and battled U.S.-backed Contra forces in the 1980s. He won re-election as Nicaragua’s president in 2006.

Go here for video of Sen. Cochran discussing the incident.