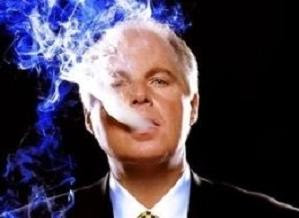 Rush Limbaugh: Not just blowing smoke.
“I’m Not Retiring Until Every
American Agrees With Me”
July 3, 2008

On his radio show Wednesday, Rush Limbaugh commented on the news of his astronomical new contract estimated at $400 million. Limbaugh told his audience, “I’m not retiring until every American agrees with me.” The deal pays Limbaugh to keep dishing his views through 2016.

The New York Times has more on how Limbaugh’s windfall stacks up against other conservative hosts.

Mr. Limbaugh is not the only radio star who is busy pumping his franchise. Sean Hannity, the country’s No. 2 host according to Talkers Magazine, is in contract talks with his current syndication company, ABC Radio, as well as Premiere, for a potential three-way deal, according to two sources close to the negotiations. They requested anonymity because the deal had not been signed.

Glenn Beck, another popular host, signed a new contract with Premiere last year that will pay him $10 million a year through 2012.

Mr. Hannity and Mr. Beck each appear on radio while hosting television shows, writing books and staging nationwide tours. Other media personalities, including Oprah Winfrey and Mr. Seacrest, also have radio engagements that feed into their cross-platform brands. But Mr. Limbaugh sticks to his self-proclaimed “golden E.I.B. microphone” — E.I.B., for excellence in broadcasting — and his associated Web site.