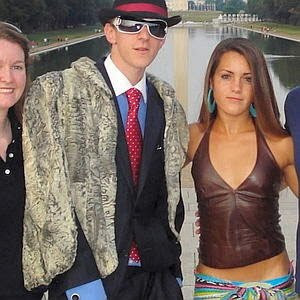 Pimp and ho: James O’Keefe and Hannah Giles went undercover at ACORN. But guess what: They weren’t dressed like this!
NYT and the ACORN Hoax:
Paper won’t admit its mistakes

Ignoring calls from numerous critics, the New York Times refuses to own up to mistakes in the paper’s coverage of the now-famous right-wing videotapes attacking the community organizing group ACORN. Instead, the paper’s public editor, Clark Hoyt, is relying on an absurd semantic justification in order to claim the paper does not need to print any corrections.

As conventionally reported in the Times and elsewhere, right-wing activists James O’Keefe and Hannah Giles dressed up as a pimp and a prostitute and visited several local ACORN offices, where office workers gave the duo advice on setting up a brothel, concealing a child prostitution ring and so forth. But many of the key “facts” surrounding the videos are either in dispute or are demonstrable fabrications.

Though O’Keefe appears in various scenes in the videos wearing a garish and absurd “pimp” costume, he in fact did not wear the outfit when he appeared in the ACORN offices (Washington Independent, 2/19/10); he was dressed in a button-down shirt and slacks. This fact undermines one of the key contentions of the ACORN smear–that the group is so hopelessly corrupt that they would dispense advice to an obvious criminal.

What’s more, the “advice” that they received, according to the transcripts released by O’Keefe and Giles, does not appear to be as incriminating as it was portrayed in the videos–and echoed in outlets like the New York Times.

A review of the Times coverage:

But the story the Times continues to tell is wildly misleading, as a review of the publicly available transcripts of his visit (BigGovernment.com) makes clear. O’Keefe never dressed as a pimp during his visits to ACORN offices, seems to never actually represent himself as a “pimp,” and the advice he solicits is usually about how to file income taxes (which is not “tax evasion”). In at least one encounter (at a Baltimore ACORN office), the pair seemed to first insist that Giles was a dancer, not a prostitute.

In the case recounted in the March 2 Times story, the transcripts show that O’Keefe did not portray himself as a pimp to the ACORN workers in Brooklyn, but told them that he was trying to help his prostitute girlfriend. In part of the exchange, O’Keefe and his accomplice seem to be telling ACORN staffers that they are attempting to buy a house to protect child prostitutes from an abusive pimp.

Throughout the months the Times covered the story, it made a major mistake: believing that Internet videos produced by right-wing activists were to be trusted uncritically, rather than approached with the skepticism due to anything you’d come across on the Web. O’Keefe and the Web publisher Andrew Breitbart refused to make unedited copies of the videotape public, and with good reason: A more complete viewing, as the transcripts show, would produce a much different impression.

While the Times decide to skip the standard rules of journalism, ACORN commissioned an independent investigation led by former Massachusetts Attorney General Scott Harshbarger (12/7/09), which noted that the

unedited videos have never been made public. The videos that have been released appear to have been edited, in some cases substantially, including the insertion of a substitute voiceover for significant portions of Mr. O’Keefe’s and Ms.Giles’ comments, which makes it difficult to determine the questions to which ACORN employees are responding. A comparison of the publicly available transcripts to the released videos confirms that large portions of the original video have been omitted from the released versions.

So what has the Times done in response? As reported extensively by blogger Brad Friedman (Brad Blog), several Times staffers have been asked to justify the paper’s lack of accountability. In the most remarkable exchange, public editor Clark Hoyt–who had criticized the paper for not doing enough reporting on the tapes–wrote that the paper had made no errors that merited a correction (Brad Blog, 2/23/10). He explained that the January 31 story “says O’Keefe dressed up as a pimp and trained his hidden camera on ACORN counselors. It does not say he did those two things at the same time.”

It is hard to believe that Hoyt actually believes what he’s saying here. The obvious implication from the language of the article (and the others documented above) is that ACORN was dispensing advice to someone dressed up in an absurd pimp outfit. The Times chose to believe that O’Keefe’s work was journalism that didn’t need to be treated skeptically. The videos were in fact a hoax, and the Times was duped. Its readers deserve to know as much–and ACORN, which suffered serious political damage as a result of the false stories, deserves an apology.

In his September column criticizing the paper for being slow to report the ACORN videos, Hoyt wrote: “Some stories, lacking facts, never catch fire. But others do, and a newspaper like the Times needs to be alert to them or wind up looking clueless or, worse, partisan itself.” Worse than looking partisan, though, is being wrong.

ACTION: Encourage New York Times public editor Clark Hoyt to recommond that the paper investigate the ACORN videos and produce a report that clarifies the record.