"Message Force Multipliers" to Be Investigated

Needless to say, I have a $20 bill that says this turns itself into a quiet whitewash for those poor, retired generals and the Pentagon weasels. Nothing whatsoever will come of this aside from a little neatly-bound report that sits on a back shelf in the National Archive and Library of Congress in perpetuity. 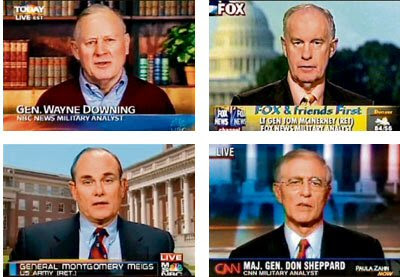 NEW YORK The Federal Communications Commission has announced that it will investigate a Department of Defense propaganda program to determine whether news networks or military analysts violated the Communications Act of 1934 and FCC rules.

Earlier this year, The New York Times reported that a Department of Defense program had ex-military officers presenting the Bush administration’s position on the War on Terror as objective analysis on major television news programs and 24-hour cable news networks. Congresswoman Rosa L. DeLauro and Congressman John Dingell wrote to the FCC to investigate allegations that the news networks and the analysts failed to disclose the ex-military officers’ ties to the Pentagon — and if that violated sponsorship identification requirements in the Communications Act.

“Given the revelations in the [New York Times] article, had the FCC not heeded our request for an investigation, it would have raised serious questions about their oversight capabilities. I am pleased with today’s news, but will continue to monitor the situation to ensure the FCC fully investigates the networks in addition to the analysts,” DeLauro said in a statement Tuesday.

According to the Times report, Department of Defense documents described the analysts as “message force multipliers” instructed to deliver “administration themes and messages” to the public “in the form of their own opinions.” The report found that these analysts — who The Times called “a media Trojan horse” for the administration — were encouraged to convey specific Defense Department talking points to the public, even when they suspected the information could be exaggerated or false.

Network officials cited in the Times story acknowledged “a limited understanding” of the on-air analysts’ ties to the government. They argued that it was the analysts’ responsibility to disclose any potential conflicts of interest.

This entry was posted in RagBlog and tagged Department of Defense, FCC, Pentagon, Propaganda, U.S. Government. Bookmark the permalink.