As the energy builds, others in the audience join the regular dancers, moved by infectious enthusiasm, some cosmic spirit… and the margaritas. 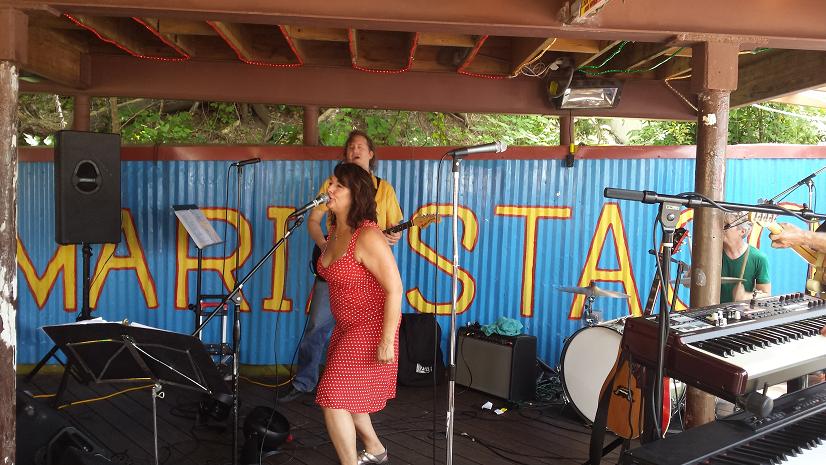 AUSTIN — About noon on any given Sunday you can stop by Maria’s Taco Xpress on South Lamar and find a happy little celebration called “Hippie Church.” The “church” part derives from the Sunday timing and the gospel/spiritual themed live music; the “hippie” part comes from the dancing regulars. Officially it is billed as “gospel brunch.” There is no proselytizing, no tithing (although they do pass a tip jar for the musicians), and no dressing up. But there are margaritas.

The self-identified hippie dancers started doing their thing about 17 years ago and have been at it since. Back then some of the dancers, including current regular Bruce Patzke, had already been into ecstatic dancing in the neighborhood on Sunday mornings. Afterwards they would head over to Maria’s previous location (next door to the current spot)  for food. 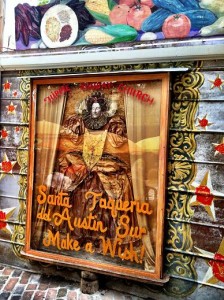 The Gospel According to Maria. Image from RandallMetting.com.

Bruce and his friend Laura Rose (who died too young earlier this Spring) suggested to Maria that she hire a band they liked called the Imperial Golden Crown Harmonizers so they could continue dancing.

(The Harmonizers were described as a “nondenominational all-inclusive powerful funky band” that was known to pass its revenues on to charity. Among band members were Malcolm “Papa Mali” Welbourne and Carolyn Wonderland.)

Maria booked them, Bruce and Laura and the other dancers invited friends, and a community tradition was born.

In the beginning they danced on the old gravel floor — so Maria would come out with water to tamp down the dust. Moving to the current location’s big stone patio with its full-sized bandstand made things that much better. Those original dancers are still seen there these Sundays. They espouse a nonviolent, green-earth, love-your-community lifestyle. These days they are joined by a crowd of Austinites, and some tourists, who fill the tables on the patio.

As the energy builds, others in the audience join the regulars, moved by infectious enthusiasm, some cosmic spirit… or the margaritas. Whichever, the dance floor fills up and is generally roaring by 2 p.m. (and lately until 3 or 3:30 p.m.) proving one doesn’t have to self-identify as a hippie or as religious to be a happy part of the foot-stomping, arm-waving, hallelujah-ing party.

When asked if they would have come all these Sundays even if there weren’t the Jesus references, Bruce Patzke just said it was a good question. Then, again, I’ve never heard him utter a word during dance time… his improv body moves speak for him. Bruce David Johnson said, “sure” but, he added, Laura Rose might not have. She did have an amazing gleeful energy, one of those people who make believing look good. I’m told her tutu will be on display inside. 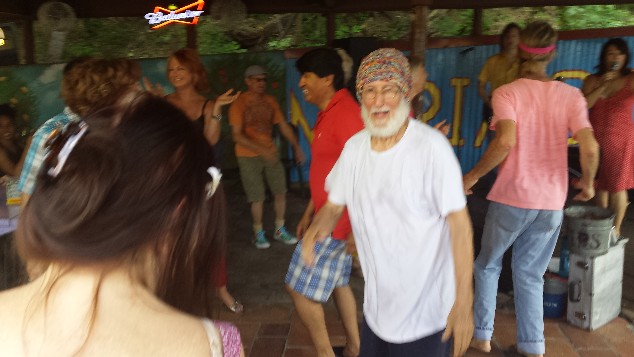 The music varies from week to week but all the bands get into their version of the Hippie Church spirit. When Austin’s premier old-time Black gospel group, the Bells of Joy (founded in 1951 and still going strong) play, the gospel is rousing and traditional. When Maria’s regular Leeann Atherton and her band play, they deliver a more soulful and inspirational version of their Friday night shows. When joyous Jesus freak PJ Liles puts his hard-rockin’ high energy South Austin Gospel Project on stage, they do a combination of original tunes and vintage favorites of the “Spirit in the Sky” and “All You Need Is Love” variety.

Maria’s always offers an accessible, affordable community experience. When you come to Hippie Church add religion only to taste. Going solo is fine. You can have brunch and just watch. You can feed off the energy. You can check out the vendors on the sidewalk and the farmer’s market across Bluebonnet. You can even go inside Maria’s, where it’s cool.