Houston’s Office of Sustainability is squirming over accusations raised by a recent article in ‘Grist’ and by local environmentalists. 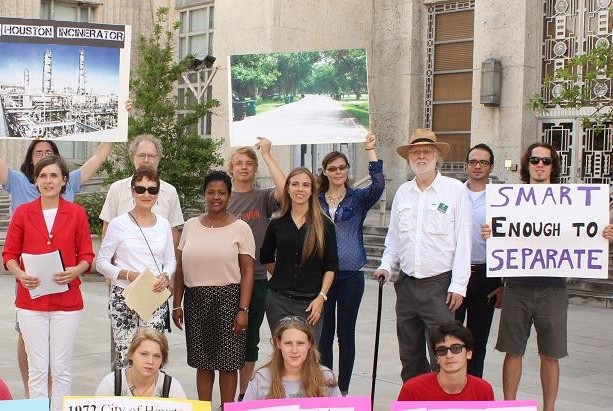 HOUSTON — Brentin Mock’s recent article for Grist covering the controversy around the City of Houston’s “One Bin for All” proposal, which calls for replacing curbside recycling with unproven and threatening waste technologies, has City officials squirming. The headline alone cuts straight to the core of the issue: “Houston’s one-bin-to-rule-them-all recycling plan smells a little like racism.”

I gave some background on the proposal in a Rag Blog Metro article and our coalition Zero Waste Houston has issued a report on it. On July 10, the City accepted five bids from companies that would receive tax incentives to build the new waste facility that environmentalists and environmental justice advocates say threaten the environment and people of color.

Dr. Robert Bullard, the “Father of Environmental Justice” who has studied and written books about pollution impacts in Houston’s African-American and Latino/a neighborhoods, wrote in a recent blog piece:

The One Bin for All fact sheet states the “new facility will likely be located at or near an existing landfill.” This statement is tantamount to the “grandfather clause” of the Jim Crow era used to give voting privileges and preferences to white males who had grandfathers who voted, while denying the vote to blacks whose forefathers were systematically by law denied the right to vote.

The City’s proposal calls for “waste to fuel” methods that the earlier request spelled out as trash gasification and catalytic conversion — technologies that are regulated as incineration technologies by the EPA, are expensive, do not work, and emit massive amounts of air pollution. Mock notes, “It’s the same ‘waste-to-energy’ experiment that’s been attempted and halted in Baltimore, and cancelled in New Orleans.”

The stated goal of ‘One Bin for All’ is to eliminate separate bins for trash and recycling.

The stated goal of “One Bin for All” is to eliminate separate bins for trash and recycling and have Houstonians throw everything into the same bin together to be separated at a centralized facility by “advanced” machinery; oh, and by workers who are likely to be low wage-earning people of color. Mock responds, “I can’t remind us enough that Martin Luther King’s last campaign was for improving the conditions of sanitation workers in Memphis — a campaign that Bullard says serves as the true genesis of the environmental justice movement.”

The Zero Waste Houston coalition has until the end of the year to convince residents and City officials that the whole “one-bin-to-rule-them-all” concept is a terrible, unnecessary idea. On August 2 we are hosting a “Waste and Environmental Justice Summit” that will bring together experts from outside of Texas including Bradley Angel and Lois Gibbs.

They will share decades of experience fighting incinerators and toxic sites, the majority of which tend to be permitted according to what Bullard calls the “path of least resistance,” in communities that are historically without political power and too burdened by other factors of life, including other sources of pollution, to fight off new threats.

The Zero Waste Houston coalition is advocating for the City to stick with single-stream recycling.

Once City officials see the obvious flaws in the plan, the Zero Waste Houston coalition is advocating for the City to stick with single-stream recycling: the separate “big, green bins” that about 70% of Houston single-family homes have for their recyclables, separate from trash. Mayor Annise Parker made the wise decision to expand that program while evaluating “One Bin for All” and we applaud her for that.

Every Houstonian deserves equitable access to public services like recycling and trash pick-up. They deserve to be educated about why recycling is one small and important action every one of us can take to protect the environment and raise consciousness of our climate impacts. No one deserves to pick through trash or breathe polluted air regardless of race, economic status, or immigration status for that matter.

We have to get the word out and empower each other to speak against this latest environmental threat. We have to prove that in this age of information and effective organizing tools that that we can change the “paths of least resistance” into paths of certain resistance by working together and strengthening our bonds to community and to the environment we share.