By noon Jesse and I were on the road, rolling west toward Durango, Colorado, to visit my ex-pro-football-playing friend David Meggyesy. 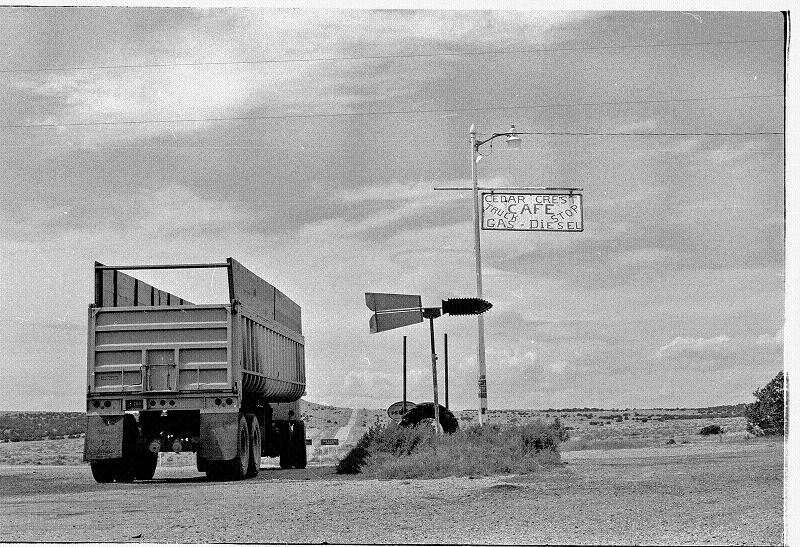 Truck and Arrow at Cedar Crest, Colorado, 1979. Photos by Michael James from his forthcoming book, Michael Gaylord James’ Pictures from the Long Haul.

It’s late summer 1979; I’m on the road with Jesse James. He’s my first-born. Born into the organization and newspaper Rising Up Angry, his mom Stormy and I named him Jesse Hampton Nathanial William Floyd Robin James, after social bandits, insurrectionists, radicals, and revolutionaries. When we set out on our adventure, Jesse was nine and I was 37.

On the morning of August 28th, I picked up a blue Mercury Capri from a Budget car rental in Chicago’s Loop. By noon Jesse and I were on the road, rolling west toward Durango, Colorado, to visit my ex-pro-football-playing friend David Meggyesy and his family. 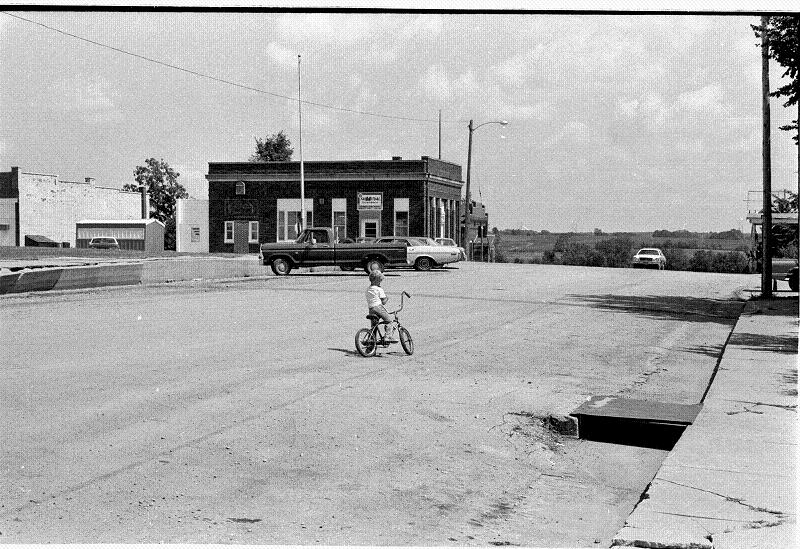 It was a big rain day of forceful storms; thunder surrounded us as the radio shared threats of tornadoes. We took refuge overnight in Shenandoah, Iowa, which I discovered was where the Everly Brothers grew up. I would later learn that Shenandoah was also the hometown of the great jazz bassist Charlie Hayden, who played a few years later at the Heartland Cafe when he, along with Fred Anderson and Hamid Drake, performed to benefit the Nicaragua Solidarity Committee.

Growing up, my father spoke about a town in Southwest Iowa named Coin. My great-grandfather, Samuel Thomas James, married Almira Candice Bacon, whose family ran a grocery store in Coin. Their children, my grandfather Roy James and my great-aunt Lulu Belle, grew up there. Aunt Lulu never married; she ran a millinery shop in Coin and eventually followed her brother and his family to Florida in the 1940’s. 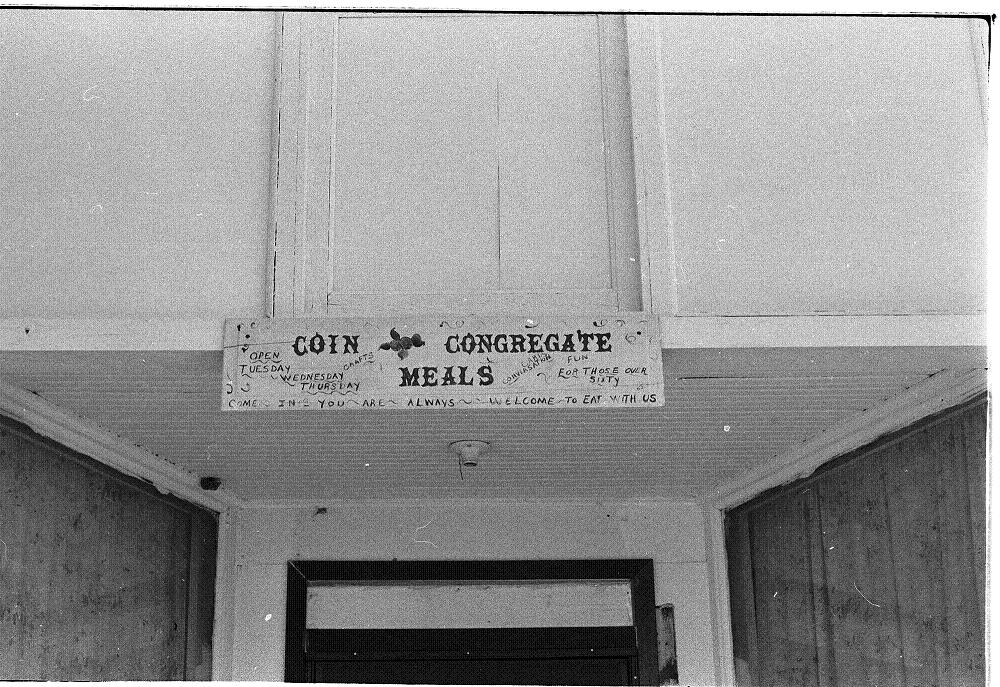 Grandpa Roy was a salesman in the meatpacking industry based in St. Joseph, Missouri, where my father was born in 1912. Then my grandparents moved with Dad and my Uncle Roy to Chicago, where Grandpa worked for Libby McNeil & Libby. St. Joseph also happens to be the birthplace of the outlaw Jesse James. Though I’m not related to him, I did innocently buy into the myth that he was a social bandit who stole from the rich and gave to the poor. This cultural misperception of Jesse James as social outlaw — rather than what it turns out he really was, a Confederate ideologue from a slave-owning family — was a monumental influence when we gave Jesse his name.

I view Coin as one of several
‘ancestral homelands.’

I view Coin as one of several “ancestral homelands,” and on a sunny August morning Jesse and I drove 16 miles from Shenandoah to Coin to pay homage. We rolled slowly into the small town. It was hot and dusty and seemingly everything — people, vehicles, trees, wind — was in slow motion. A kid on a bicycle rode around in circles in the middle of the main street. We walked around and I took pictures of the bank, the freezer locker, the Skelly gas station, the Conoco gas station, the post office, various cars and trucks and random buildings. 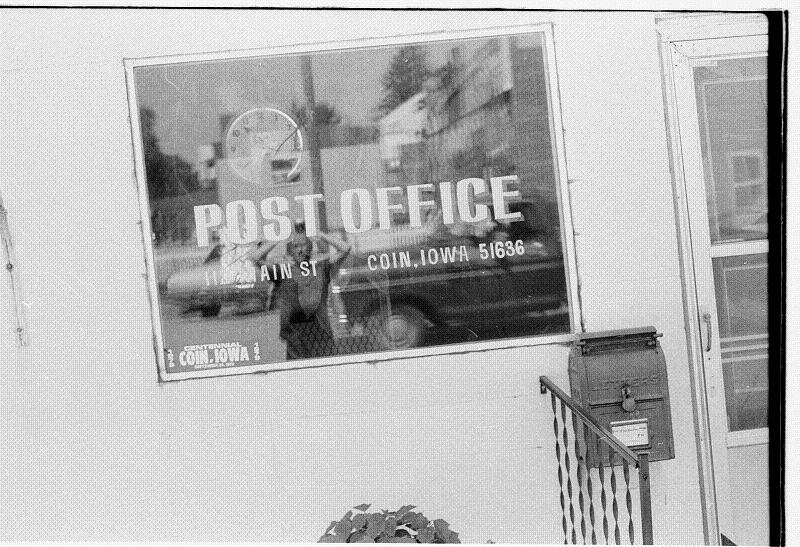 We talked history with the few folks we encountered, including the postmaster, Bill, who directed us to a couple who knew some town history, as well as the seniors at the Coin Congregate Meals center for old folks. There “people over sixty gathered for cards, conversation, and fun.” The oldest among them were lots younger than Aunt Lulu would have been, and we found no one who remembered her or her store. However, I did hear there were “people named Bacon over in Elmo, Missouri,” a familial lead for a future adventure.

Coin had flourished in the early 1900s with coal mines and its proximity to a railroad. Its population was its largest, over 800. In 1970 Coin had 300 inhabitants. By 1979 it was even smaller, and when I visited there again in 2012 (while following my youngest son’s rock band on the Plains), it was smaller still, with less than 200 people. 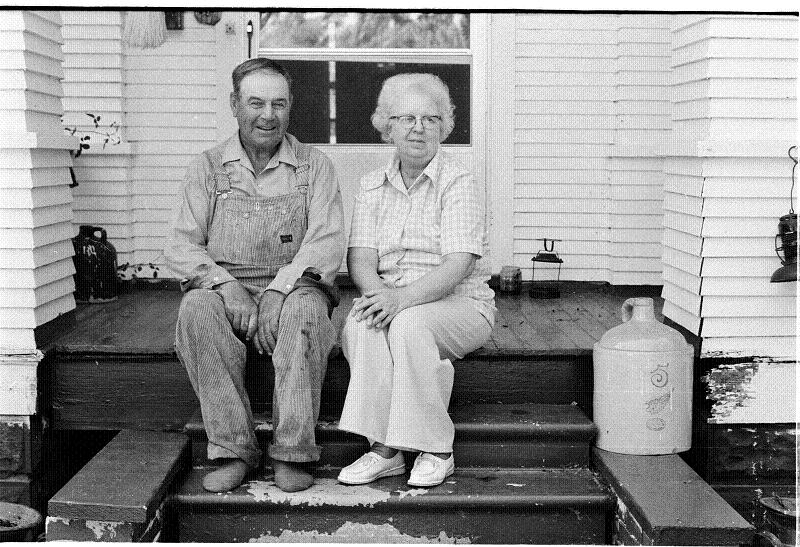 In 1979 it was already a different place. Coin had once welcomed a Chautauqua to town each summer, boasted a traveling library, and sported a bandstand for concerts by the “many fine musicians” who lived there. On the upside, in ’79 there seemed no presence of the earlier “‘not condoned’ secret Ku Klux Klan,” nor the Women’s Christian Temperance Union. A bar was located on the main street and featured Pabst Blue Ribbon.

Jesse and I said goodbye to this branch of our family roots.

Jesse and I said goodbye to this branch of our family roots. We headed west again, rolling through Missouri, Nebraska, and Kansas, where we spent the night in Sharon Springs. The next day we continued on blue highways, stopping to eat at the Cedar Crest Café and Truck Stop on Colorado Route 10 between Fowler and Walsenburg. 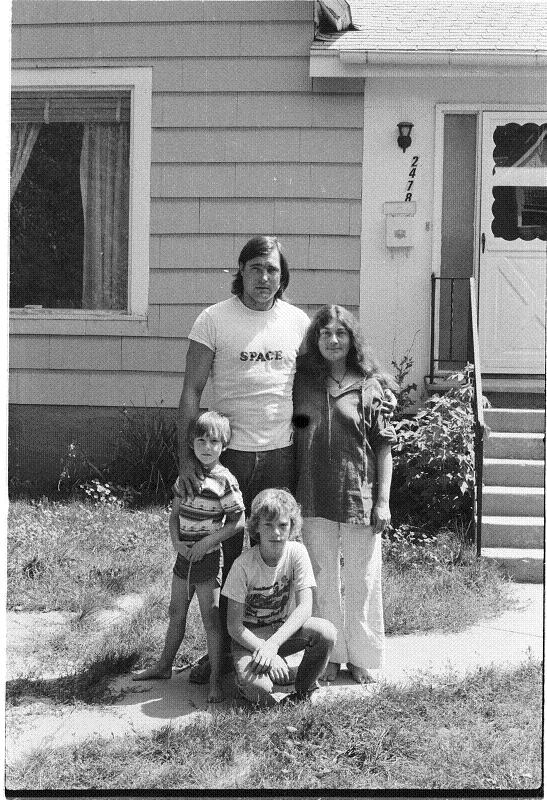 I had been here once before on an earlier trip to Durango. I loved the crude metal arrow sign pointing at the Café. Later we stopped at Adams State College in Alamosa, where I ran five miles at 6,000 feet up on their track. I love tracks! I offered Jesse some kind of reward if he could do 100 sit-ups, a challenge he met with relative ease. By 7 p.m. we were in Durango, chowing down at a place called Clancy’s.

Over the next few days we hung out with Durango pals David and Stacy Meggyesy, their children Chris, Jennifer, and Patrick, and other friends of Dave’s I had previously met, including Chuck Drulis, Ariel Moody, and Bob and Marcia. Early each morning we heard the rooster crowing; we ate food at almost every joint in town, wrote postcards, contacted others using a landline telephone, hit the outhouse, played the guitar and sang songs, rode horses, partied it up and drank at Farquahrts and the Ore House, played pool, climbed on an old railroad train engine, took an excursion to the town of Mancos, ran, swam in the river, soaked up the sun, did some reading, and wrote notes. 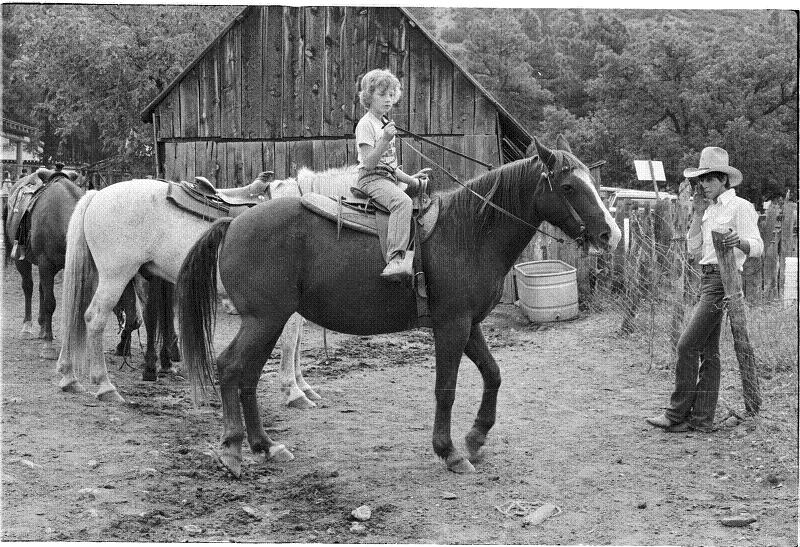 On the evening of Sunday, September 2, six days after we’d left Chicago, Jesse and I headed home. We stopped in La Junta, Colorado, but then keep rolling through the night. We slept in a park for an hour before driving onward to greet the rising sun. Eastern Kansas was misty. In Kansas City we spotted skydivers in the sky. In Missouri we ate at Voss’s Truck Stop in the wonderfully named town of Cuba, and later gassed up in Hamilton, J.C. Penny’s home town.

By early afternoon we were in Hannibal on the Mississippi River, home to Mark Twain.

By early afternoon we were in Hannibal on the Mississippi River, home to Mark Twain, Tom Sawyer, and my favorite, Huckleberry Finn. Huckleberry is one of my nicknames. When I was 10 Dad called me Huckleberry as he met me in Grand Central Station to join him for a memorable trip to Florida. I was carrying a fishing pole and a straw hat, as well as my little suitcase. I didn’t know about Huck Finn yet, but liked what Dad told me about the iconic American character.

Jesse and I walked around Hannibal. I shared that the last real time I’d spent with my dad was a road trip he and I had taken in 1969 to Hannibal, as well as Petersburg and Lewistown, Illinois, featured in the poems of Edgar Lee Masters’ Spoon River Anthology. I told my son how his grandpa and I had eaten at a steak joint outside of town and talked for hours while drinking Jim Beam. Being with my son and sharing these memories was a warm moment for me. I thought about Mark Twain’s great character Tom, who got locals to pay him for the “honor” of whitewashing his fence, and took a picture of Jesse James by a freshly whitewashed fence at the site of Tom’s deed. 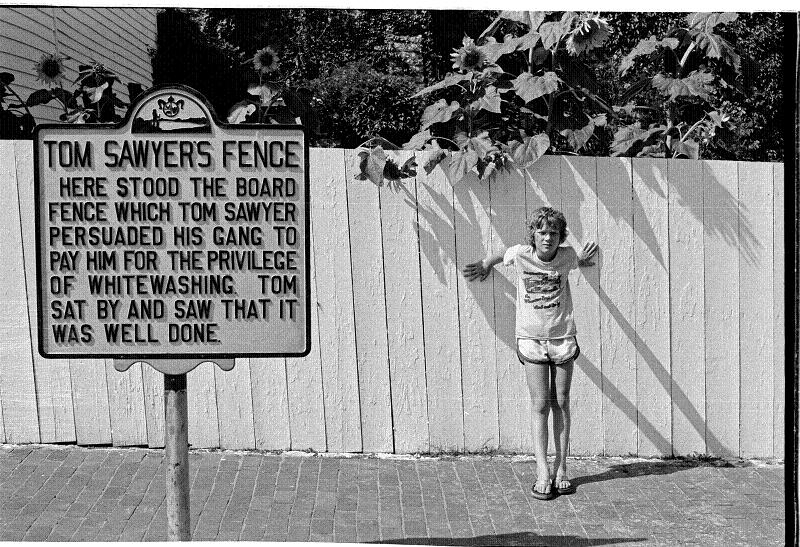 Jesse at the site of Tom Sawyer and the whitewashing of the fence, Hannibal, Missouri 1979.

In Peoria we tried to find my friend Bill Knight, my downstate writer and critic friend, but had no luck. At 10 p.m. we were back in Chicago, in our Home Sweet Home of Rogers Park. I brought Jesse home to Stormy’s, and after hanging out and sharing stories about our trip, headed home to my new studio crib overlooking Albion Street beach and the Great Lake Michigan. I inherited this wonderful space, with its loft bed built into a closet that had once housed a Murphy bed, from my friend, the musician Tom Dundee, who died years later in a tragic motorcycle accident. In addition to the bed in the closet that looked out on the Lake, he also left a New Hampshire license plate nailed to the wall by the bed: “Live Free or Die!”

As I drifted into dreamland I felt good — and pretty free.

2 Responses to Michael James :
Coin, Durango & Hannibal: On the road with Jesse James, 1979