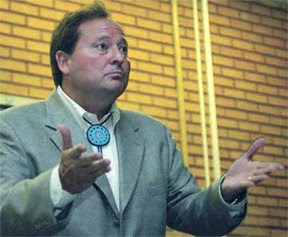 While most of the excitement last night was focused on Senator Clinton’s speech, Montana Governor Brian Schweitzer gave an electrifying (and highly animated) speech outlining a strong, clear vision for a new energy future. Given his strong performance, it came as no surprise that Schweitzer was mobbed by bloggers and camera crews this morning as he strode through the Big Tent. Here’s some excerpts from his speech:

On the crises we face:

Right now, the United States imports about 70 percent of its oil from overseas. At the same time, billions of dollars that we spend on all that foreign oil seems to end up in the bank accounts of those around the world who are openly hostile to American values and our way of life. This costly reliance on fossil fuels threatens America and the world in other ways, too. CO2 emissions are increasing global temperatures, sea levels are rising and storms are getting worse.

On an “all of the above” approach:

It’s not a question of either wind or clean coal, solar or hydrogen, oil or geothermal. We need them all to create a strong American energy system, a system built on American innovation.

We simply can’t drill our way to energy independence, even if you drilled in all of John McCain’s backyards, including the ones he can’t even remember. That single-answer proposition is a dry well, and here’s why. America consumes 25 percent of the world’s oil, but has less than 3 percent of the reserves. You don’t need a $2 calculator to figure that one out. There just isn’t enough oil in America, on land or offshore, to meet America’s full energy needs.

Invest $150 billion over the next 10 years in clean, renewable energy technology. This will create up to 5 million new, green jobs and fuel long-term growth and prosperity.

Full text of the speech is here.

This entry was posted in RagBlog and tagged Environment, Oil Exploration, Peak Oil. Bookmark the permalink.