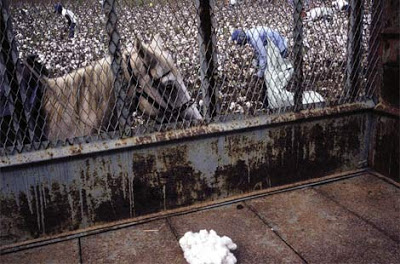 Prisoners picking cotton at Louisiana State Penitentiary in Angola. Photo by William Albert Allard / National Geographic.
‘It’s not even really a metaphor for slavery. Slavery is what’s going on’
By Maya Schenwar / August 28, 2008

On an expanse of 18,000 acres of farmland, 59 miles northwest of Baton Rouge, long rows of men, mostly African-American, till the fields under the hot Louisiana sun. The men pick cotton, wheat, soybeans and corn. They work for pennies, literally. Armed guards, mostly white, ride up and down the rows on horseback, keeping watch. At the end of a long workweek, a bad disciplinary report from a guard – whether true or false – could mean a weekend toiling in the fields. The farm is called Angola, after the homeland of the slaves who first worked its soil.

This scene is not a glimpse of plantation days long gone by. It’s the present-day reality of thousands of prisoners at the maximum security Louisiana State Penitentiary, otherwise known as Angola. The block of land on which the prison sits is a composite of several slave plantations, bought up in the decades following the Civil War. Acre-wise, it is the largest prison in the United States. Eighty percent of its prisoners are African-American.

“Angola is disturbing every time I go there,” Tory Pegram, who coordinates the International Coalition to Free the Angola 3, told Truthout. “It’s not even really a metaphor for slavery. Slavery is what’s going on.”

Mwalimu Johnson, who spent 15 years as a prisoner at the penitentiary and now works as executive secretary of the Capital Post-Conviction Project of Louisiana, concurred.

“I would truthfully say that Angola prison is a sophisticated plantation,” Johnson told Truthout. “‘Cotton is King’ still applies when it come to Angola.”

Angola is not alone. Sixteen percent of Louisiana prisoners are compelled to perform farm labor, as are 17 percent of Texas prisoners and a full 40 percent of Arkansas prisoners, according to the 2002 Corrections Yearbook, compiled by the Criminal Justice Institute. They are paid little to nothing for planting and picking the same crops harvested by slaves 150 years ago.

Many prison farms, Angola included, have gruesome post-bellum histories. In the 1950s, ’60s and ’70s, Angola made news with a host of assaults – and killings – of inmates by guards. In 1952, a group of Angola prisoners found their work conditions so oppressive that they resorted to cutting their Achilles’ tendons in protest. At Mississippi’s Parchman Farm, another plantation-to-prison convert, prisoners were routinely subjected to near-death whippings and even shootings for the first half of the 20th century. Cummins Farm, in Arkansas, sported a “prison hospital” that doubled as a torture chamber until a federal investigation exposed it in 1970. And Texas’s Jester State Prison Farm, formerly Harlem Prison Farm, garnered its claim to fame from eight prisoners who suffocated to death after being sealed into a tiny cell and abandoned by guards.

Since a wave of activism forced prison farm brutalities into the spotlight in the 1970s, some reforms have taken place: At Angola, for example, prison violence has been significantly reduced. But to a large extent, the official stories have been repackaged. State correctional departments now portray prison farm labor as educational or vocational opportunities, as opposed to involuntary servitude. The Alabama Department of Corrections web site, for example, states that its “Agriculture Program” “allows inmates to be trained in work habits and allows them to develop marketable skills in the areas of: Farming, Animal Husbandry, Vegetable, meat, and milk processing.”

According to Angola’s web site, “massive reform” has transformed the prison into a “stable, safe and constitutional” environment. A host of new faith-based programs at Angola have gotten a lot of media play, including features in The Washington Post and The Christian Science Monitor.

Cathy Fontenot, Angola’s assistant warden, told Truthout that the penitentiary is now widely known as an “innovative and progressive prison.”

“The warden says it takes good food, good medicine, good prayin’ and good playin’ to have a good prison,” Fontenot said, referring to the head warden, Burl Cain. “Angola has all these.”

However, the makeover has been markedly incomplete, according to prisoners and their advocates.

“Most of the changes are cosmetic,” said Johnson, who was released from Angola in 1992 and, in his new capacity as a prison rights advocate, stays in contact with Angola prisoners. “In the conventional plantations, slaves were given just enough food, clothing and shelter to be a financial asset to the owner. The same is true for the Louisiana prison system.”

Wages for agricultural and industrial prison labor are still almost nonexistent compared with the federal minimum wage. Angola prisoners are paid anywhere from four to twenty cents per hour, according to Fontenot. Agricultural laborers fall on the lowest end of the pay scale.

What’s more, prisoners may keep only half the money they make, according to Johnson, who notes that the other half is placed in an account for prisoners to use to “set themselves up” after they’re released.

Besides the fact that two cents an hour may not accumulate much of a start-up fund, there is one glaring peculiarity about this arrangement: due to some of the harshest sentencing practices in the country, most Angola prisoners are never released. Ninety-seven percent will die in prison, according to Fontenot.

(Ironically, the “progressive” label may well apply to Angola, relative to some locations: In Texas, Arkansas and Georgia, most prison farms pay nothing at all.)

Angola prisoners technically work eight-hour days. However, since extra work can be mandated as a punishment for “bad behavior,” hours may pile up well over that limit, former prisoner Robert King told Truthout.

“Prisoners worked out in the field, sometimes 17 hours straight, rain or shine,” remembered King, who spent 29 years in solitary confinement at Angola, until he was released in 2001 after proving his innocence of the crime for which he was incarcerated.

It’s common for Angola prisoners to work 65 hours a week after disciplinary reports have been filed, according to Johnson. Yet, those reports don’t necessarily indicate that a prisoner has violated any rules. Johnson describes guards writing out reports well before the weekend, fabricating incident citations, then filling in prisoners’ names on Friday, sometimes at random. Those prisoners would then spend their weekend in the cotton fields.

Although mechanical cotton pickers are almost universally used on modern-day farms, Angola prisoners must harvest by hand, echoing the exact ritual that characterized the plantation before emancipation.

According to King, these practices are undergirded by entrenched notions of race-based authority.

“Guards talked to prisoners like slaves,” King told Truthout. “They’d tell you the officer was always right, no matter what.”

During the 1970s, prisoners were routinely beaten or “dungeonized” without cause, King said. Now, guards’ power abuses are more expertly concealed, but they persist, fed by racist assumptions, according to King.

Johnson described some of the white guards burning crosses on prison lawns.

Much of this overt racism stems from the way the basic system – and even the basic population – of Angola and its environs have remained static since the days of slavery, according to Pegram. After the plantation was converted to a prison, former plantation overseers and their descendants kept their general roles, becoming prison officials and guards. This white overseer community, called B-Line, is located on the farm’s grounds, both close to the prisoners and completely separate from them. In addition to their prison labor, Angola’s inmates do free work for B-Line residents, from cutting their grass to trimming their hair to cleaning up Prison View Golf Course, the only course in the country where players can watch prisoners laboring as they golf.

Another landmark of the town, the Angola Prison Museum, is also run by multi-generation Angola residents. The museum exhibits “Old Sparky,” the solid oak electric chair used for executions at Angola until 1991. Visitors can purchase shirts that read, “Angola: A Gated Community.”

Despite its antebellum MO, Angola’s labor system does not break the law. In fact, it is explicitly authorized by the Constitution. The 13th Amendment, which prohibits forced labor, contains a caveat. It reads, “Neither slavery nor involuntary servitude, except as a punishment for crime where of the party shall have been duly convicted, shall exist within the United States.”

That clause has a history of being manipulated, according to Fordham Law Professor Robert Kaczorowski, who has written extensively on civil rights and the Constitution. Directly after the 13th Amendment was enacted, it began to be utilized to justify slavery-like practices, according to Kaczorowski. Throughout the South, former slaves were arrested for trivial crimes (vagrancy, for example), fined, and imprisoned when they could not pay their fines. Then, landowners could supply the fine in exchange for the prisoner’s labor, essentially perpetuating slavery.

Although such close reproductions of private enslavement were phased out, the 13th Amendment still permits involuntary servitude.

“Prisoners can be forced to work for the government against their will, and this is true in every state,” Kaczorowski told Truthout.

In recent years, activists have begun to focus on the 13th Amendment’s exception for prisoners, according to Pegram. African-Americans are disproportionately incarcerated; one in three black men has been in prison at some point in his life. Therefore, African-Americans are much more likely to be subject to involuntary servitude.

“I would have more faith in that amendment if it weren’t so clear that our criminal justice system is racially biased in a really obvious way,” Pegram said.

Prison activists like Johnson believe that ultimately, permanently changing the status quo at places like Angola may mean changing the Constitution – amending the 13th Amendment to abolish involuntary servitude for all.

“I don’t have any illusions that this is a simple process,” Johnson said. “Many people are apathetic about what happens in prisons. It would be very difficult, but I would not suggest it would be impossible.”

Even without a constitutional overhaul, some states have done away with prison farms of their own accord. In Connecticut, where the farms were prevalent before the 1970s, the farms have been phased out, partially due to the perceived slavery connection. “Many black inmates viewed farm work under these circumstances as too close to slavery to want to participate,” according to a 1995 report to the Connecticut General Assembly.

For now, though, the prison farm is alive and well in Louisiana. And at Angola, many prisoners can expect to be buried on the land they till. Two cemeteries, Point Lookout 1 and 2, lie on the prison grounds. No one knows exactly how many prisoners are interred in the former, since, after a flood washed away the first Angola cemetery in 1927, the bodies were reburied in a large common grave.

Point Lookout 1 is now full, and with the vast majority of Angola’s prisoners destined to die in prison, Point Lookout 2 is well on its way, according to King.

“Angola is pretty huge,” King said. “They’ve got a lot of land to bury a lot of prisoners.”

No one knows how many of the prisoners kept in involuntary servitude at Angola are innocent. But at least one who has proven his innocence in court, overturning his conviction, is still behind bars. Please see “Declared Innocent, but Not Free.”