Moon over Miami : Spyin’ on My Love and Me… 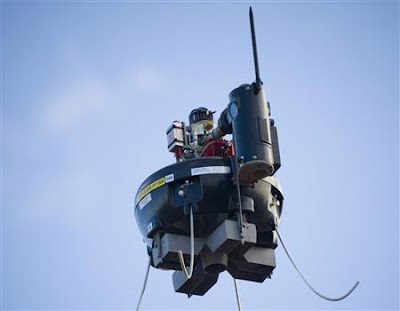 Unmanned Aerial Vehicle (UAV), aka Spy in the Sky.

Spy-in-the-sky drone sets sights on Miami
By Tom Brown /Reuters / March 26, 2008
MIAMI – Miami police could soon be the first in the United States to use cutting-edge, spy-in-the-sky technology to beef up their fight against crime.

A small pilotless drone manufactured by Honeywell International, capable of hovering and “staring” using electro-optic or infrared sensors, is expected to make its debut soon in the skies over the Florida Everglades.

If use of the drone wins Federal Aviation Administration approval after tests, the Miami-Dade Police Department will start flying the 14-pound (6.3 kg) drone over urban areas with an eye toward full-fledged employment in crime fighting.

“Our intentions are to use it only in tactical situations as an extra set of eyes,” said police department spokesman Juan Villalba.

“We intend to use this to benefit us in carrying out our mission,” he added, saying the wingless Honeywell aircraft, which fits into a backpack and is capable of vertical takeoff and landing, seems ideally suited for use by SWAT teams in hostage situations or dealing with “barricaded subjects.”

Miami-Dade police are not alone, however.

Taking their lead from the U.S. military, which has used drones in Iraq and Afghanistan for years, law enforcement agencies across the country have voiced a growing interest in using drones for domestic crime-fighting missions.

Known in the aerospace industry as UAVs, for unmanned aerial vehicles, drones have been under development for decades in the United States.

The CIA acknowledges that it developed a dragonfly-sized UAV known as the “Insectohopter” for laser-guided spy operations as long ago as the 1970s.

And other advanced work on robotic flyers has clearly been under way for quite some time.

“The FBI is experimenting with a variety of unmanned aerial vehicles,” said Marcus Thomas, an assistant director of the bureau’s Operational Technology Division.
“At this point they have been used mainly for search and rescue missions,” he added. “It certainly is an up-and-coming technology and the FBI is researching additional uses for UAVs.”

U.S. Customs and Border Protection has been flying drones over the Arizona desert and southwest border with Mexico since 2006 and will soon deploy one in North Dakota to patrol the Canadian border as well.

This month, Customs and Border Protection spokesman Juan Munoz Torres said the agency would also begin test flights of a modified version of its large Predator B drones, built by General Atomics Aeronautical Systems, over the Gulf of Mexico.

Citing numerous safety concerns, the FAA — the government agency responsible for regulating civil aviation — has been slow in developing procedures for the use of UAVs by police departments.

“You don’t want one of these coming down on grandma’s windshield when she’s on her way to the grocery store,” said Doug Davis, the FAA’s program manager for unmanned aerial systems.

He acknowledged strong interest from law enforcement agencies in getting UAVs up and running, however, and said the smaller aircraft particularly were likely to have a “huge economic impact” over the next 10 years.

Getting clearance for police and other civilian agencies to fly can’t come soon enough for Billy Robinson, chief executive of Cyber Defense Systems Inc, a small start-up company in St. Petersburg, Florida. His company makes an 8-pound (3.6 kg) kite-sized UAV that was flown for a time by police in Palm Bay, Florida, and in other towns, before the FAA stepped in.

“We’ve had interest from dozens of law enforcement agencies,” said Robinson. “They (the FAA) are preventing a bunch of small companies such as ours from becoming profitable,” he said.

Some privacy advocates, however, say rules and ordinances need to be drafted to protect civil liberties during surveillance operations.

“There’s been controversies all around about putting up surveillance cameras in public areas,” said Howard Simon, Florida director of the American Civil Liberties Union.

“Technological developments can be used by law enforcement in a way that enhances public safety,” he said. “But every enhanced technology also contains a threat of further erosion of privacy.”

This entry was posted in RagBlog and tagged Personal Freedom, Privacy, Technology. Bookmark the permalink.

1 Response to Moon over Miami : Spyin’ on My Love and Me…