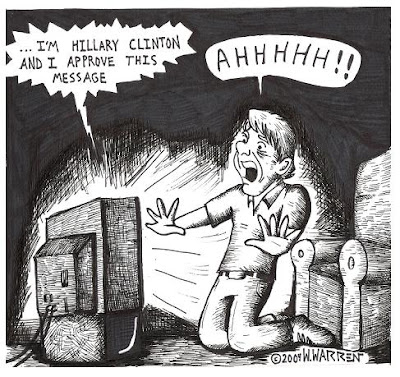 Two weeks ago, I wrote a story that observed a disturbing trend in Hillary Clinton’s campaign – her growing tendency to stretch the truth, twist what her chief rival was saying and then rely on her supporters to go on the offensive against you if you spoke up.

These tendencies were troubling, in part, because they mirrored what had become so common during George W. Bush’s years: to declare that a fantasy is the truth and then to attack the patriotism or sanity of anyone who thinks otherwise. I wrote:

“Throughout history, it’s been common for politicians to shade the truth when caught in a tight spot. But sometimes politicians push the limits, crossing the line into an Orwellian world where up is down, where bullies are victims, where people objecting to the lies are shouted down.”

The article cited a number of examples of Clinton turning reality inside out and repeating false attack lines against Barack Obama, such as claiming that he wanted to “bomb Pakistan” when he really advocated attacking al-Qaeda targets inside Pakistan if the government there refused to act. [See “Clinton’s Up-Is-Down World.”]

A week later, I cited a report in the Boston Globe about Clinton exaggerating her behind-the-scenes support for the State Children’s Health Insurance Program – which was fashioned and passed by a bipartisan congressional effort led by Sen. Ted Kennedy, D-Massachusetts, and Sen. Orrin Hatch, R-Utah. I noted that Clinton had transformed her peripheral role into a central theme of her campaign.

“In Clinton’s narrative, she picked herself up from her failed health-care plan, learned some lessons, and then pushed through a slimmed-down measure (S-CHIP) that has produced important results for millions of American families,” my story said. [See “Clinton’s Child-Health Hype.”]

Not surprisingly, these articles questioning Clinton’s truthfulness drew furious reactions from Clinton’s supporters who seem on perpetual alert to any criticism of their candidate, so it can be repudiated as an example of “sexism,” “Hillary bashing” or membership in some “Barack Obama cult.”

The Clinton campaign seems to have concluded that the only way to react to negative comments is by going on the attack. Some Clinton supporters have boasted of this strategy as the only way to beat the Republicans at their own game – even if the broadsides now are aimed at fellow Democrats and journalists who defended the Clintons when they faced unfair accusations in the 1990s.

But those two tendencies – stretching the truth and smacking around anyone who objects – have now led Sen. Clinton into one of the most embarrassing moments of the campaign.

To pump up her mostly ceremonial role as First Lady into experience as a national-security crisis manager, Clinton began embellishing a 1996 trip to war-torn Bosnia that she claimed was too dangerous for her husband, then-President Bill Clinton, to undertake.

When this story became part of Sen. Clinton’s stump speech, one of people on the trip, the comedian Sinbad, disputed her account, claiming that the “scariest” part of the trip was deciding where to eat.

Yet, even with the veracity of her account in question, Clinton stretched the truth even further.

“I remember landing under sniper fire,” Clinton said in a major foreign policy speech at George Washington University on March 17. “There was supposed to be some kind of greeting ceremony at the [Tuzla] airport, but instead we just ran with our heads down to get into vehicles to get to our base.”

In a fact-checking article on March 22, the Washington Post’s Michael Dobbs concluded that “Clinton’s tale of landing at Tuzla airport ‘under sniper fire’ and then running for cover is simply not credible. Photographs and video of the arrival ceremony, combined with contemporaneous news reports, tell a very different story.”

Dobbs awarded Clinton the maximum of “four Pinocchios” for telling a “whopper.”

Yet, instead of immediately retracting the false account and apologizing, the Clinton campaign went after Dobbs and the Post, trying to browbeat them into retreat on the story.

Lissa Muscatine, one of Clinton’s speechwriters in 1996 who was on the trip, accused Dobbs of failing to provide a full picture of what took place. “We were told that a welcoming ceremony on the tarmac might be canceled because of sniper fire in the hills surrounding the air strip,” she said.

Then, Gen. William Nash, who commanded U.S. troops in Bosnia, called in with a complaint that he had been misquoted when he said there was a lack of any “security threat.” He now said there were some “security concerns,” though he admitted he knew of no “sniper threat.”

Dobbs and the Post stood by their fact-checking article and the “four Pinocchios.”

It was only after CBS News ran footage of Clinton walking calmly across the tarmac with daughter Chelsea and chatting with dignitaries and a young child that Clinton began to back down.

Finally, on March 24, first the Clinton campaign and then the candidate retracted the false account, saying she “misspoke” but offering no explanation of why the error had occurred.

One possible reason for this extraordinary gaffe is that the Clinton campaign’s combativeness has veered out of control.

So, when critics questioned how her First Lady experience prepared her for that 3 a.m. “red phone” crisis that she highlighted in a campaign ad, she and the campaign charged ahead. They also may have felt they could get away with a gross exaggeration in part because they had beaten back earlier questions about her honesty.

In many ways, it appears that the Clinton campaign is replicating a typical hardball Republican campaign – or for that matter a Republican administration. Instead of self-restraint and self-criticism, it’s all about going on the attack, never admitting mistakes – and treating critics like enemies.

As the New York Times noted after Clinton’s grudging admission about the bogus sniper story, “the backpedaling was a rare instance of Mrs. Clinton’s acknowledging an error.” [NYT, March 25, 2008]

[Robert Parry broke many of the Iran-Contra stories in the 1980s for the Associated Press and Newsweek. His latest book, Neck Deep: The Disastrous Presidency of George W. Bush, was written with two of his sons, Sam and Nat, and can be ordered at neckdeepbook.com. His two previous books, Secrecy & Privilege: The Rise of the Bush Dynasty from Watergate to Iraq and Lost History: Contras, Cocaine, the Press & ‘Project Truth’ are also available there. Or go to Amazon.com.]

This entry was posted in RagBlog and tagged Graphics, Hillary, Humor, Presidential Campaign. Bookmark the permalink.