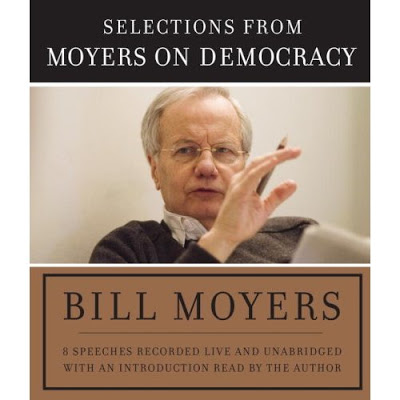 Democracy in America Is a Series of Narrow Escapes, and We May Be Running Out of Luck
by Bill Moyers / May 17, 2008

[The following is an excerpt from Bill Moyers’ new book, “Moyers on Democracy“.]

Democracy in America is a series of narrow escapes, and we may be running out of luck. The reigning presumption about the American experience, as the historian Lawrence Goodwyn has written, is grounded in the idea of progress, the conviction that the present is “better” than the past and the future will bring even more improvement. For all of its shortcomings, we keep telling ourselves, “The system works.”

Now all bets are off. We have fallen under the spell of money, faction, and fear, and the great American experience in creating a different future together has been subjugated to individual cunning in the pursuit of wealth and power -and to the claims of empire, with its ravenous demands and stuporous distractions. A sense of political impotence pervades the country — a mass resignation defined by Goodwyn as “believing the dogma of ‘democracy’ on a superficial public level but not believing it privately.” We hold elections, knowing they are unlikely to bring the corporate state under popular control. There is considerable vigor at local levels, but it has not been translated into new vistas of social possibility or the political will to address our most intractable challenges. Hope no longer seems the operative dynamic of America, and without hope we lose the talent and drive to cooperate in the shaping of our destiny.

The earth we share as our common gift, to be passed on in good condition to our children’s children, is being despoiled. Private wealth is growing as public needs increase apace. Our Constitution is perilously close to being consigned to the valley of the shadow of death, betrayed by a powerful cabal of secrecy-obsessed authoritarians. Terms like “liberty” and “individual freedom” invoked by generations of Americans who battled to widen the 1787 promise to “promote the general welfare” have been perverted to create a government primarily dedicated to the welfare of the state and the political class that runs it. Yes, Virginia, there is a class war and ordinary people are losing it. It isn’t necessary to be a Jeremiah crying aloud to a sinful Jerusalem that the Lord is about to afflict them for their sins of idolatry, or Cassandra, making a nuisance of herself as she wanders around King Priam’s palace grounds wailing “The Greeks are coming.” Or Socrates, the gadfly, stinging the rump of power with jabs of truth. Or even Paul Revere, if horses were still in fashion. You need only be a reporter with your eyes open to see what’s happening to our democracy. I have been lucky enough to spend my adult life as a journalist, acquiring a priceless education in the ways of the world, actually getting paid to practice one of my craft’s essential imperatives: connect the dots.

The conclusion that we are in trouble is unavoidable. I report the assault on nature evidenced in coal mining that tears the tops off mountains and dumps them into rivers, sacrificing the health and lives of those in the river valleys to short-term profit, and I see a link between that process and the stock-market frenzy which scorns long-term investments — genuine savings — in favor of quick turnovers and speculative bubbles whose inevitable bursting leaves insiders with stuffed pockets and millions of small stockholders, pensioners, and employees out of work, out of luck, and out of hope.

And then I see a connection between those disasters and the repeal of sixty-year-old banking and securities regulations designed during the Great Depression to prevent exactly that kind of human and economic damage. Who pushed for the removal of that firewall? An administration and Congress who are the political marionettes of the speculators, and who are well rewarded for their efforts with indispensable campaign contributions. Even honorable opponents of the practice get trapped in the web of an electoral system that effectively limits competition to those who can afford to spend millions in their run for office. Like it or not, candidates know that the largesse on which their political futures depend will last only as long as their votes are satisfactory to the sleek “bundlers” who turn the spigots of cash on and off.

The property qualifications for federal office that the framers of the Constitution expressly chose to exclude for demonstrating an unseemly “veneration for wealth” are now de facto in force and higher than the Founding Fathers could have imagined. “Money rules Our laws are the output of a system which clothes rascals in robes and honesty in rags. The parties lie to us and the political speakers mislead us.” Those words were spoken by Populist orator Mary Elizabeth Lease during the prairie revolt that swept the Great Plains slightly more than 120 years after the Constitution was signed. They are true today, and that too, spells trouble.

Then I draw a line to the statistics that show real wages lagging behind prices, the compensation of corporate barons soaring to heights unequaled anywhere among industrialized democracies, the relentless cheeseparing of federal funds devoted to public schools, to retraining for workers whose jobs have been exported, and to programs of food assistance and health care for poor children, all of which snatch away the ladder by which Americans with scant means but willing hands and hearts could work and save their way upward to middle-class independence. And I connect those numbers to our triumphant reactionaries’ campaigns against labor unions and higher minimum wages, and to their success in reframing the tax codes so as to strip them of their progressive character, laying the burdens of Atlas on a shrinking middle class awash in credit card debt as wage earners struggle to keep up with rising costs for health care, for college tuitions, for affordable housing — while huge inheritances go untouched, tax shelters abroad are legalized, rates on capital gains are slashed, and the rich get richer and with each increase in their wealth are able to buy themselves more influence over those who make and those who carry out the laws.

Edward R. Murrow told his generation of journalists: “No one can eliminate prejudices — just recognize them.” Here is my bias: extremes of wealth and poverty cannot be reconciled with a genuinely democratic politics. When the state becomes the guardian of power and privilege to the neglect of justice for the people as a whole, it mocks the very concept of government as proclaimed in the preamble to our Constitution; mocks Lincoln’s sacred belief in “government of the people, by the people, and for the people”; mocks the democratic notion of government as “a voluntary union for the common good” embodied in the great wave of reform that produced the Progressive Era and the two Roosevelts. In contrast, the philosophy popularized in the last quarter century that “freedom” simply means freedom to choose among competing brands of consumer goods, that taxes are an unfair theft from the pockets of the successful to reward the incompetent, and that the market will meet all human needs while government itself becomes the enabler of privilege — the philosophy of an earlier social Darwinism and laissez-faire capitalism dressed in new togs — is as subversive as Benedict Arnold’s betrayal of the Revolution he had once served. Again, Mary Lease: “The great evils which are cursing American society and undermining the foundations of the republic flow not from the legitimate operation of the great human government which our fathers gave us, but they come from tramping its plain provisions underfoot.”

Our democracy has prospered most when it was firmly anchored in the idea that “We the People” — not just a favored few — would identify and remedy common distempers and dilemmas and win the gamble our forebears undertook when they espoused the radical idea that people could govern themselves wisely. Whatever and whoever tries to supplant that with notions of a wholly privatized society of competitive consumers undermines a country that, as Gordon S. Wood puts it in his landmark book The Radicalism of the American Revolution, discovered its greatness “by creating a prosperous free society belonging to obscure people with their workaday concerns and their pecuniary pursuits of happiness” — a democracy that changed the lives of “hitherto neglected and despised masses of common laboring people.”

I wish I could say that journalists in general are showing the same interest in uncovering the dangerous linkages thwarting this democracy. It is not for lack of honest and courageous individuals who would risk their careers to speak truth to power — a modest risk compared to those of some journalists in authoritarian countries who have been jailed or murdered for the identical “crime.” But our journalists are not in control of the instruments they play. As conglomerates swallow up newspapers, magazines, publishing houses, and networks, and profit rather than product becomes the focus of corporate effort, news organizations — particularly in television — are folded into entertainment divisions. The “news hole” in the print media shrinks to make room for advertisements, and stories needed by informed citizens working together are pulled in favor of the latest celebrity scandals because the media moguls have decided that uncovering the inner workings of public and private power is boring and will drive viewers and readers away to greener pastures of pabulum. Good reporters and editors confront walls of resistance in trying to place serious and informative reports over which they have long labored. Media owners who should be sounding the trumpets of alarm on the battlements of democracy instead blow popular ditties through tin horns, undercutting the basis for their existence and their First Amendment rights.

[Texan Bill Moyers is the author of many books including “Moyers on Democracy” (Doubleday, 2008) and the host of the PBS show, Bill Moyers Journal.]

1 Response to Moyers on Democracy