NATO Has Developed a Strict Scenario to Convey Its Positive Message 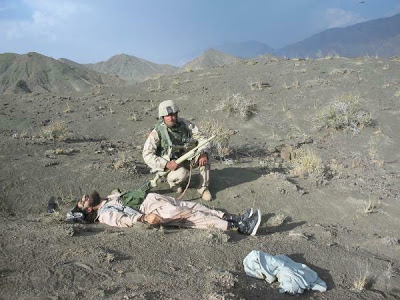 A US soldier poses with a dead Afghani man in the hills of Afghanistan.
Truth in Reporting: Meaningless to NATO in Afghanistan
By Richard Jehn / The Rag Blog / February 28, 2009

I still recall as a child the derision with which we viewed the Soviet Union, Pravda, and everything else communist. It is astounding to see, in retrospect, that the US has been nearly as controlling of its media as the Soviets ever were, particularly in the past 40 years or so.

Here is what Wikileaks has to say about the documents they discovered:

Wikileaks has cracked the encryption to a key document relating to the war in Afghanistan. The document, titled “NATO in Afghanistan: Master Narrative”, details the “story” NATO representatives are to give to, and to avoid giving to, journalists.

The encrypted document, which is dated October 6, and believed to be current, can be found on the Pentagon Central Command (CENTCOM) website oneteam.centcom.mil. [UPDATE: Fri Feb 27 15:18:38 GMT 2009, the entire Pentagon site is now down–probably in response to this editorial.]

The encryption password is progress, which perhaps reflects the Pentagon’s desire to stay on-message, even to itself.

Among the revelations, which we encourage the press to review in detail, is Jordan’s presense as secret member of the US lead occupation force, the ISAF.

Jordan is a middle eastern monarchy, backed by the US, and historically the CIA’s closest partner in its extraordinary rendition program. “the practice of torture is routine” in the country, according to a January 2007 report by UN special investigator for torture, Manfred Nowak.1

The document states NATO spokespersons are to keep Jordan’s involvement secret. Publicly, Jordan withdrew in 2001 and the country does not appear on this month’s public list of ISAF member states.2

Some other notes on matters to treat delicately are:

* Any decision on the end date/end state will be taken by the respective national and/or Alliance political committee. Under no circumstances should the mission end-date be a topic for speculation in public by any NATO/ISAF spokespeople.
* The term “compensation” is inappropriate and should not be used because it brings with it legal implications that do not apply.
* Any talk of stationing or deploying Russian military assets in Afghanistan is out of the question and has never been the subject of any considerations.
* Only if pressed: ISAF forces are frequently fired at from inside Pakistan, very close to the border. In some cases defensive fire is required, against specific threats. Wherever possible, such fire is pre-coordinated with the Pakistani military.

Altogether four classified or restricted NATO documents on the Pentagon Central Command (CENTCOM) site were discovered to share the ‘progress’ password. Wikileaks has decrypted the documents and released them in full: