Ni’lin: Opposed to Israeli Occupation, But Sympathetic to the Suffering of the Jews 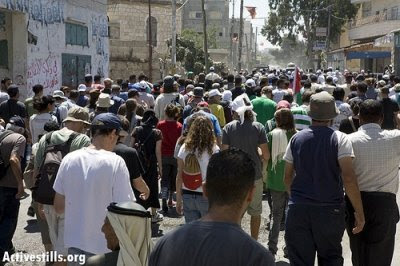 For a change of pace from our usual dose of death and destruction, an inspiring story:

The village of Ni’lin has paid a particularly high price for its struggle against the Wall and annexation of its lands, including two children who were shot and killed by the Israeli Army in the summer of 2008. Nevertheless, the people of the village continue to protest at least once a week against the Wall, joined by Israeli activists, in particular Anarchists Against the Wall, as well as international activists.

The article below tells the remarkable story of how the people of Ni’lin have put together an exhibit to honor International Holocaust Remembrance Day and commemorate the near destruction of European Jewry under the Nazis.

Activists who have been in Ni’lin recently told me that the reason they heard for the village committee putting together the exhibit was this: if Israeli activists care enough to come to their village to learn about the Palestinian struggle and act in solidarity with Palestinians, they feel obligated to learn Jewish history as well.

BETHLEHEM – Every Friday, the West Bank village of Ni’lin is home to some of the most violent clashes between Israeli soldiers and Palestinian, Israeli and international demonstrators.

Each week, activists from the village’s Land Defence Committee stage demonstrations at the Separation Barrier which cuts off as much as half the village’s farmland and water from its inhabitants.

As a reporter for a Palestinian news agency in Bethlehem, I too travelled to Ni’lin, but last weekend beheld a spectacle perhaps more remarkable than these weekly Barrier protests: Villagers had set up an exhibition to coincide with the United Nations-declared International Holocaust Remembrance Day on 27 January, an exhibition organised by Ni’lin’s Popular Committee Against the Wall.

Hassan Moussa, the exhibition’s organiser, spoke to me over the phone from Ni’lin. And despite the hot-headed rhetoric coming from both sides that weekend (a number of protesters were tear-gassed just hours before), Moussa explained that the exhibit was organised with the most noble of intentions.

“Nobody thinks war will lead to peace and security. It will lead to more violence and hatred and agony, as well as suffering to this area, which is neither in our interest, nor the Israelis.”

Since late January the people of Ni’lin have opted to complement their demonstrations with something “to show the Israelis that we feel sorry for them.”

As a Palestinian activist, Moussa says he also wants to convey his suffering: “My suffering will not lead to peace. When I lose my land, it’s like losing your heart from your body.”

The village’s Municipality hosted the Holocaust Remembrance Exhibition at its headquarters in Ni’lin, where organisers say more than 1,000 visitors have paid tribute to the victims of Nazi atrocities committed against Europe’s Jews.

The exhibition of posters and texts, provided by an Israeli Holocaust museum, details “the genocide that was committed against the Jewish people during the 1930s and 1940s in Germany and in other parts of Europe,” Moussa explains.

“We admit that there was terrible pain inflicted on the Jewish people as a result of this genocide,” he says. “We are feeling sorry for this genocide.”

Moussa added that “the Palestinians have no connection at all with that genocide… It is our fate to live on this land so we have to live in peace—only peace can bring security,” he explains.

“We feel sorry for you,” Moussa says when pressed for his message to the Israeli people. “Our hand is extended in peace; we are ready to make peace with the Israeli government.”

The exhibit is not only intended for Israelis, though a number have attended. “Frankly speaking, the people who came and visited the exhibition, [for the] first time saw something about this genocide,” Moussa says. “They heard some from their history books, but this is the first time they saw the pictures.”

The most common Palestinian reaction after seeing the horrifying images, Moussa tells me, is that “they feel sorry; they feel really sorry for the [Jews], once they see the posters.”

One in five of the village’s 5,000 residents are estimated to have viewed the exhibition, with hundreds more from Israel and elsewhere in the West Bank. It is still open to the public at the village’s municipality building.

“We received so many visitors,” Moussa says. “Even some Israeli activists came to have a look at the exhibition.” Particularly interested were those Israelis whose ancestors survived the Holocaust: “They came and they appreciated the idea.”

“And they expressed their sorrow for us,” Moussa notes. “Their message, as well as my message, is to create a new type of generation that really believes in peace.”

[George Hale is a journalist with Ma’an News Agency, a Palestinian newswire. He lives in the West Bank city of Bethlehem. This article was written for the Common Ground News Service (CGNews).]