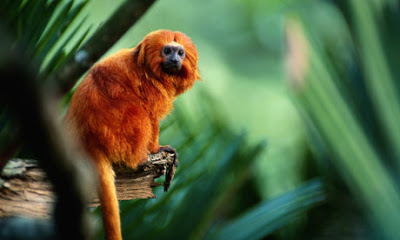 Nearly half of all primate species are now threatened with extinction, according to an evaluation by the International Union for the Conservation of Nature (IUCN).

The study, which drew on the work of hundreds of scientists and is the most comprehensive analysis for more than a decade, found that the conservation outlook for monkeys, apes and other primates has dramatically worsened.

In some regions, the thriving bushmeat trade means the animals are being “eaten to extinction”.

The two biggest threats faced by primates are habitat destruction through logging and hunting for bushmeat and the illegal wildlife trade.

“We’ve raised concerns for years about primates being in peril, but now we have solid data to show the situation is far more severe than we imagined,” said Dr Russell Mittermeier, the chairman of the IUCN Species Survival Commission’s primate specialist group and the president of Conservation International.

“Tropical forest destruction has always been the main cause, but now it appears that hunting is just as serious a threat in some areas, even where the habitat is still quite intact. In many places, primates are quite literally being eaten to extinction.”

The picture in south-east Asia is particularly bleak, where 71% of all Asia primates are now listed as threatened, and in Vietnam and Cambodia, 90% are considered at risk. Populations of gibbons, leaf monkeys and langurs have dropped due to rapid habitat loss and hunting to satisfy the Chinese medicine and pet trade.

“What is happening in south-east Asia is terrifying,” said Dr Jean-Christophe Vié, the deputy head of the IUCN species programme. “To have a group of animals under such a high level of threat is, quite frankly, unlike anything we have recorded among any other group of species to date.”

Overall, 69 species and sub-species (11% of the total) are considered critically endangered, including the mountain gorilla in central Africa, Tonkin snub-nosed monkey in Vietnam and grey-shanked douc langur from Asia.

In the endangered category are another 137 species and sub-species (22%) including the Javan gibbon from Indonesia, golden lion tamarin from Brazil and Berthe’s mouse lemur from Madagascar. Species are judged to be in these categories if they have a small population size, are suffering rapid population declines and have a limited geographic range.

The apparent jump in the numbers of threatened primates from 39% to 48% has not in reality happened in the course of one year. The major new analysis has filled in missing data that was not available previously, according to Michael Hoffman at Conservation International. The last major assessment was carried out in 1996.

“The situation could well have been as bad as this, say, five years ago, we just didn’t know. But now we have a much better indication of the state of the world’s primates – and the news is not good,” he said.

The review, which is funded by Conservation International, the Margot Marsh Biodiversity Foundation, Disney’s Animal Kingdom and the IUCN is part of an unprecedented examination of the state of the world’s mammals to be released at the IUCN World Conservation Congress in Barcelona in October.

However there was some good news for primates. In Brazil, the black lion tamarin has been brought back from the brink of extinction and shifted from the critically endangered to endangered category. This is the result of a concerted conservation effort which has also benefited the golden lion tamarin – it was downlisted to endangered in 2003.

“The work with lion tamarins shows that conserving forest fragments and reforesting to create corridors that connect them is not only vital for primates, but offers the multiple benefits of maintaining healthy ecosystems and water supplies, while reducing greenhouse gas emissions that cause climate change,” said Dr Anthony Rylands, the deputy chair of the IUCN primate specialist group.

The scientists also came close to downlisting the mountain gorilla to endangered following population increases in their forest habitat that spans the borders of Rwanda, Uganda and Democratic Republic of Congo. However, political turmoil in the region and an incident in which eight animals were killed in 2007 led to the decision to delay the planned reclassification.

There are 634 species and sub-species of primate including apes, monkeys, tarsiers and prosimians. Of these, 69 are now categorised as critically endangered, 137 as endangered, 97 as vulnerable and 36 as near threatened.

In Africa, 63 species or subspecies are in the top three categories (37% of African primates). The new assessment moved L’Hoest’s monkey (Cercopithecus l’hoesti), which is found in Nyungwe National Park, Rwanda, from vulnerable to endangered, for example.

In Asia, 120 species or sub-species are threatened (71%). The grey-shanked douc langur (Pygathrix cinerea) in Vietnam has been moved from endangered to critically endangered.

In Madagascar, 41 species and sub-species are threatened (43%). The black-and-white ruffed lemur, (Varecia variegata) for example, was endangered and is now considered critically endangered.

In Mexico, south and central America 79 species and sub-species are listed as threatened (40%). The cotton-top tamarin (Saguinus oedipus) is now critically endangered, but was endangered.

This entry was posted in RagBlog and tagged Ecology, Endangered Species, Habitat, Primates. Bookmark the permalink.