India : On the Front Lines of the Global Food Crisis 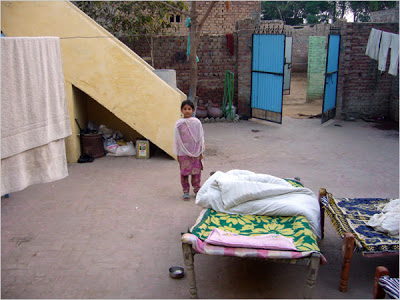 The courtyard of the home where I stayed.
Things that go bump in the night
By Mira Kamdar / August 4, 2008

JAITU, FARIDKOT DISTRICT, India—Wrapped in a musky blanket under a fan that was frantically trying to beat the air free of mosquitoes, exhaustion was finally overtaking me when I vaguely felt something nuzzle my left hand. In theory, I was alone, deadbolted away from the family of six, who were sleeping outside on string cots so I could have the only bed in the only room of their home. At the second nudge, definitely mammalian, adrenaline flooded my body, sending me shrieking into an upright position. A rat scurried away.

I had traveled to this remote part of Punjab to try to understand India’s agricultural dilemma. Squeezed between the relentless pressure to increase production and an environment stressed to the breaking point, the agricultural miracle brought to Punjab by the Green Revolution back in the 1960s was failing, the terrible costs of its success tearing at the fabric of Punjabi society. If Punjab couldn’t find a way out of the current impasse, I didn’t see how India, or the world as a whole, was going to feed a growing population in the face of environmental collapse and growing political instability fueled by scarcity.

The next morning, after tea with milk from the cow tethered out front, my host family’s son Jitinder gave me a ride into town on the back of his motorcycle so I could attend a workshop on natural farming organized by Umendra Dutt, an agricultural activist who runs an organization called Kheti Virasat. Kheti Virasat’s work focuses on raising awareness about the damaging effects of chemical pesticides, synthetic fertilizers, and overwatering, as well as the mass dislocation of people away from their land and communities into an urban-oriented economy that can’t absorb them.

I braced myself as lightly as I could against Jitinder’s body, conscious of being a woman perched behind an unrelated man in a strongly patriarchal culture, as we wove our way out of the dirt lanes of the village and onto a narrow asphalt road that cut through an endless sea of ripening wheat, passing bullock carts piled high with fodder, tractors clanking toward the fields. I hadn’t ridden on the back of a motorcycle in a long time. It was exhilarating to feel the air whipping around my face, the throb and bob of the machine gripped between my legs. I could smell the green scent of the plants and hear the morning bustle of the birds. Farmers and laborers were already wading through the waist-high wheat, spraying pesticide by hand from backpack reservoirs.

When the Green Revolution arrived in Punjab, the “land of five rivers,” India faced chronic food shortages. A combination of massive irrigation infrastructure mandated by the Indian state, new hybrid seeds, chemical fertilizers, and pesticides boosted yields to record levels over the following decades, saving India from the specter of mass famine. With just 1.5 percent of India’s land area, Punjab produces 20 percent of the country’s wheat and 12 percent of its rice. It provides 60 percent of the government’s reserve stocks of wheat and 40 percent of its reserves of rice, the country’s buffer against starvation. 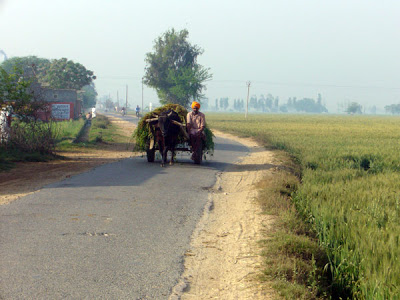 A farmer on the road.
Punjab’s amazing productivity made it possible for India to feed most of a growing population that tripled from 350 million when the country became independent in 1947 to more than 1.2 billion people today. In 2001, India even began to export grain, though critics claim this impressive achievement was gained at the expense of India’s poor.

Only two years later, in 2003, India had to reverse the funnel and import grain, something it had not done in decades. Every year since then, India has imported more and more of its food. Panic-buying by India is credited with helping to raise the price of wheat on global markets by more than 100 percent last year, causing prices to spike around the world, from pasta in Italy to bread in Russia.

In an era of global food scarcity, economic growth does not guarantee India the ability to buy as much food as it needs on the world market. And steps India has taken to liberalize its domestic grain market, a move hailed by some as a necessary corrective to a system riddled with inefficiencies and disincentives to production, may have contributed to the current food crisis by allowing agribusiness giants to siphon off huge quantities of grain.

Meanwhile, the tragic social and environmental costs of the Green Revolution are escalating, threatening a return of the political violence that took the lives of more than 25,000 Punjabis during the 1980s and ’90s when a violent secessionist movement—fueled by profound social disruption caused by the Green Revolution, which dislocated small farmers—militated for an independent Punjab, which would be called Khalistan. The movement had religious overtones derived from Punjab’s majority religion, Sikhism. The Indian state came down on the movement as hard as it could, culminating in June 1984 with an attack by the Indian army on Sikhism’s most sacred site, the Golden Temple in Amritsar. Then-Prime Minister Indira Gandhi was subsequently assassinated by her Punjabi Sikh bodyguards, after which thousands of Sikhs were massacred in retribution. The government, at the least, looked the other way.

The nasty side effects of the Green Revolution have gotten only worse in the years since. The irrigation canals are drying up. Water tables are sinking. According to a new report from Punjabi University in Patiala, pesticide levels, among the most elevated in the world, are being blamed for actually altering the DNA of Punjabis exposed to them.

Meanwhile, there aren’t enough jobs or slots at the better schools and universities. Unemployment is high. The children of farmers, who’ve grown up with the tantalizing images of the new urban India paraded before them on television, have no desire to farm but no skills to do much else. Drug addiction, fueled by heroin transited from Afghanistan via Pakistan through Indian Punjab on its way to Europe and North America, is rampant, claiming an astonishing 40 percent of the state’s youth and 48 percent of its farmers and laborers, according to one recent report.

Before my encounter with the rat, as I sat with my host family around the bed that would become mine for the night, Jitinder’s father, Prem Kumar, proudly showed me a photograph of his father, a Communist rebel who eluded Indian government forces for years. “He was never caught,” he exulted. “He fought in the tradition of Bhagat Singh,” Prem Kumar added proudly, citing a local boy turned national hero who didn’t hesitate to take up arms against the British in the early 20th century.

Prem Kumar explained to me that most of the land around the village was mortgaged to banks or private moneylenders. The water table keeps sinking, and the villagers are having trouble getting enough water to irrigate their fields. Prices for everything have gone up. Many people in the village are sick with cancer.

His 8-year-old granddaughter’s playmate came over to visit with her grandmother.

“That’s horrible,” I replied. “What happened to her?”

“She had brain cancer,” he replied. Looking at the girl cradled in her grandmother’s lap, he sighed: “Such a beautiful child, like her mother.”

It was true, she was a beautiful child. I looked into her big brown eyes and wondered what her future held.

This entry was posted in RagBlog and tagged Food Crisis, Green Revolution, Hunger, India, Poverty, The World. Bookmark the permalink.