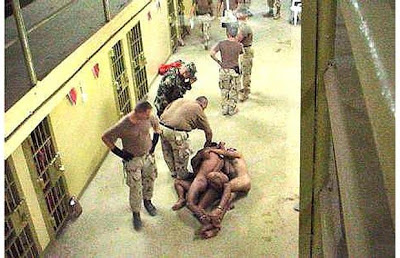 Previously released photo from Abu Ghraib prison. The new photos, many reportedly depicting sexual abuse, are said to be much worse. Photo from Telegraph, U.K.
Photographs which Barack Obama is attempting to censor include images of apparent rape and sexual abuse, it has emerged.

At least one picture shows an American soldier apparently raping a female prisoner while another is said to show a male translator raping a male detainee.

Further photographs are said to depict sexual assaults on prisoners with objects including a truncheon, wire and a phosphorescent tube.

Another apparently shows a female prisoner having her clothing forcibly removed to expose her breasts.

Detail of the content emerged from Major General Antonio Taguba, the former army officer who conducted an inquiry into the Abu Ghraib jail in Iraq.

Allegations of rape and abuse were included in his 2004 report but the fact there were photographs was never revealed. He has now confirmed their existence in an interview with the Daily Telegraph.

Maj Gen Taguba, who retired in January 2007, said he supported the President’s decision, adding: “These pictures show torture, abuse, rape and every indecency.

“I am not sure what purpose their release would serve other than a legal one and the consequence would be to imperil our troops, the only protectors of our foreign policy, when we most need them, and British troops who are trying to build security in Afghanistan.

“The mere description of these pictures is horrendous enough, take my word for it.”

In April, Mr Obama’s administration said the photographs would be released and it would be “pointless to appeal” against a court judgment in favour of the American Civil Liberties Union (ACLU).

But after lobbying from senior military figures, Mr Obama changed his mind saying they could put the safety of troops at risk.

Earlier this month, he said: “The most direct consequence of releasing them, I believe, would be to inflame anti-American public opinion and to put our troops in greater danger.”

It was thought the images were similar to those leaked five years ago, which showed naked and bloody prisoners being intimidated by dogs, dragged around on a leash, piled into a human pyramid and hooded and attached to wires.

Mr Obama seemed to reinforce that view by adding: “I want to emphasise that these photos that were requested in this case are not particularly sensational, especially when compared to the painful images that we remember from Abu Ghraib.”

The latest photographs relate to 400 cases of alleged abuse between 2001 and 2005 in Abu Ghraib and six other prisons. Mr Obama said the individuals involved had been “identified, and appropriate actions” taken.

Maj Gen Taguba’s internal inquiry into the abuse at Abu Ghraib, included sworn statements by 13 detainees, which, he said in the report, he found “credible based on the clarity of their statements and supporting evidence provided by other witnesses.”

Among the graphic statements, which were later released under US freedom of information laws, is that of Kasim Mehaddi Hilas in which he says: “I saw [name of a translator] ******* a kid, his age would be about 15 to 18 years. The kid was hurting very bad and they covered all the doors with sheets. Then when I heard screaming I climbed the door because on top it wasn’t covered and I saw [name] who was wearing the military uniform, putting his **** in the little kid’s ***…. and the female soldier was taking pictures.”

The translator was an American Egyptian who is now the subject of a civil court case in the US.

Three detainees, including the alleged victim, refer to the use of a phosphorescent tube in the sexual abuse and another to the use of wire, while the victim also refers to part of a policeman’s “stick” all of which were apparently photographed.