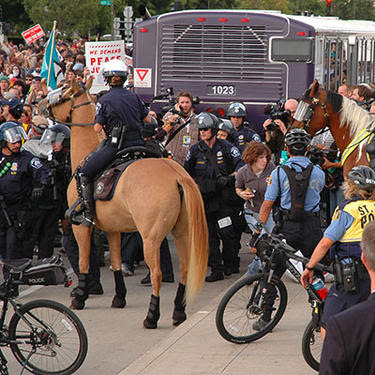 Using horseback officers, police moved to cut off demonstrators during GOP convention in St. Paul. Photo by Nick Vlcek / City Pages.
‘Dozens of journalists, photographers, bloggers and videomakers arrested in an orchestrated round up of independents covering the Republican National Convention’
By Timothy Karr / September 3, 2008

In St. Paul this week, a new generation of media makers is under assault by the city’s mayor and law enforcement officers.

These local officials think freedom of the press extends only to their allies in mainstream media.

For the rest of us, practicing journalism is a crime.

While reports of brutal police arrests and home invasions are still coming in, by Tuesday night the picture became clear.

The list of those detained ranges from the well-known (Democracy Now’s Amy Goodman) and well-established (Associated Press photographer Matt Rourke) — to the bootstrapping bloggers and video makers who are covering local protests for TheUptake.org, Twin Cities Indymedia, I-Witness and other outlets.

Police — with firearms drawn — raided a meeting of the video journalists and arrested independent media, bloggers and videomakers. Journalists covering protests have been pointed out by authorities, blasted with tear gas and pepper spray, and brutalized while in custody.

Democracy Now’s Goodman reports that a U.S. Secret Service agent ripped her press credentials from her neck the moment she identified herself to him as a member of the media. Her producers emerged yesterday from their jail cells bloodied and scarred, reporting unusually harsh treatment at the hands of local and federal authorities.

St. Paul Mayor Chris Coleman hasn’t responded to repeated phone and e-mail requests for comments on the targeting of journalists. Instead he praised the work of Police Chief John Harrington and painted those arrested as a small band of outsiders and vandals intent upon committing felonies against the good people of his city.

In less than a day, more than 35,000 people have signed a letter from Free Press (my employer) to Mayor Coleman condemning the arrests and demanding that he and local prosecutors immediately “free all detained journalists and drop all charges against them.”

But when Salon.com’s Glenn Greenwald pressed Harrington and Coleman to respond to widespread reports of journalist arrests, Harrington claimed ignorance while Coleman stood silent at his side.

Police spokesman Don Walsh intervened only to say that “arrest have been made” and that all those arrested were involved in criminal activities and not “simply non-participants.”

In a bizarre editorial on Tuesday, the Minneapolis St. Paul Star Tribune hailed the police crackdown as “appropriate,” blaming unrest on outsiders from beyond the Twin Cities.

“Many of those arrested in St. Paul weren’t carrying IDs or wouldn’t give their names. Those who were identified came from Lexington, Ky.; Brooklyn, N.Y.; Portland, Ore., and dozens of other U.S. cities,” they wrote. “These weren’t the sons and daughters of Highland Park and south Minneapolis.”

The Star Tribune itself is owned by out-of-towners from Avista Capital Partners, a New York City private equity firm specializing in energy, healthcare and media investments.

Other than a brief story about Goodman’s arrest, the paper has failed to report on the apparent targeting of independent reporters, even though groups like the Committee to Protect Journalists, Reporters Without Borders and the National Association of Hispanic Journalists have sounded the alarm.

Sweeping Real Journalism Under the Carpet

Here we have every indication of an orchestrated assault by federal and local law enforcement agencies to stifle independent sources of information. As shocking as this conduct is, more disturbing is the fact that the mayor’s office and the local daily seem so unconcerned.

It’s not difficult to understand why. With local leaders making every effort to roll out the welcome mat for mainstream media and the GOP, they’d rather sweep beneath the carpet those pesky independents who are showing us a side of the spectacle that is less scripted for prime time.

As an elected representative, Mayor Coleman should take a stand on behalf of a free press, rein in aggressive and violent tactics by local law enforcement, stop the targeting of journalists and immediately drop all charges against them.

As a powerful news organization, the Star Tribune should know better, and should be sticking up for a free press, regardless of the form it takes.

For now, the democratic spirit of journalism is alive not in the Star Tribune newsroom, but among the video-blogs and cellphone reports that are bubbling up from outside the convention.

Timothy Karr is Campaign Director for Free Press and SavetheInternet.com. Tim served as executive director of MediaChannel.org and vice president of Globalvision New Media and the Globalvision News Network. He has also worked extensively as an editor, reporter and photojournalist for the Associated Press, Time Inc., New York Times and Australia Consolidated Press. Karr critiques, analyzes and reports on media and media policy in his popular blog, MediaCitizen.