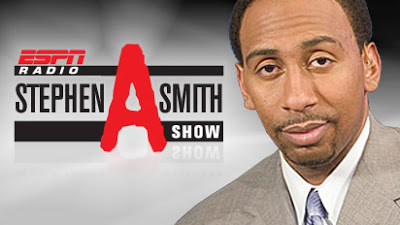 Controversial sports analyst Stephen A. Smith — once a rising star at ESPN radio and television — is leaving the air because he refused a pay cut.

With all the hair-pulling about the demise of the print media, and especially the reports on the massive city room layoffs, here’s a little factoid that may just be slipping through the cracks. It’s black journalists who are taking the hardest hits, by far. As if the miniscule minority presence on news staffs wasn’t already scandalous enough — now they’re the ones being laid off first.

Newsroom jobs held by Black journalists were cut by an alarming 13.5 percent in 2008, making African-Americans the single most targeted group for job losses in newsrooms across the country according to a study released by ASNE, the American Society of News Editors.

“While NABJ [National Association of Black Journalists] recognizes the current economic downturn, newspapers must stop the bloodletting of Black journalists now,” said NABJ President Barbara Ciara. “It is unconscionable that this industry is willing to jeopardize the accuracy, integrity and bottom line of its publications.”

In all, nearly 400 Black journalists lost their jobs in 2008, representing the largest drop in all minority employment and scaling back progress toward diversity in newsrooms to 1998 census levels.

Furthermore, 458 newspapers still have no minorities in their newsrooms and only 111 out of 633 newspapers surveyed have achieved parity with the minority population in their communities.

“Newsrooms without Black journalists are unacceptable,” Ciara said. “NABJ calls on industry leaders to re-commit to making diversity a priority – even in this difficult climate.”

The decrease in minority representation in newsrooms runs counter to general population trends, which project the United States will become a “majority minority” country by mid-century.

In 1999, ASNE defined as its goal to deliver parity in newsroom representation by 2025. NABJ stands ready to work with ASNE and media companies to reach this goal and promote diversity in the nation’s newsrooms.

“As minority communities grow in number and influence, newspapers must prepare for the future by preserving the jobs of Black journalists and grooming them for the leadership positions of tomorrow,” Ciara said.

“The most innovative and profitable newspapers are those with diverse perspectives and minorities in their upper ranks.”

An advocacy group established in 1975 in Washington, D.C., NABJ is the largest organization of journalists of color in the nation, with more than 4,100 members, and provides educational, career development and support to black journalists worldwide.

This entry was posted in RagBlog and tagged African-American, Journalists, Racism, Unemployment. Bookmark the permalink.