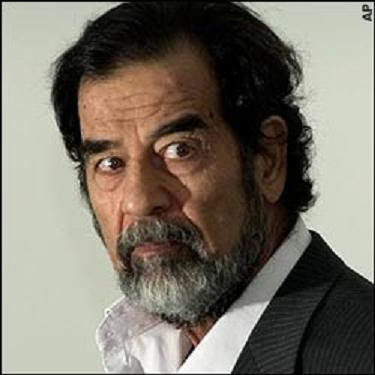 By Damien McElroy / Telegraph.co.uk / March 16, 2008
Baghdad — A prominent figure in the Iraqi opposition movement that helped propel America and Britain to war in 2003 has said the country would be better off if Saddam Hussein was still in power.

Lufti Saber, once a key lieutenant of the first post-Saddam Iraqi prime minister, Ayad Allawi, has a ringside seat on the new Baghdad regime as an aide to the American-led military coalition. But the political manoeuvring and administrative incompetence he has witnessed on a daily basis has led the former political prisoner to radically revise his views of the invasion of Iraq.

“None of these people trust each other,” he said. “Everything comes down to that. The whole system is set up to ensure that nobody does anything that somebody else thinks is wrong.”Saddam had a way of rising above that. As soon as he made a decision, it happened.

People knew it had to be done. It didn’t matter where they were in the country, they knew the floor at work had to be cleaned, just in case Saddam turned up. Now the country is engulfed in chaos and nobody does anything because they all refuse to take responsibility.”

Iraq marks the fifth anniversary of the US-led invasion this week, plagued by problems seen only in failed states.

Many former supporters of the invasion share a bleak outlook on the country’s future prospects, though polls show general population retains hopes for the future.

Mr Saber spent eight years on death row during Saddam’s dictatorship before he was release in an eve of battle amnesty.

He had worked for Dr Allawi’s Iraq National Accord, which in the mid-1990s was based in the Kurdish enclave in northern Iraq.

Before his arrest, Mr Saber was instrumental in orchestrating a failed coup within the senior military ranks in 1996.

“I never thought I would say it given that he sentenced me to death,” he said. “But I find myself wishing Saddam was still here. Only he had the knack of running this god-forsaken country.”

Despite the failure of the putative putsch, Dr Allawi, a secular Shi’ite Muslim from a prominent Baghdad merchant family, emerged as a close ally of Western intelligence agencies, including MI6 and the CIA.

After the invasion, he stood as one of a handful of potential leaders of a new government.
But Washington installed an interim administration, the Coalition Provision Authority, which struggled to establish its authority.

By the time Dr Allawi accepted a leather-bound portfolio certifying his appointment as interim prime minister in July 2004, a multi-pronged insurgency had already taken root.

With Iraqi’s splitting along confessional lines, there was no prospect of the kind of revitalised secular state he sought flourishing.

Fundamentalist Shi’ite political parties triumphed in the 2005 elections and have held sway ever since.

Baghdad, once a cluttered stew of religious and ethnic groups, emerged from the 2006 civil war as a predominately Shi’te city, pocketed with Sunni enclaves.

When Saddam was executed in 2006, Shi’te politicians danced around his body. Mr Saber suffered in the sweep of violence across the city.

“My home is in Ameriya district, which was mixed but is now exclusively Sunni,” he said.

“I’ve had to move to a flat which is an area that is protected. My family are in Syria. It is unbelievable to me that I am so close to not being able to live in my country.”