A Hard Rain’s A Gonna Fall 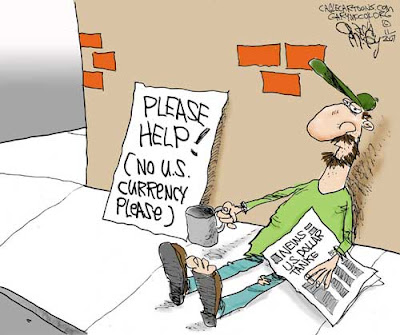 16/03/08 “Washington Post” — -It was sheer coincidence that David M. Walker spent his last day Wednesday as comptroller general of the United States at the same time that the House and Senate were beginning to debate their budget resolutions for next year.

As the head of the Government Accountability Office, the auditing arm of Congress, Walker has been perhaps the most outspoken official in Washington warning of the fiscal train wreck that awaits this country unless it mends its ways.

The budget resolutions approved last week both envisage an increase in the deficit next year. The Senate predicts $366 billion, the House $340 billion. Meanwhile, over the next five years, independent estimates are that the national debt, already $9 trillion, will grow by $2 trillion more. Almost half the government debt owed to banks or individuals is held by foreign creditors, notably China, Japan and the OPEC nations, up from 13 percent five years ago.

Both resolutions forecast a balanced budget in 2012, but they use the same dubiously optimistic assumptions President Bush employed to make the same claim for his tax-and-spending proposal. Once again, the hard choices are being pushed off to some hazy future.

For much of his nine years as comptroller general, and with increasing urgency in recent times, Walker has been warning policymakers in Washington and audiences around the country that this nation is courting disaster by not paying its bills.

Last week, he cautioned in a speech that “largely due to the aging of the baby boomers and rising health care costs, the United States faces decades of red ink. . . . If the United States continues as it has, policymakers will eventually have to raise taxes or slash government services that U.S. citizens depend on and take for granted. . . . Over time, the U.S. government could be reduced to doing little more than mailing out Social Security checks to retirees and paying interest on the massive national debt.”

Even as a nonpartisan employee of Congress, Walker has been blunt enough to say, again and again, that “at both ends of Pennsylvania Avenue and on both sides of the political aisle, there are too few leaders who face the facts” about this fiscal mess.

When I went to see Walker two days before he left office, he told me he had begun to realize he was pushing the limits on advocacy at the GAO. So he jumped at the opportunity offered him by Peter G. Peterson, the son of Greek immigrants who made a fortune as a Wall Street investment banker. Peterson has created a foundation bearing his name and promised to fund it with $1 billion over a period of years. Walker is now running it.

The foundation’s main focus will be to spur action to curb the deficits, but other target areas will include education, especially fiscal literacy and civics, energy conservation and nonproliferation of nuclear and biological weapons.

17/03/08 “Global Research” — – March 17 is St. Patrick’s Day, when people of all national origins raise a glass and declare, “Today we’re all a bit Irish!” This may be truer than we know. The Irish were driven to America by debt, and they are leading the Western world in household debt today. The London Daily Telegraph reported on March 13, 2008 that household debt in Ireland has reached 190 percent of disposable income, the highest in the developed world; and that the Irish banking system is suffering such acute strains from the downturn in the housing market that it may have to nationalize its banks.1 The same may soon be happening in the United States, and for much the same reasons.

Debt Drives the Irish to America

A short review of the history of the Irish in North America reveals that few were here before 1845, when a disease struck the potato crops of Ireland, wiping out the chief or only source of food for many poor farmers. Famine continued for the next five years, killing over 2.5 million people. “God put the blight on the potatoes,” complained the Irish farmers, “but England put the hunger upon Ireland.” Farmers who were heavily in debt were shipped to England to pay the rent owed to their landlords. Impoverished Irish immigrants saved what little money they could to send family members across the Atlantic, traveling on overcrowded ships on which many died of disease or hunger on the way. When they arrived, the Irish men had to fight – often physically – to get labor jobs involving long hours and low pay; while the women worked mainly as servants (called “Brigets”) to upper-class families. Despite their very low wages, they managed to send a bit of money back to their families, until other family members had enough to buy the ship tickets to America. In the American South (mainly New Orleans), the Irish lived in swamp land infested with disease. Here, Irish men were looked upon as actually lower than slaves. As one historian put it, if a plantation owner lost a slave, he lost an investment; if he lost a laborer, he could always get another. Because the Irish workers were plentiful and expendable, they were often sent in to do dangerous jobs for which the slave-owners were reluctant to send their valuable slaves.2

This form of “debt slavery” or “debt peonage” was not just an accidental development of history. It was a deliberately-planned alternative to the slave arrangement in which owners were responsible for the feeding and care of a dependent population, and it is still with us today. Although European financiers were in favor of an American Civil War that would return the United States to its colonial status, they admitted privately that they were not necessarily interested in preserving slavery. They preferred “the European plan”: capital could exploit labor by controlling the money supply, while letting the laborers feed themselves. In July 1862, this ploy was revealed in a notorious document called the Hazard Circular, which was circulated by British banking interests among their American banking counterparts. It said:

Slavery is likely to be abolished by the war power and chattel slavery destroyed. This, I and my European friends are glad of, for slavery is but the owning of labor and carries with it the care of the laborers, while the European plan, led by England, is that capital shall control labor by controlling wages. This can be done by controlling the money. The great debt that capitalists will see to it is made out of the war, must be used as a means to control the volume of money. To accomplish this, the bonds [government debt to the bankers] must be used as a banking basis. . . . It will not do to allow the greenback, as it is called, to circulate as money any length of time, as we cannot control that.

A system of “debt peonage” is inextricably linked to a banking system in which money is issued privately by bankers and lent to the government rather than being issued as “greenbacks” by the government itself Today the “European plan” has evolved into the private central banking system, and it has come to dominate the economies of the world. A private central bank creates money simply by printing it or entering it as an accounting entry, then lends it to the federal government in exchange for government bonds or debt. Private commercial banks create many more dollars in the same way, advancing money created as accounting-entry loans without even incurring the cost of a printing press. Except for coins, the entire U.S. money supply is now created as a debt to private bankers.4 Banks create the principal but not the interest necessary to pay back their loans, so more money is always owed back than was put into the money supply in the first place. More loans must therefore continually be taken out to cover the interest, spiraling the economy into increasing levels of debt and inflation, in a futile attempt to repay principal and interest on a debt that is actually impossible to repay. The result is “debt peonage,” and it has systematically reduced the people to working for the company store, bound to their corporate masters for the food, shelter and health care formerly provided by slave owners under the old physical-slave system.

This entry was posted in RagBlog and tagged Economy, Human Rights, Poverty. Bookmark the permalink.