Now If We Could Just Get Private Money Out of Elections … 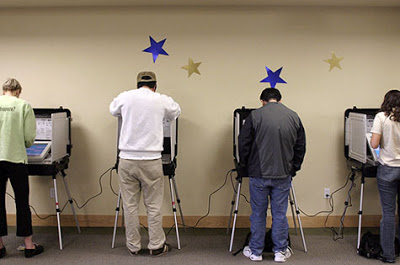 Seven Ways Your Vote Might Not Count This November
By Steven Rosenfeld / August 22, 2008.

Some of the most serious election protection problems can be discovered and fixed before the presidential voting begins.

While many voting rights activists are focused on stopping potential problems on Election Day, there are several milestones between now and the 2008 presidential vote that would preview problems with voting on Nov. 4.

What voters often do not know is that long lines or delays in polling place voting can result from many factors — some administrative, some technical, some partisan. Many of the problems that arise on Election Day not only can be identified before voting in November, they can be resolved by election officials. The following issues will directly impact how voters are accommodated.

According to the federal law that governs how people may be removed from voter lists, the last day that most registered voters can be purged is 90 days before an election, which would have been Aug. 5 for the presidential election. However, some states are not following the process in the National Voter Registration Act, according to voting rights attorneys. Moreover, because purges are often conducted secretly, people who do not call local election offices to confirm their registration status may discover later this fall that they cannot vote.

Solution: Voters, particularly those who have not voted in recent years, should call their local election office to confirm they are registered at their current address. If they are not properly registered, they should update their voter registration. This must be done before registration closes, which is the first week in October in 27 states. Advocacy groups can facilitate this by accessing a voter registration list and reviewing it with community activists. (Editor’s note: Web sites and experts to help voters are listed below.)

After the Democratic Convention, the Obama campaign will launch a national voter registration drive to bring millions of new voters to the polls in November, according to top campaign officials. This could be the largest voter drive in decades. In previous years, local election officials have complained about receiving too many registration forms at the last minute to verify before Election Day. In two Ohio cities in 2004, Cleveland and Toledo, boxes of registrations went unprocessed by Election Day.

Historically, students have been criticized for not voting, but what is often overlooked are the obstacles created by local officials or state legislators that discourage student voting. The most frequent barriers involve state residency and ID requirements. In some places, registrars tell students that a campus post office box is not a proper address and refuse to register students for that reason.

Solution: Students who experience problems with voter registration should contact organizations working on voter registration, or the presidential campaigns, or election protection lawyers who have the legal expertise to help with registration and could go to court to enforce student voting rights.

How local election officials allocate voting machines — literally the number of machines per polling place — can lead to smooth voting, or long lines prompting some voters to leave without casting a ballot. In 2004 in Ohio, a shortage of voting machines created lines and delayed voting that disenfranchised minority voters in the state’s inner cities. In contrast, nearby wealthier suburbs experienced no lines, due to an ample number of voting machines.

Solution: Local election integrity groups or election activists should ask election officials how they are deploying the machines and ask officials what the basis is for that decision. Election officials tend to use historic turnout patterns over several voting cycles, which, as was the case this spring, underestimated the number of primary and caucus voters. Local officials should be encouraged to use the voter turnout numbers from 2008’s primaries and caucuses and updated voter registration statistics, rather than voter turnout figures from 2004.

The nation’s elections are staffed by 2 million poll workers, who typically are senior citizens who undergo a few hours of training before Election Day. A shortage of poll workers, or poll workers who are uncomfortable with the latest electronic voting technology or the latest fine print in election law, will lead to delays in voting.

Solution: Local election integrity activists or local media should ask election officials where there are likely to be shortages of poll workers, and help recruit key staffers there. Election officials, for their part, should turn to local high schools and colleges to recruit poll workers. Arizona, a state with restrictive election laws, even allows 17-year-olds to serve as poll workers. Often these students can receive school credit while learning how elections really work.

In recent years, the GOP has threatened to challenge the credentials of new voters, claiming it is seeking to protect the process from so-called voter fraud, or people posing as other voters. Democrats have not embraced this tactic, which causes delays in voting, with equal vigor. The first sign of voter challenges will come in October, when newly registered voters will receive a non-forwardable postcard from a political party that welcomes the voter to the political process. Sometimes these voters are selected based on race or ethnicity. Those recipients whose cards are returned — because the address is incorrect — can be put on a voter challenge list. Come Election Day, partisan volunteers can stand at the polls and insist those voters produce ID and other verification, such as utility bills, to prove who they are before voting. Voters who cannot produce such identification are not permitted to vote.

Solution: Any voter who registers after Aug. 1 and who receives such a postcard from a political party not of their choosing should recognize they could be on a “caging” or voter challenge list. This is especially true for college students and minority voters. Because vote caging can be illegal in certain circumstances, voters should notify voter protection groups, who should follow up on the vote challenge scheme. Also, those registrants should bring additional ID to the polls on Election Day, and they should alert the presidential campaign they support to investigate if voter caging is likely, as election lawyers take this issue very seriously. If voters are properly credentialed, they will get to vote. This tactic is designed to create delays at the polls, so people often leave in frustration, particularly those who try to vote on their way to work or on their lunch hour.

Problems with voting early or voting by mail can be a sign of election difficulties. For soldiers and others overseas, if absentee ballots are not sent out early enough, they may not get delivered in time for recipients to return them to be counted.

Solution: Any problems with early voting should be reported to voter registration organizations, which will forward them to voting rights lawyers who will investigate and possibly intervene. Voting rights groups can monitor requests for absentee ballots to see how many have been sent out, which will indicate if voting this way will be problematic. The military and some states are instituting a system of registering voters online, but ballots still have to be requested and submitted on time. Federal Express has a program to help deliver military ballots.

Solutions and Resources for Voters

Finding your local election official: The Overseas Vote Foundation has a nationwide directory on its Web site that has all the contact information you need to verify and update voter registration information.

Registering to vote: Many sites offer help with getting voter registration forms, but it is up to the voter to ensure they are filled out properly and returned on time. Two good sites that offer this service include NonProfitVote.org, which has a home page map that launches all kinds of helpful registration and other information from every state; and DeclareYourself.org, which is seeking to register students and young people.

Legal help for any voting problem: The Lawyers Committee for Civil Rights Under Law has a live hotline, 1-866-OUR-VOTE, and callers can talk to a lawyer or expert who will help resolve issues or refer the matter to lawyers who will go to court. This is the country’s largest election protection network, although it now is only taking calls during East Coast business hours. The Campaign Legal Center also is staffed by lawyers and has developed legal templates that anybody could use to use to go to court to protect their right to vote; people or groups experiencing problems are urged to call.

Finding your polling place: The League of Women Voters has a polling place locator on its home page, lwv.org.

This entry was posted in RagBlog and tagged Election Fraud, November Election. Bookmark the permalink.