Cindy McCain ‘Unsure’ How Many Half-sisters She Has 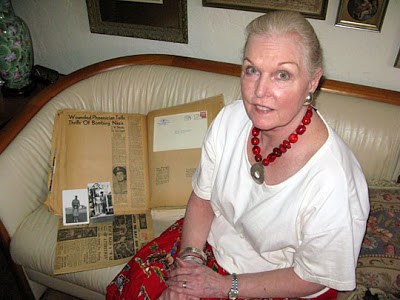 One of Cindy McCain’s half-sisters, Kathleen Hensley Portalski, showing proof of her half-sisterness. How many more are there? Get back to us. Photo by Ted Robbins / NPR.
Says staff member will handle sibling tally
By Andy Borowitz / August 22, 2008

Presumptive first lady nominee Cindy McCain responded to a reporter’s question today about how many half-sisters she had by saying that she was “unsure” about the exact number but would have “a staff member look into it.”

Ms. McCain’s claims of being an only child were clouded this week by revelations that she has at least two heretofore unmentioned half-sisters, leading to reporters’ queries as to whether more undisclosed half-siblings were waiting in the wings.

When a reporter from the Toledo Blade asked Mrs. McCain at a campaign stop in Ohio about how many half-sisters she had, she looked momentarily startled by the question before handing it off to a staff member.

Mrs. McCain’s uncertainty about the precise tally of her siblings, coming on the heels of her husband’s confusion about the number of the couples’ homes, might not be as big a problem for the McCain campaign as some might expect, says Davis Logsdon, professor of economics at the University of Minnesota.

“As long as the couple has more homes than half-sisters, they could easily house one of the half-sisters in each of the residences and keep them happy,” Dr. Logsdon says. “However, if the number of half-sisters grows faster than the number of homes, that could potentially lead to crowding.”

For his part, Sen. McCain said that the campaign would provide a “guesstimate” of how many half-sisters and homes the couple has by the end of next week: “Right now, we’re trying to put it all on a spreadsheet.”