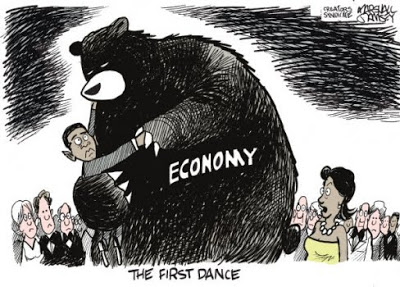 Cartoon from Orange County Register.
A year at the helm:
Does Obama make the grade?

President Obama has been in office for nearly a year now. I had not thought about grading him on his performance in that first year until I heard on the news the other day that he had graded himself. It seems that he thinks he deserves a B+. That got me thinking — what grade do I think he’s earned?

Frankly, I don’t see that much has been accomplished. When I voted for him last November, I had swallowed the campaign promise of real “change.” I had visions of a Democratic presidency along the lines of Franklin Roosevelt, Harry Truman or Lyndon Johnson — presidents who showed political courage and forever changed our country for the better.

Franklin Roosevelt took on the depression and created opportunities for common folks to work with organizations like the WPA and the CCC. He also passed social security to protect the elderly and keep them from living in abject poverty. Harry Truman was capable of making the hard decisions like whether to drop the A-bomb, and he also desegregated the Armed Forces by executive order.

Lyndon Johnson had a list of nation-changing accomplishments, including two major civil rights laws, the War on Poverty, creation of Head Start, and the creation of Medicare. There is still time left in his presidency for President Obama to join this pantheon of great Democrats, but his first year puts him only in the class of such mediocre to poor Democratic presidents as Jimmy Carter and Bill Clinton.

Let’s look first at what President Obama has failed to accomplish in his first year: 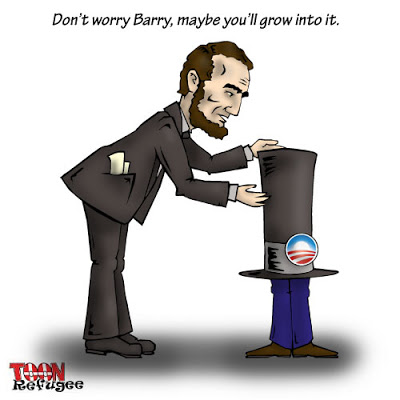 That list of inaction and failures is pretty impressive, but hasn’t he accomplished anything? Yes, he has done the following:

Considering all of the above, I cannot agree with the self-assessed B+. The grade I would give President Obama on his first year is a C-. I guess that’s better than the string of F’s earned by George Bush, but it’s not really anything to be proud of. He has not really shown any political courage, and seems to be happy with being a “caretaker” president who will make some small changes.

That’s very disappointing. I had much higher hopes. What do you think his grade should be?