Health Care Plan : No Cause for Celebration 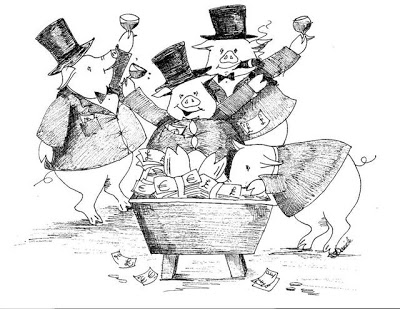 
This bill is not universal, not equitable, not affordable. It will not end bankruptcies, and will not end deaths due to denials and delays in health care.

I have been reading Charles C. Mann’s excellent book 1491, New Revelations of the Americas Before Columbus. Included is a half-joking quotation from the celebrated anthropologist Clifford Geertz:

All states can be parceled into four types: pluralist, in which the state is seen by its people as having a moral legitimacy; populist, in which the government is viewed as an expression of the peoples will; ‘great beast’, in which the rulers’ power depends on using force to keep the populace cowed; and ‘great fraud’ in which the elite uses smoke and mirrors to convince the people of its inherent authority.

It would appear that we in the current United States fit rather neatly into the fourth group. Example:

President Obama has been arguing vociferously that did he did not campaign on the public option as an alternative to health care dominated and controlled by the health insurance cartel. In my files I came upon a souvenir of that campaign, a 46 page booklet entitled “Keeping America’s Promise.” Three pages are devoted to Obama’s concept for health care; in the interest of brevity I quote only selected paragraphs.

Easy enrollment: The new PUBLIC PLAN will be simple to enroll in and provide ready access to coverage… Portability and Choice: Participants in the new PUBLIC PLAN and the National Health Insurance Exchange… will be able to move from job to job without changing or jeopardizing their health care coverage.

Does President Obama have so much on his plate that he has forgotten that he campaigned with the commitment to forcefully support a PUBLIC PLAN? Where does this omission lie in his failure to face down, or even negotiate with, such Senators as Lieberman and Nelson? Why the listless support for any progressive health care program? This is not the candidate that I, or many other progressives, voted for.

Last evening I watched my favorite opera, La Boheme, on PBS. Though not of the quality that I had seen at the Met or Opera Bastille it was well done with a first rate tenor, a pleasing soprano, and those haunting duets in the first and final acts. As I watched the failing health and finally the death of Mimi I was somehow struck that I was watching a study in health care for the poor and disadvantaged in the present day United States. Which brought me back to the problem at hand: the travesty, the fraud, that the Senate has passed in the guise of “health care for all.” Indeed something is amiss in our political process.

We should take note that, even though the health insurance cartel made such a show of opposing reform legislation, once the Senate bill passed, the following occurred: the stock of Coventry Health Care, Inc. rose 31.6%; CIGNA Corp rose 29.15; Aetna Inc. rose 27.1%; WellPoint, Inc. rose 26.6%; United Health Care Group Inc. rose 20.5%; and Humana rose 13.6%.

This bill is not universal, not equitable, not affordable. It will not end bankruptcies, and will not end deaths due to denials and delays in health care. And further, there is nothing in the legislation to bring the health insurance cartel under the anti-trust laws. Smoke and mirrors indeed!

When most people consider health care they think about physicians, nurses, adjunctive therapists — practitioners. Yet conspicuously absent in the past year’s discussion have been these very people. We hear from the politicians on CSPAN, and on the TV news shows we are inundated with the opinions of media consultants, of “experts” from the think tanks; however, rarely, very rarely, has the public had an opportunity to hear from a medical profession that has expressed 60% support for a public option.

Many, or most, physicians are tired of being vassals of the insurance cartel, and wish once again, as is still the case in most other free nations, to have the ability to make medical decisions based on medical findings and not to be subject to the profit-making needs of their insurance overlords.

The practice of medicine, from the standpoint of the patient and the physician, should not be dominated by politics, profit, or profit wrapped in the cloak of religion. Physicians for a National Health Program was founded some 25-30 years ago by a group of dedicated, idealistic physicians who realized that the machinations of the health insurance cartel would indeed turn medicine from a healing profession into a profit-making business for Wall Street.

PHNP, which now includes 17,000 members, has meticulously developed a health care plan that would include all citizens, reduce costs by 40%, and give choice to the patient and his or her doctor. The plan, in brief, would be administered by a public insurance entity, not the government. The public corporation would be overseen by a board of directors from the medical profession, academia, business, and labor, with hired managers.

There would be government oversight, not by politicians who would undoubtedly corrupt the workings, but by civil servants, as they are now incorporated in the congressional budget office. It would be treated as an independent organization, like the Federal Reserve Board or the U.S.Post Office. The structure would be apolitical as is PNHP.

Never in the extensive PNHP planning have I seen the word “abortion” mentioned. PNHP deals with health care and the practice of compassionate, caring medicine, not quasi-theological subjects. “Abortion” has been injected into the present debate by the insurance industry, playing to the “right to life movement,” as a political ploy.

On December 22, PNHP came down in opposition to the Senate Health Bill. The negatives of that bill include the individual mandate requiring that people buy private insurance policies, large government subsidies to private insurers, new restrictions on abortion, the unfair taxing of high-cost health plans, and cuts in $43 billion in Medicare payments to safety-net hospitals. Moreover, at least 23 million people will remain uninsured when the plan finally takes effect. Full details can be found here.

The American Nurses Association has also come out in opposition to the legislation. Thus, we have the corporations and their political prostitutes favoring legislation to increase the profits of the insurance industry, and the healing professions standing for the rights of the patient-physician relationship and decent affordable health care.

The apologists for the senate bill inveigh “that it is better than nothing” and that it can always “be corrected in the future.” The first statement is patently absurd, and the second unrealistic, for as sure as Obama has deserted his progressive and younger voter bases, the Democratic majorities in both House and Senate will be less than robust come 2010.

We hear that the legislation as passed provides the right to purchase insurance despite pre-existing conditions; however, few sources mention that the cost can be three times the rate otherwise. Few news outlets mention that older folks will pay much more for insurance than others. There is little mention of future cost control of the insurance premiums, largely because there has been no ongoing consideration of the continued exclusion of the insurance industry from the anti-trust laws. (Major league Baseball being the only other exemption.)

The other frightening situation is the “individual mandate” which forces everyone, under the penalty of law, to buy health insurance. Even many conservatives are rightfully disturbed by this interference with our civil liberties. Never in the history of the Republic have we been forced to buy from a public company under threat of punishment. There finally is the beginning of a debate about this problem, which we referenced some months ago in The Rag Blog.

We have a constitutional question which will ultimately end up in the courts. I would suggest reading a thoughtful discussion of the case law involved in this very important area, published in AfterDowningStreet.Org and also posted on The Rag Blog. The low cost commercial health insurance that we would be forced to buy could be loaded with co-pays and deductibles that could cost the insured $4000-5000 before the insurance becomes active.

The one encouraging feature of the Senate bill is the fact that it includes an amendment by Sen. Bernie Sanders allotting $10 billion for establishment of community health centers, providing medical and dental care, and training primary health care physicians and nurses. It is noted that Senator Sanders is working with House Majority Whip James Clyburn to include $14 billion in the House version of the legislation.

Concurrently, in the House there is a move afoot once again to consider permitting the importation of prescription medications, a feature that was recently defeated in the Senate with the odd cooperation of several of our “progressive” senators. If these provisions become law many of our citizens will have the same access as our elected representatives, who have free government health care at the Office of The Attending Physician right under the Capitol dome. Here they get free health care from physicians, specialists, nurses, med-techs, pharmacists and others working as government employees.

As Jim Hightower points out,

The service is primo. Let’s say that one of the 39 Republican grumps gets gaseous or suffers a tongue cramp while giving a Senate speech denouncing socialism. He or she can scoot just a few yards away for socialized care at the OAP — no appointment necessary, no bothersome insurance forms to fill out, no co-pay, no waiting. Just care.

Perhaps even President Obama will set aside much of Rahm Emanuel’s advice and once again come on board as a friend of the young, the disadvantaged, and the unemployed, rather than being the cat’s paw of Wall Street and the corporations that dominate our society.

As I look around, it seems that things have changed little since Eugene V. Debs spoke in 1908:

Now my friends, I am opposed to the system of society in which we live today, not because I lack the natural equipment to do for myself but I am not satisfied to make myself comfortable knowing there are thousands of my fellow men who suffer for the barest necessities of life.

We were taught under the old ethic that man’s business is to look out for himself. That was the ethic of the jungle; the ethic of the wild beast. Take care of yourself, no matter what happens to your fellow man. Thousands of years ago the question was asked; ‘Am I my brothers keeper?’ That question has never yet been answered in a way that is satisfactory in a civilized society.

Yes, I am my brother’s keeper. I am under moral obligation to him, that is inspired, not by any maudlin sentimentality but by the higher duty I owe myself. What would you think if I were capable of seating myself at a table and gorging myself with food and saw about me the children of my fellow beings starving to death.

We progressives must stand up and support the few dedicated, honorable senators, and we know who they are, who are a profile in courage and who fight like hell for the public good.

We must encourage the progressive caucus in the House of Representatives to stand their ground on funding of the health care bill by requiring the wealthy to pay their fair share rather than burdening the working man with further taxes. We must encourage the progressive caucus to stand firm for a public option and to demand that the health insurance industry be included under the anti-trust in order to prevent price fixing and excessive rate increases.

We become the Greeks at Marathon, the final defense of what is ethical and morally correct.

3 Responses to Health Care Plan : No Cause for Celebration