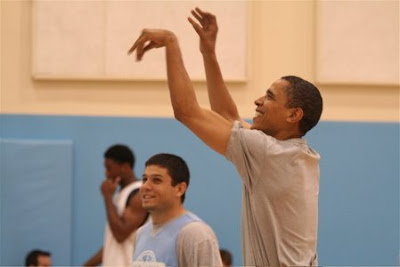 ‘Our early take must hinge on how much we believe in Obama’s long-term commitment to at least a modicum of progressive change and his ability to listen, to incorporate the ideas of others, and to use their skills to make him a more effective leader.’

There has been understandable disappointment among many progressives over President-elect Barack Obama’s early appointments; moderates have praised the choices as a smart and pragmatic first step. There is little doubt, however, that the team so far assembled is packed with unprecedented brainpower and a track record of getting things done. And Obama’s choices certainly show his personal confidence: he clearly thrives on having strong-willed people around him, many of whom not only disagree with some of his tenets, but with each other’s as well.

Our early take must hinge on how much we believe in Obama’s long-term commitment to at least a modicum of progressive change and his ability to listen, to incorporate the ideas of others, and, bottom line, to use their skills and judgments to make him a more effective leader.

And we can hope at least that even the choice of Rahm Emanuel, with his reactionary foreign policy history, is based on the man’s undeniable skills as one who makes things happen and Obama’s calm certainty that he well be the one determining what those things are. We’re talking “decider” here.

One can conclude this: in the realm of brainpower, Obama can hold his own with the best and there’s scarce liklihood of a Dick Cheney (or a Joe Lieberman!) perched on his shoulder issuing whispered directives.

Part of Barack Obama’s strategy — his preemptive strike — is to incorporate and thus neutralize the opposition. To buy into this you must be willing to make a leap of faith: that Obama knows what he’s doing, that he will be able to make it work, and that his projected endgame will be to our liking.

Put this in your pipe: Obama will do things that cause the left to feel despair and outrage. True as the sun will rise. But also remember that even the most committed leftist president — dedicated to constructing, say, a European style socialist government in these United States — could, in reality, do little. Might be the very best we can hope for is some diminution of the corporate stranglehold and an incremental move in the direction of economic democracy.

And, if there’s still room in that pipe: We will not finally end war in our lifetime. Certainly won’t get the troops home from Iraq as quickly as we should and much of that momentum will most likely just be transferred to Afghanistan. American imperialist foreign policy will continue to ride high in the saddle, even without a faux Texan “yippee-yi-yo”-ing at the reins; however, a steadier and more enlightened hand should result in a turn back to diplomacy and away from waterboarding. And our community organizer president-to-be could make– already is — a real difference in the tone of world politics, a return to civility, as they say.

A diffusing of the extremist momentum poisoning the world could be a legitimate expectation. Though words and tone must be accompanied by a serious commitment to addressing the social conditions at the core of the problem. I don’t believe it’s too much of a stretch to expect that of an Obama presidency.

Seems the prudent thing to this moldy observer that we reserve judgment at least until the man takes office. And those of us holding out hope for this presidency should keep in mind that conditions — especially the economy — mitigate strongly for progressive solutions. An expansive public works project appears inevitable. And I, for one, wouldn’t be surprised to see even the neo-liberal Clintonites, newly unfettered by the pull of cynical triangulation — the whole damn pack — move solidly to the left.

And then again: if this be delusion, we should all be perched to pounce.

Below E. J. Dionne sheds a bit of light on the recently annointed Obama team, which he says informs the expectation that our next president will govern as both a progressive and a pragmatist.

President-elect Barack Obama has now made three things clear about his plans to bring the economy back: He wants his actions to be big and bold. He sees economic recovery as intimately linked with economic and social reform. And he is bringing in a gifted brain trust to get the job done.

Just three weeks after Election Day, Obama has already expanded his authority by seizing on “an economic crisis of historic proportions,” as he described it yesterday, to call for a stimulus package that will dwarf anything ever attempted by the federal government.

But Obama is also using the crisis to make the case for larger structural reforms in health care, energy and education — “to lay the groundwork for long-term, sustained economic growth,” as he put it. Obama clearly views the economic downturn not as an impediment to the broadly progressive program he outlined during the campaign but as an opportunity for a round of unprecedented social legislation.

“He feels very strongly that this is not just a short-term fix but a long-term retooling of the American economy,” said one of Obama’s closest advisers. “Obama has a holistic view of the economy. Health care is going to be part of it,” the lieutenant told me, and so will green energy investments, education reform and a new approach to regulating financial markets.

Obama further underscored his decision to tether social and economic policy by linking his announcement of Melody Barnes as the director of the White House Domestic Policy Council to the unveiling of his economic team.

Some who know Summers, a man with a large personality, were surprised that he would take the job as inside-the-White-House economic adviser and accept the appointment of Geithner, the president of the Federal Reserve Bank of New York, as Treasury secretary.

But Obama’s aides are making clear that Summers is being assigned a large role in shaping the administration’s overall economic policy, and his White House post will free him from the day-to-day responsibilities of running the Treasury Department — duties well suited for Geithner, widely seen as a good manager and also as an economic diplomat likely to broker international cooperation in stemming the downturn. The fact that Summers and Geithner have a long history of working together should ease potential conflicts.

The senior Obama adviser said the president-elect benefited from Summers’s desire to be at the center of the action during the greatest economic crisis since the Great Depression. “If ever there was a time to want to be involved, it’s now,” said the adviser, who added that Obama, in turn, sees Summers as “brilliant.”

Obama got to know Geithner “during the final weeks of the campaign,” said the senior Obama aide, and the two hit it off immediately. Like Obama, Geithner had partly grown up abroad, and this gave the two an immediate connection. It led to “an ease in conversation,” and the two discovered they “also share a common temperament,” including a calm demeanor and a curiosity about the thinking of others.

“When Obama emerged from the first meeting, he was very effusive,” said the senior aide. “He said, ‘I feel good about him as a person; he inspires confidence.’ ” Geithner did not campaign for the job, which only sent his stock higher in the Obama circle. “He suggested that others might be better, that he might be more useful where he is,” said the Obama lieutenant. “That was impressive as well.”

Obama’s selection of a team of highly skilled pragmatists has already been described as a move to the political center, but Obama advisers and longtime acquaintances say that this is a misreading of the incoming president and his approach. They describe it as combining a practicality about means with an overriding concern about the corrosive effects of growing economic inequalities.

Aides say that Obama was drawn to Summers in part because the former Harvard president shares the president-elect’s passion for a more equitable distribution of economic benefits. Obama was impressed during campaign policy discussions that Summers would often pull the conversation away from general talk about economic growth to a concern with the living standards of families with average incomes.

Washington often divides the Democratic policy world between progressives and pragmatists. With Obama, as yesterday’s news conference showed, it will have to become accustomed to a president who is both.