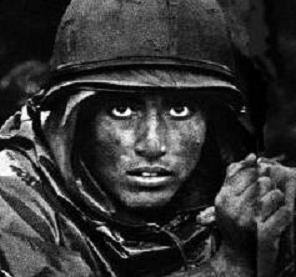 A friend of mine who’s a librarian was recently reviewing job applicants. Asked his qualifications in library skills, one man put “machine-gunner.” He was a vet who’d served in Falluja. The library is in a state school here in the US that, last fall, had 650 such vets enrolled. The young man got the job but soon became irked by what he saw as the trivial preoccupations of his colleagues. He applied for a job at a nearby police department. All over the country police departments are advertising for Iraq vets. Three-quarters of the way through the hiring process, the PD signaled to him that things looked good. Then, in rapid succession, three Iraq vets in the area were involved in lethal episodes: two murders and one suicide. The PD immediately called the young man in for a second psychological evaluation, then nixed him for the job. He’s 24. He can’t find anything satisfying to do and is thinking of re-enlisting. He’s against the war.

Those violent episodes are just part of bringing the war home. It’ll be active on the home front for years to come. Just under one in three—31 percent—of those who’ve been deployed in Iraq and Afghanistan suffer from a brain injury or stress disorder or a mix of both these conditions.

On April 17 the RAND Corporation released a study of service members and veterans back home from Iraq and Afghanistan. The 500-page study was titled Invisible Wounds of War: Psychological and Cognitive Injuries, Their Consequences, and Services to Assist Recovery. It was sponsored by a grant from the California Community Foundation and done by twenty-five researchers from RAND Health and the RAND National Security Research Division. From last August to January, the team conducted a phone survey with 1,965 service members, reservists and veterans in twenty-four areas across the country with high concentrations of those people. Some had done more than one tour.

The Associated Press and major newspapers outlined the RAND report’s astounding numbers and then the story slid from view, which is a very bad thing, since the report disclosed in compelling numbers that the wars in Iraq and Afghanistan are steadily filling every American community with psychologically and physically mutilated victims of war. Many of them will endure lives saturated with physical pain and mental turmoil or confusion. A proportion will be prone to alcoholism, drug use and violence, sometimes deadly. Their partners and their children will suffer all measure of scarring.

Pentagon data show that more than 1.6 million military personnel have deployed to the conflicts since the war in Afghanistan began in late 2001. The RAND study put the percentage of those suffering from PTSD and depression at 18.5 percent, thus calculating that approximately 300,000 current and former service members were suffering from those problems at the time of its survey.

Some 320,000 service members, about 19 percent, according to RAND, may have experienced a possible traumatic brain injury while in a war zone. These injuries have ranged from concussions to severe head wounds. Julian Barnes, in the Los Angeles Times, pointed out in his April 18 story that “a chief difference is that in Iraq and Afghanistan all service members, not just combat infantry, are exposed to roadside bombs and civilian deaths. That distinction subjects a much wider swath of military personnel to the stresses of war.”

“We call it ‘360-365’ combat,” Paul Sullivan, executive director of Veterans for Common Sense, told Barnes. “What that means is veterans are completely surrounded by combat for one year. Nearly all of our soldiers are under fire, or being subjected to mortar rounds or roadside bombs, or witnessing the deaths of civilians or fellow soldiers.”

The RAND report says that about 7 percent suffered from both a probable brain injury and current PTSD or major depression. Only 43 percent reported ever being evaluated by a physician for their head injuries. Only 53 percent of service members with PTSD or depression sought help over the past year. Various reasons were offered to RAND researchers for not getting help, including worries about the side effects of medication, reliance on family and friends to help them with the problem and fear that seeking care might damage career prospects.

The news stories tended to lay stress on the fact that almost half of those with brain injuries or suffering from depression and stress disorder were seeking help. As Terri Tanielian, the project’s co-leader and a researcher at RAND, told the Associated Press, “There is a major health crisis facing those men and women who have served our nation in Iraq and Afghanistan.”

Missing amid the brief stir aroused by this devastating report was any adequate editorial commentary, or inquiry to political candidates, about the obvious fact that every month that US troops remain deployed in Iraq and Afghanistan adds inexorably to this terrible total. But discretion is the order of the day, exemplified by Dr. Ira Katz, top mental health official at the Department of Veterans Affairs, who, as CBS News reported on February 13, e-mailed an aide, “Shh! Our suicide prevention coordinators are identifying about 1000 suicide attempts per month among veterans we see in our medical facilities.”

Here’s how the figures add up, just for Americans. The wars in Afghanistan and Iraq have thus far produced 300,000 psychological casualties, 320,000 brain injury casualties, plus 35,000 (probably understated) officially reported “normal” casualties. This adds up to 655,000 US casualties in Iraq and Afghanistan, an average of just under 101,000 Americans killed or wounded every year since the wars began. If the idea of 101,000 casualties for every extra year in Iraq and Afghanistan gets out and infects the voting public, imagine the effect on the currently torpid national debate over leaving in five years versus fifteen years!

This entry was posted in RagBlog and tagged Iraq, Middle East, Military. Bookmark the permalink.