Class is not a Clinton Forte 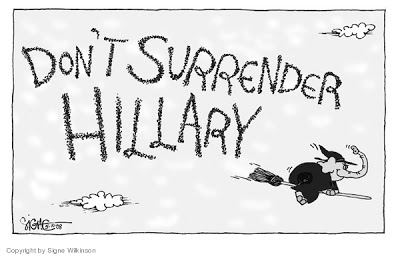 The Clintons have never understood how to exit the stage gracefully.

Their repertoire has always been deficient in grace and class. So there was Hillary Clinton cold-bloodedly asserting to USA Today that she was the candidate favored by “hard-working Americans, white Americans,” and that her opponent, Barack Obama, the black candidate, just can’t cut it with that crowd.

There is, indeed. There was a name for it when the Republicans were using that kind of lousy rhetoric to good effect: it was called the Southern strategy, although it was hardly limited to the South. Now the Clintons, in their desperation to find some way — any way — back to the White House, have leapt aboard that sorry train.

The Clintons have been trying to embed that gruesomely destructive message in the brains of white voters and superdelegates for the longest time. It’s a grotesque insult to African-Americans, who have given so much support to both Bill and Hillary over the years.

(Representative Charles Rangel of New York, who is black and has been an absolutely unwavering supporter of Senator Clinton’s White House quest, told The Daily News: “I can’t believe Senator Clinton would say anything that dumb.”)

But it’s an insult to white voters as well, including white working-class voters. It’s true that there are some whites who will not vote for a black candidate under any circumstance. But the United States is in a much better place now than it was when people like Richard Nixon, George Wallace and many others could make political hay by appealing to the very worst in people, using the kind of poisonous rhetoric that Senator Clinton is using now.

I don’t know if Senator Obama can win the White House. No one knows. But to deliberately convey the idea that most white people — or most working-class white people — are unwilling to give an African-American candidate a fair hearing in a presidential election is a slur against whites.

The last time the Clintons had to make a big exit was at the end of Bill Clinton’s second term as president — and they made a complete and utter hash of that historic moment. Having survived the Monica Lewinsky ordeal, you might have thought the Clintons would be on their best behavior.

Instead, a huge scandal erupted when it became known that Mrs. Clinton’s brothers, Tony and Hugh Rodham, had lobbied the president on behalf of criminals who then received presidential pardons or a sentence commutation from Mr. Clinton.

Tony Rodham helped get a pardon for a Tennessee couple that had hired him as a consultant and paid or loaned him hundreds of thousands of dollars. Over the protests of the Justice Department, President Clinton pardoned the couple, Edgar Allen Gregory Jr. and his wife, Vonna Jo, who had been convicted of bank fraud in Alabama.

Hugh Rodham was paid $400,000 to lobby for a pardon of Almon Glenn Braswell, who had been convicted of mail fraud and perjury, and for the release from prison of Carlos Vignali, a drug trafficker who was convicted and imprisoned for conspiring to sell 800 pounds of cocaine. Sure enough, in his last hours in office (when he issued a blizzard of pardons, many of them controversial), President Clinton agreed to the pardon for Braswell and the sentence commutation for Vignali.

Hugh Rodham reportedly returned the money after the scandal became public and was an enormous political liability for the Clintons.

Both Clintons professed to be ignorant of anything improper or untoward regarding the pardons. Once, when asked specifically if she had talked with a deputy White House counsel about pardons, Mrs. Clinton said: “People would hand me envelopes. I would just pass them on. You know, I would not have any reason to look into them.”

It wasn’t just the pardons that sullied the Clintons’ exit from the White House. They took furniture and rugs from the White House collection that had to be returned. And they received $86,000 in gifts during the president’s last year in office, including clothing (a pantsuit, a leather jacket), flatware, carpeting, and so on. In response to the outcry over that, they decided to repay the value of the gifts.

So class is not a Clinton forte.

But it’s one thing to lack class and a sense of grace, quite another to deliberately try and wreck the presidential prospects of your party’s likely nominee — and to do it in a way that has the potential to undermine the substantial racial progress that has been made in this country over many years.

The Clintons should be ashamed of themselves. But they long ago proved to the world that they have no shame.

This entry was posted in RagBlog and tagged Clintons, Hillary, Presidential Campaign, Race. Bookmark the permalink.