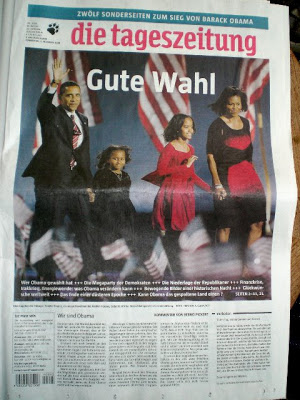 Die Tageszeitung: ‘As Obama so often said: Change is not about me, it is about you. Europeans should feel addressed by that.’
By David MacBryde / The Rag Blog / November 14, 2008

BERLIN — After the election, the headline of the radical German daily newspaper Die Tageszeitungis a pun: “Gute Wahl” means both “good choice” and “good election.” They were happy that their favorite won, and that the election process worked, was not stolen as some had feared.

Media background information: The Tageszeitung (literally “Daily Newspaper”) can be considered, with a little stretch, to be a younger sister of The Rag. How so? The Rag was an “alternative” paper published in Austin, Texas from 1966 to 1977. [The Rag was originally edited by The Rag Blog’s Thorne Dreyer, and Carol Neiman; The Rag Blog is The Rag’s spiritual stepchild.] The Tageszeitung was founded in 1979 as an alternative platform in the local media landscape, after others in Germany had tried to start “leftist papers” that were usually sectarian and usually dull, and failed.

Younger, back then, Germans had been impressed by new forms of civic actions in the US civil rights and free speech movements. The alternative papers in the US were seen by some here, and for example the Furry Freak Brothers [Gilbert Shelton’s sixties underground comic strip that originated in The Rag] got laughs, and respect. Now, while the TAZ is radically critical of aspects of US policies and society, there is a lot about the USA that is appreciated and respected.

“So there he is now. The favorite candidate in the world has also been able to convince the US Americans that he is the right guy for the White House. That is good so. A day worthy to be thought about, an historical chance — not only for the USA. Does anyone still remember that vanguard thinker of the neo-conservatives, Robert Kagan, who announced in 2003 that in strategic and international issues the USA and Europe were so far apart, like coming from the different planets Mars and Venus? If there is any possibility with a politician of getting us down to earth, and together, then it is with Obama. Europeans would be crazy not to use this chance.

“However of course Obama was not elected president of Europe. For many years the European Governments have asked to be listened to. But actually what do they have to say? Now that Obama has been elected, what are the Europeans going to do? For a long time it has been easy for the German government to hypocritically criticize US mistakes and dominance verbally, but often remain passive. It would be better to come up with our own suggestions to put on the table (e.g. Afghanistan). It could be good for the potentially new relations with the USA under President Obama if he could meet with allies who did not duck issues or waited, but thought for themselves. As Obama so often said: ‘Change is not about me, it is about you.’ Europeans should feel addressed by that.”

A test of that, and, looking forward, also a tip about something to keep an eye open for: this weekend, Nov. 15, 2008, the “financial summit” meeting in Washington will be “interesting”. I do not expect any detailed decisions there, and do not know anyone who does, given the lame duck US administration and their position on issues. But there will be an effort to set up a working agenda and a time frame looking at March to get results. One historical point of reference: A year and a half ago at the “G8” richest country summit in Germany there was a theatrical blockade outside. Inside, the real blockade was by the Bush administration, which blocked the issue of the growing financial crisis from being put on the agenda. Now a broader range of countries intend to take initiative.

For now, and for the future,
David MacBryde
your correspondent in Berlin